Those whom we trust must lead | Inquirer Opinion
Close
menu
search

Those whom we trust must lead 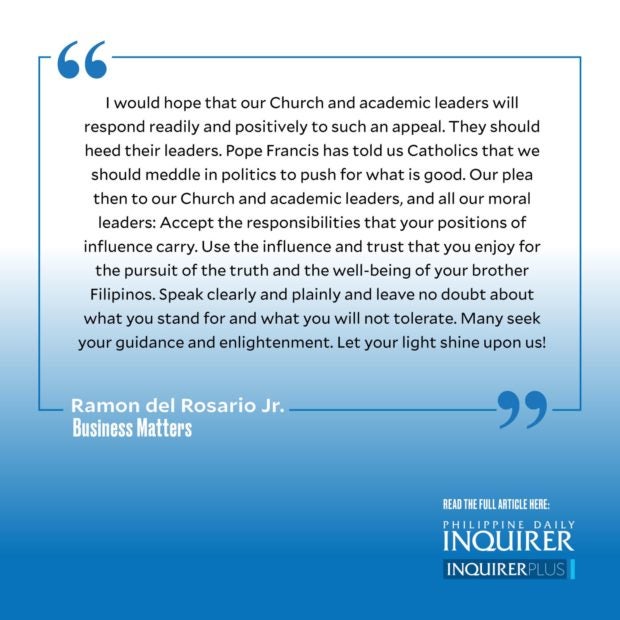 As we view our country’s prospects for electing in May 2022 a competent, strong, and upright president who is truly dedicated to improving the lives of Filipinos, many of us are dismayed at the recent surveys that show Ferdinand Marcos Jr. as the leading candidate preferred by over 50 percent of the respondents, and the best qualified candidate, Vice President Leni Robredo, lagging behind at barely 20 percent.

We are told that the apparent popularity of Marcos Jr. is the result of huge resources poured into a campaign of disinformation and historical revisionism, weaving through troll farms tall tales of a golden era of economic prosperity and well-being for the Filipino people. They brag that during the Marcos years, the Philippines was the second most highly developed economy in Asia, next only to Japan. Left out is the detail that by the time Ferdinand Marcos was deposed in 1986, the Philippine economy had been plundered and gouged by the conjugal dictators and their cronies to become the second WORST economy in Asia! And to this day we continue to pay the price for their plunder.

What then can be done? As former Ateneo president Fr. Jett Villarin likes to point out, our greatest advantage is that the whole Marcos narrative is built on a myth, on a mountain of lies and untruths. We don’t need lies to combat theirs, we need only to get people to hear and believe the truth.

We can mobilize truth armies to neutralize their trolls, but we know that they will overwhelm our efforts through massive disinformation using massive resources. Still we must try, by being smarter in the use of our resources, picking our messages and directing them where they matter the most. Yet this may not be enough.

Beyond getting people to listen, how do we get them to believe and accept the messages of truth? For most of us, this has to do mostly with where the message is coming from, who is sending it. Do we trust the source? If we do, we consider the material valid, credible, worth accepting and sharing.

So as we have this daunting challenge of combating within an extremely narrow period of three months a patently false and destructive narrative, and our response will have to be messages of truth that must be heard, accepted and believed, we must turn to those who enjoy the trust of our people and plead with them to be messengers of the truth and our active partners in this crusade to preserve our democracy.

And who might these be? Surveys have consistently ranked two institutions at the top of the trust index: the Church and the Academe. We as a people trust our bishops and priests, our religious Sisters and Brothers, our educators, our teachers. For better or for worse, we believe them and are more likely than not to follow their advice.

I would hope that our Church and academic leaders will respond readily and positively to such an appeal. They should heed their leaders. Pope Francis has told us Catholics that we should meddle in politics to push for what is good. Our leading bishops have told us that what we face are not issues of partisan politics, but of basic moral questions of good and evil, truth versus lies, of genuine public servants wishing to uplift the lives of our people against a phalanx of liars, plunderers, tax evaders, and traitors who would trade off our national patrimony for greed and personal wealth. Moreover, this fight against fake news and revisionism, for facts, science, and the truth, goes beyond one election and is ultimately a struggle over the soul of our people and nation.

Our plea then to our Church and academic leaders, and all our moral leaders: Accept the responsibilities that your positions of influence carry. Use the influence and trust that you enjoy for the pursuit of the truth and the well-being of your brother Filipinos. Speak clearly and plainly and leave no doubt about what you stand for and what you will not tolerate. Many seek your guidance and enlightenment. Let your light shine upon us!

With your shining light, perhaps we can achieve our hope that on Sept. 21, 2022, the 50th anniversary of the declaration of martial law, we will be marking, not the return of the descendants of the dictator and their co-conspirators to their “golden era,” but the triumph of a people who chose truth, decency, integrity, competence, compassion, selflessness, patriotism, and democracy as their path to a better, more just and progressive Philippines.