A win for children, parents

In the debates and deliberations on the recently-signed act simplifying procedures for local adoptions, one figure’s presence loomed large in the background.

That figure is none other than Sen. Grace Poe, the adoptive daughter of the late action movie king (and presidential aspirant) Fernando Poe, Jr., and still reigning movie queen Susan Roces. Senator Poe was found while still an infant in the baptismal font of a church in Jaro, Iloilo, and, through a network of family friends, was adopted by the movie star couple.

The senator has since gone on to run for president, coming in third in the race. Her very presence in the halls of the Senate is proof that, given loving parents, a good education, and the child’s innate capacities, even a foundling can one day aspire for the highest elective office in the land.

Signed into law by President Duterte on Jan. 6, Republic Act No. 11642, also known as the Domestic Administrative Adoption and Alternative Child Care Act, creates the National Authority for Child Care under the auspices of the Department of Social Welfare and Development (DSWD). The law also effectively removes the authority of local courts to decide on petitions for adoption, a development that shortens the process of adoption from as long as two to three years to only six to nine months.

Sen. Risa Hontiveros who, as chair of the Senate committee on women, children, family relations, and gender equality, shepherded the legislation through the chamber, said the law’s passage is a “win for our children, but most especially, for adoptive parents.”

Hontiveros cited statistics showing that only 60 percent of adoption cases in the country are finalized within a year or up to three years. Many take up to four years or longer to resolve, with families ending up “spending hundreds of thousands of pesos in these lengthy proceedings,” the senator said. 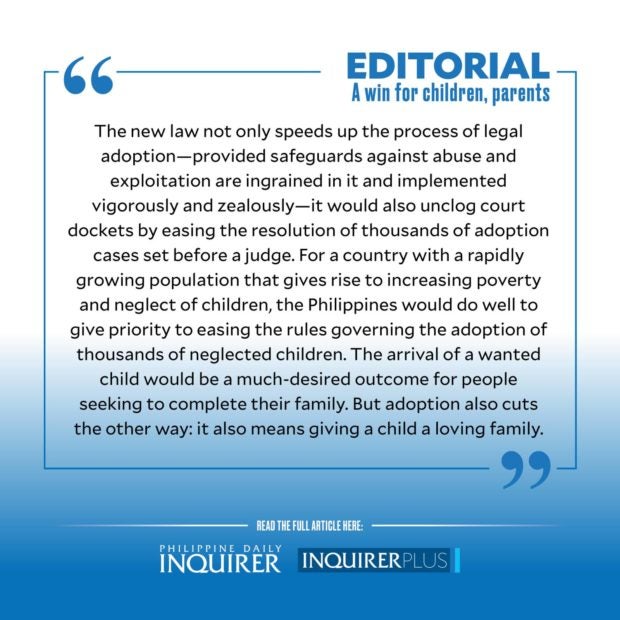 Much of the expense entailed has been blamed on the court system, with delays in court proceedings hampered by the lack of judges and other factors such as the retirement or transfer of a judge hearing the case.

The tedious, time-consuming process of adoption, said Romeo Brosas, himself an adoptive father of two, has led many families to simply give up on legal adoption. Many have been driven to settle for informal arrangements or resort to using fake birth certificates, which provide no protection for the adopted child.

Under the present system, prospective parents must go through both administrative and judicial processes before they can legally adopt. After attending forums to assess their motivation for adopting a child and being counseled by a licensed social worker, parents are required to submit medical, financial, and other requirements to the DSWD or accredited child-placing agencies. A social worker would then visit their residence to assess their capacity to care for a child, after which they would be “matched” with one. Once approved, the couple would be granted pre-adoption authority for a trial period of six months, with a social worker paying regular visits and assessments. Only after this would the judicial phase begin, with the couple, in essence, starting over, submitting a separate set of documents and presenting a new set of witnesses and testimonies. Only upon completion of the hearings would the petition for adoption be heard and an amended birth certificate issued.

Brosas was certainly not joking when he said the court process that the prospective parents undergo is a “redundancy,” since the judge would still rely on the expertise and experience of a social worker to testify on the couple’s fitness. The new law not only speeds up the process of legal adoption—provided safeguards against abuse and exploitation are ingrained in it and implemented vigorously and zealously—it would also unclog court dockets by easing the resolution of thousands of adoption cases set before a judge.

For a country with a rapidly growing population that gives rise to increasing poverty and neglect of children, the Philippines would do well to give priority to easing the rules governing the adoption of thousands of neglected children. The arrival of a wanted child would be a much-desired outcome for people seeking to complete their family. But adoption also cuts the other way: it also means giving a child a loving family.