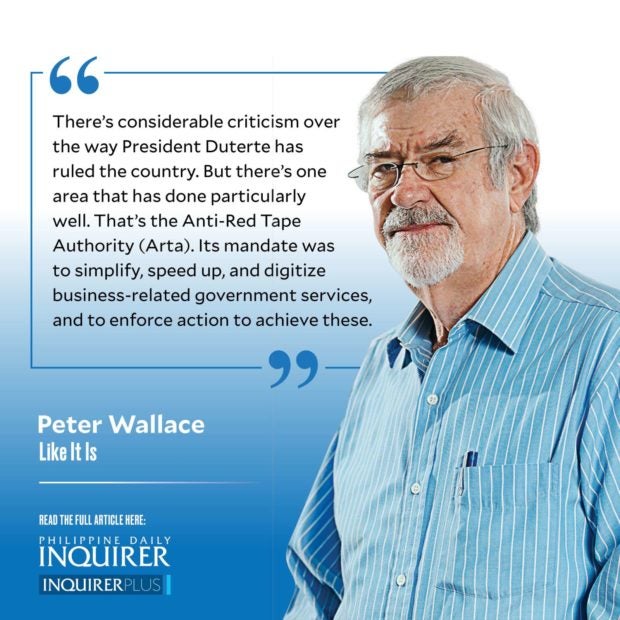 There’s considerable criticism over the way President Duterte has ruled the country. But on the economic, business side, he and his team, led by Finance Secretary Sonny Dominguez, have accomplished a great deal, with substantial reforms achieved and an economy that despite COVID-19 has remained stable (it’s retained its credit ratings and kept debt manageable).

But there’s one area, where I’m involved, that has done particularly well. That’s the Anti-Red Tape Authority (Arta). Its mandate was to simplify, speed up, and digitize business-related government services, and to enforce action to achieve these. As the year ends, I’d like to summarize its performance.

It’s to the credit of Trade Secretary Mon Lopez how Arta has been pulled together and performed so well. I’ve been particularly impressed by the dynamism and dedication of its leader, director general Jeremiah Belgica, with deputy director general Nes Perez providing the backroom support.

Arta was created through a law, Republic Act No. 11032, that is called the Ease of Doing Business (EODB) law. The title says it all. It’s supposed to make doing business with government easier. In the three years of its existence, it has. But still has much more to do. To move faster and with wider impact, it needs more staff. And, like everyone, more money. And a faster-moving judicial system to enforce the penalties Arta exposes.

Much of Arta’s work has centralized around digitizing all services for business. It has developed an online platform that helps local government units with limited resources to digitize their processes and services. Under this application, LGUs can store, retrieve, manage data, and use these analytics in making decisions.

One of the more important actions achieved has been the initiation of the NEHEMIA Program (National Effort for the Harmonization of Efficient Measures of Inter-related Agencies), which is a sectoral-based interagency streamlining initiative whose target is a 52-percent reduction in the time, costs, requirements, or procedures for key sectors of the society.

An example of what’s been achieved under NEHEMIA is the building of cell towers where the number of permits has been reduced from 30 to eight, whilst the number of requirements are now 35 from 86, and a processing time of 16 days from an absurd 241.

Arta has been putting pressure on government agencies to create a Citizen’s Charter. This is a document that contains information the public can easily access on the services and procedures a government agency requires in dealing with them. As of April 2021, 83 percent of the agencies covered in the EODB law have complied with the submission of this charter.

The agency also issued a memorandum circular on the mandatory onboarding of trade regulatory government agencies to the TradeNET, which will be used as the Philippine National Single Window. The TradeNET is an online platform for the automation of licensing, permits, clearance, and certification for trade regulatory agencies such as the Bureau of Customs (BOC) and the National Tobacco Administration to use.

Arta director general Belgica has also been making personal visits to local government units and national government agencies to monitor their compliance with the EODB law and inform them on the mandate of Arta. As of June 2021, 91.2 percent of cities and municipalities are deemed compliant in both the revised standards for new business application and business renewal.

Two web-based platforms are also being developed in order to create a whole-of-government information system. First is the Philippine Business Regulations Information System which is a platform that provides real-time information on the regulatory management system and changes in laws and regulations that are relevant to the public. The second platform is the Anti-Red Tape Electronic Management Information System which allows government agencies to submit and update their Citizens’ Charter in real time.

It also issued a memorandum circular which provided general guidelines on the issuance of permits and licenses under the new normal. These include, among others, reduction of requirements, electronic submission and acceptance, reduction of signatories, and use of e-signatures. Included was a requirement for the BOC and the Food and Drug Administration to set up a business one-stop shop for COVID-19 critical commodities for commercial distribution. Arta was actively involved in the creation of the “green lane” to speed up the processing of permits for COVID-19 vaccine production.