Giving up my desire for fame 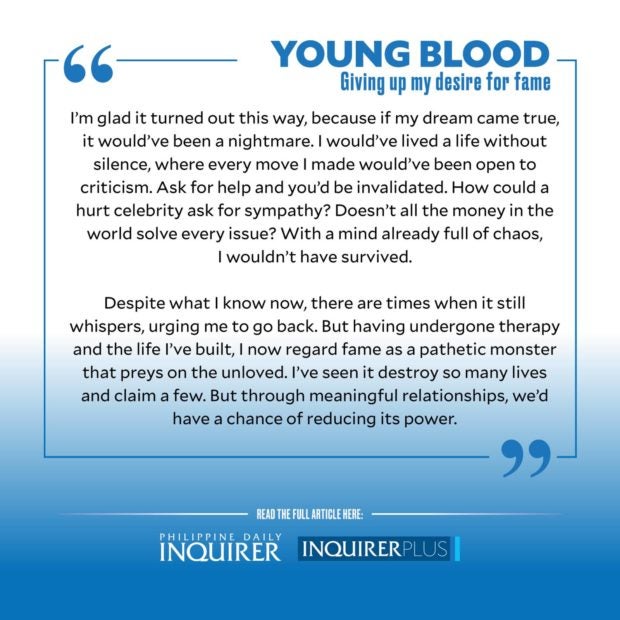 I remember making a promise with an old friend of mine that one day we’d become famous actors.

We imagined ourselves being featured in magazines, commercials, and TV shows. We even took turns interviewing each other, pretending we were celebrities.

We dreamed so big because we felt so little.

In school, we were treated as outcasts, ruthlessly mocked for our physical and mental flaws. At home, we felt misunderstood. It was only when we were together that the ringing in our heads would stop, because we’d replace the loud echoes with kind words. Ultimately, my friend’s dreams came true, but mine turned into a relentless chase that made my life even more unbearable than it was.

I made a series of attempts to make it happen—each one more humiliating than the last. For years, I wondered why it wasn’t working for me, and it didn’t help that my friend’s face was on almost every platform. Yes, I was proud of him, but I felt left behind.

Yet, despite everybody telling me to stop, I kept persisting in this path, believing that it would lead me to a cure. But my ambition, blinded by my desperation for approval, came to a halt when the mental strain became intolerable. I began to wonder how many more risks I needed to take before I lost myself to madness.

But letting go of a dream you’ve pursued for so long felt like suicide. My whole identity was latched on to the idea of becoming a celebrity. I had already fantasized myself mingling with the rich and famous, being followed by the paparazzi, and receiving love and admiration from millions of people. I wanted to feel special. In my head, if I ruled the world, I’d no longer feel like the little kid who felt cold and cornered.

Unfortunately, the price of keeping this dream alive was letting the past dictate my life. To keep chasing fame is to continually convince myself that my life isn’t worth living in any other way. But could you blame me?

Being in the digital world makes it so hard to accept who you are. You’re constantly bombarded with images of perfectly chiseled bodies and of young, talented people who have changed the world. You interpret their likes, comments, and shares as “love,” so you try to be like them. And when you’re in a sea of extraordinary people, it’s easy to get caught in a whirlpool of insecurity and lose yourself.

Luckily, my mother pulled me out. She told me that she once felt worthless like I did. But ever since she gave birth to me and my brother, it became her mission to give us the best life that she could. And she did. So did my father who sacrificed his life by working abroad. My parents didn’t need to be famous to be great, they just needed to give us enough love.

This realization broke down the wall between my desire for fame and the life I couldn’t see. In my life, I have family, friends, and co-workers who deeply care about me. I have a pen and paper and a bunch of good ideas that I could turn into stories. It wasn’t too late to start over.

In hindsight, I’m glad it turned out this way, because if my dream came true, it would’ve been a nightmare. I would’ve lived a life without silence, where every move I made would’ve been open to criticism. Ask for help and you’d be invalidated. How could a hurt celebrity ask for sympathy? Doesn’t all the money in the world solve every issue? With a mind already full of chaos, I wouldn’t have survived.

Despite what I know now, there are times when it still whispers, urging me to go back. But having undergone therapy and the life I’ve built, I now regard fame as a pathetic monster that preys on the unloved. I’ve seen it destroy so many lives and claim a few. But through meaningful relationships, we’d have a chance of reducing its power.

Now more than ever, we need each other. In a global crisis, it no longer matters who you are or where you come from, any love you can give will suffice. And I hope that we’d still keep this spirit even after the pandemic.

But the most meaningful relationship I’ve developed was with myself. Healing wasn’t easy, but I started by letting go of resentment and retribution toward those who have wronged me. With this, I learned how to accept my life for what it was, and not for what it could’ve been. It turns out that my ordinary life hasn’t ceased to be good enough in giving up my desire for fame. It merely propelled the beginning of a new journey.

To my friend, I’m sorry I broke my promise. We were both hurt and had to find a way out. The tunnel extended beyond what we could endure, and we didn’t know whether there was any light at the end of it. But it shone brightly for you and led you to a successful acting career. As for me, I found myself.

Alex Jasper G. Tan, 23, spends most of his spare time reading, writing, and watching movies with his loved ones.