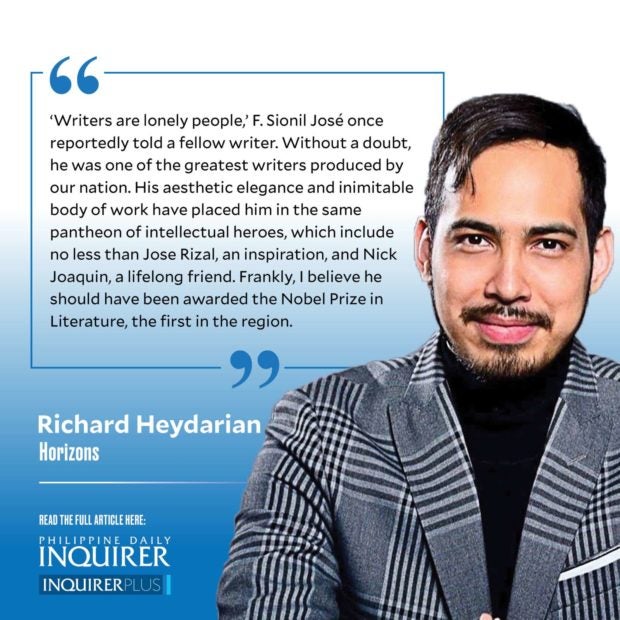 Writers are lonely people,” F. Sionil José once reportedly told a fellow writer. Without a doubt, he was one of the greatest writers produced by our nation. His aesthetic elegance and inimitable body of work have placed him in the same pantheon of intellectual heroes, which include no less than Jose Rizal, an inspiration, and Nick Joaquin, a lifelong friend.

Frankly, I believe he should have been awarded the Nobel Prize in Literature, the first in the region. In a heartfelt essay entitled “The Unrewarded,” the late Benedict Anderson rightly pointed out that the southeast is one of the few regions, which the Nobel committee has yet to fully acknowledge for its literary contributions.

From West Asia (Orhan Pamuk), North Africa (Naguib Mahfouz), and Eastern Europe (Svetlana Alexievich) to Latin America and Sub-Saharan Africa, a whole host of postcolonial writers have been recognized at the highest levels for their contributions to stirring national consciousness and elevating world literature to new heights. But not in Southeast Asia.

One likely reason for this anomaly, Anderson pointed out, is the region’s linguistic traumas following centuries of Western colonization. There is, however, also the element of underappreciation of Southeast Asian linguistic traditions, thus “[n]one of the national languages of Southeast Asia has any transnational aura.”

From Amir Hamzah to Pramoedya Ananta Toer, the region has produced some of the most talented and brave writers of the 20th century, who happened to write in their traditional languages.

And this brings us to Rizal, who wrote in Spanish, and even contemplated writing his second novel in French, thus allowing him to transcend prejudices against indigenous languages and, accordingly, stand as a top contender for the highest honor in literature.

To keen observers such as Anderson, it became crystal clear that Rizal was exquisitely talented: the elegance of his prose, the richness of his variegated plots, and the truly global scope of his literary imagination easily placed him among the titans of early-modern writers.

But even had Rizal lived until his 60s, Anderson argues, political reasons would have likely denied him a much-deserved Nobel Prize award, since “no seriously anti-imperialist writer from any colony was acceptable until after the Second World War (the Nobel Prizes are given only to living writers).”

Throughout his long life, which spanned almost a whole century, José embodied the same combination of patriotic fervor and artistic commitment. Writing in English with pellucid prose on themes with universal appeal, José’s works were clearly accessible to a global audience in a far more egalitarian zeitgeist.

But whereas Rizal lived in the era of heroic hope, José bore witness to the steady disintegration of a once-promising nation under a succession of inept, self-serving indigenous leaders.

From Imperial Japan’s horrific acts during World War II and post-war American exploitation of its former Asian colony to China’s creeping invasion of Philippine waters in more recent years, José saw it all—and wept for his country, both in his heart and through his writings.

Just like Rizal, he zeroed in on the Philippine oligarchy as the locus of our national debacles. José saw the Filipino ruling elite not as “creative nation-builders,” but instead indolent landlords, who inherited their privileges “from the colonizers for whom they worked either as partners or as agents.” The country’s failure was not one of its ordinary people, but instead, its elite class, which failed to transform from “landlords into producers.”

Though a proud Ilocano—who loved to call me by my “Ilocanofied” name, “Karding”—José was no fan of the Marcos dictatorship, which he passionately criticized both in private and public. Nor was he a fan of President Duterte’s dalliances with China.

It’s true that while closer to becoming a centenarian, he made some unorthodox comments on the current populist in Malacañang as well as less-than-nuanced statements on the Filipino-Chinese community.

Those unfortunate deviations, however, were the upshot of his profound outrage with the sad state of the country. Till the end, Manong Frankie, as we affectionately called him, was an uncompromising patriot—a profoundly lonely struggle that he waged across almost a century unlike anyone else in our contemporary history. For me, that is his ultimate, shining legacy.