Some four months to the 2022 national elections comes a disturbing report that could undermine the integrity of this much anticipated poll exercise.

On Jan. 10, the Manila Bulletin reported the alleged hacking of the Commission on Elections (Comelec) servers, with more than 60 gigabytes of sensitive voter information reportedly downloaded, including usernames and the personal identification numbers (PINs) of the vote-counting machines (VCMs), network diagrams, IP addresses, the QR code captures of the bureau of canvassers, and the list of all user accounts of Comelec personnel.

The information, said the paper’s Tech News editor Art Samaniego, came from “white hackers” who wanted to expose the vulnerability of the Comelec servers.

You’d think the Comelec would be jolted into action by such explosive report, given that a similar data breach occurred in March 2016, less than two months before the presidential elections, which compromised the personal information of over 55 million registered voters. The hacker behind what became known as Comeleak admitted hacking the website to expose its weaknesses, and was acquitted by the Manila Regional Trial Court in February 2020.

Despite that history, Comelec officials took turns immediately dismissing the recent hacking report as “fake news’’ and questioning the paper’s “scant substantiation” of its claim. Citing the response of the agency’s information technology head, Comelec chairman Sheriff Abas said the PINs and passwords of the VCMs could not have been stolen because they were not in the system yet. “This calls into question the veracity of the hacking claim,” the Comelec said.

The National Bureau of Investigation on Saturday said it found no evidence of hacking after conducting an inspection at the Comelec warehouse in Laguna. But this has not sufficiently addressed doubts given the previous hacking incident.

Already, there are fears that some parties might exploit the pandemic to foist a No-Election scenario (No-El), claiming that the large gathering of voters, watchers, and election officials might violate COVID-19 protocols and further spread the virus. There’s also the Malacañang faction of the PDP-Laban party, led by Energy Secretary Alfonso Cusi, that formally asked the Comelec to reopen the filing of certificates of candidacy (COC) and postpone the printing of election ballots. To Comelec’s credit, it unanimously dismissed the petition of the PDP-Laban Cusi wing, even if it meant that the ruling political party would end up with no presidential and vice-presidential bets, as the COC filing had ended on Oct. 8. 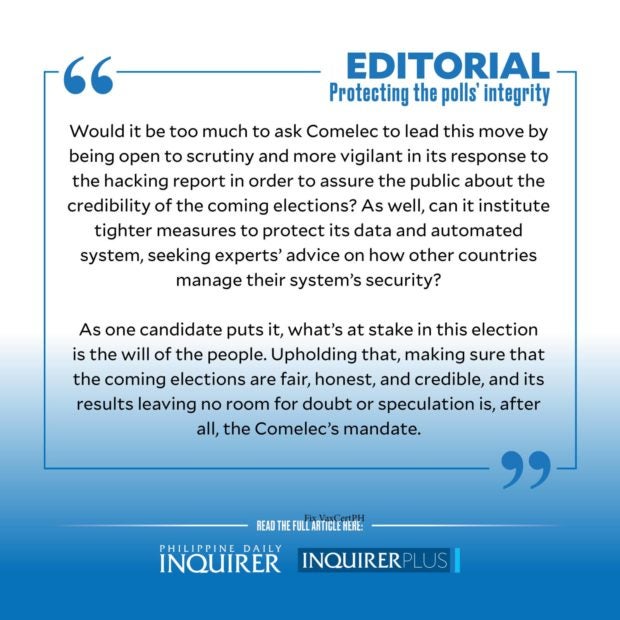 Then there’s that House resolution filed Jan. 7 by Pampanga Rep. Aurelio Gonzales Jr., of the same Cusi wing, asking Congress to convene as a constituent assembly to amend the Constitution and extend the President’s term to five years with one reelection, instead of the current six year-term with no reelection. Such blatant moves by Mr. Duterte’s allies to extend his term and those of other incumbent officials have fanned the No-El rumors as well.

It does not help that amid these contentious issues, three Comelec officials—including the chair—are retiring next month ahead of the crucial elections. Abas and commissioners Rowena Guanzon and Antonio Kho Jr. are all retiring on Feb. 2, leaving people wary about their replacements and how their loyalty and fealty to their job could be severely tested by the highly partisan character of Philippine elections. How much pressure—real or perceived—could they withstand from the appointing power? Already, election watchdogs have called for a transparent process of selecting the three new commissioners, with Kontra Daya and 1Sambayan expressing concern about Mr. Duterte having “full control” over an election body whose commissioners are all his appointees.

All these developments require a public vigilance that should take its cue from the Comelec. In a “unity statement,” the Participate PH coalition called for a more active role among the voting public in the selection of new Comelec commissioners to “ensure that the next officials are committed to maintaining the political independence of the electoral body and ensuring the integrity of our elections.”

Would it be too much to ask Comelec to lead this move by being open to scrutiny and more vigilant in its response to the hacking report in order to assure the public about the credibility of the coming elections? As well, can it institute tighter measures to protect its data and automated system, seeking experts’ advice on how other countries manage their system’s security?

As one candidate puts it, what’s at stake in this election is the will of the people. Upholding that, making sure that the coming elections are fair, honest, and credible, and its results leaving no room for doubt or speculation is, after all, the Comelec’s mandate.