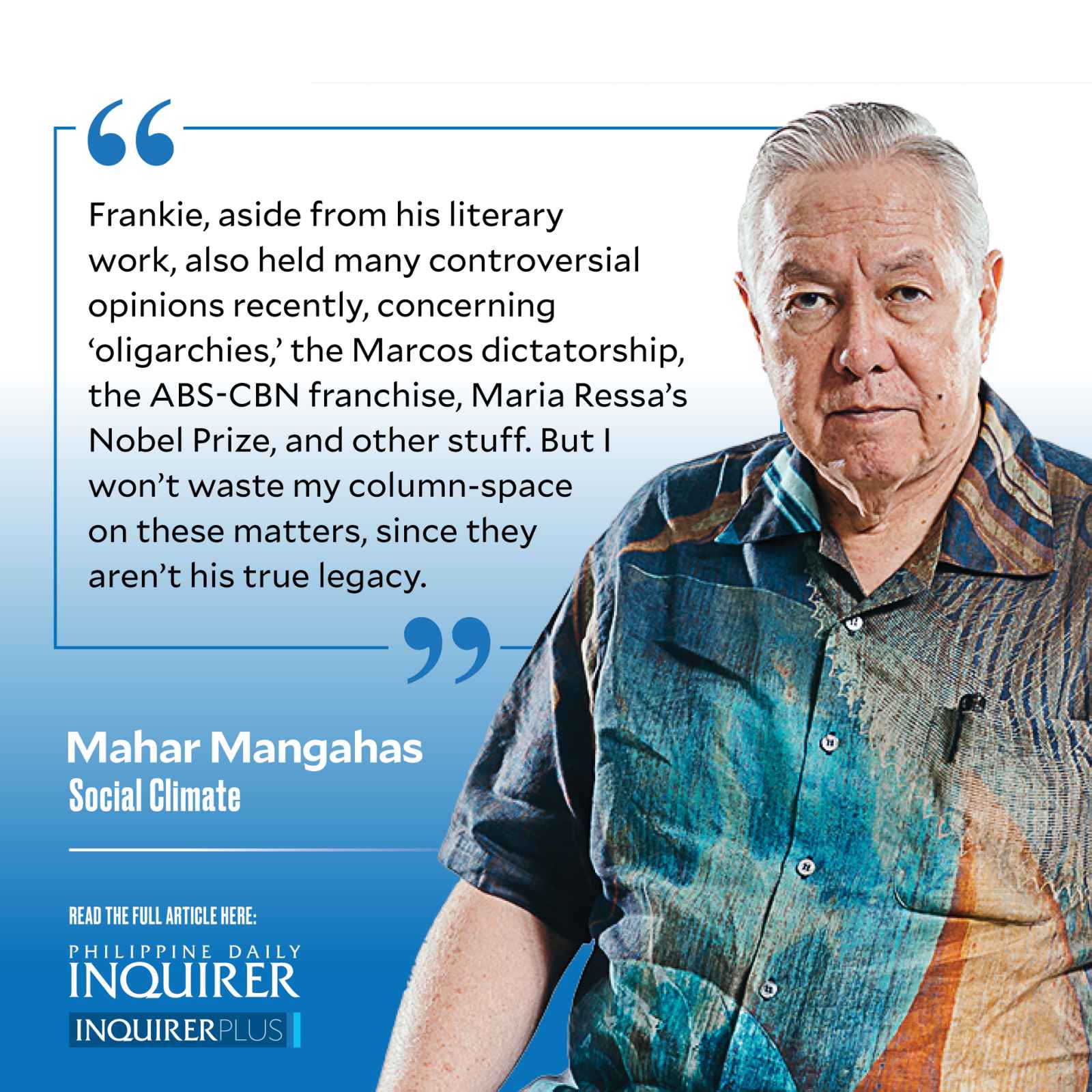 Since we’ve already been on first-name basis for a long time, I know you won’t object if I stick to it. I first met you at your bookshop Solidaridad, with my father, Federico Mangahas the essayist, your earlier friend. The age gap between Fred Mangahas and you was the same as that between you and me.

Of your many types of writings, Frankie, I think you’ll be remembered and appreciated most for your novels. Stories are what people enjoy reading; and you wrote so much. Your general themes of social justice and national pride make for good reads, and even re-reads; they are timeless.

Filipinos’ Number 1 source of national pride is our history; the Number 2 source is our achievements in arts and culture. Your fiction, Frankie, overlaps the two top sources of Filipino pride. Fiction doesn’t have to be factual; it just has to be authentic.

Frankie wrote his stories in English, which practically all Filipinos understand. It’s a unifying language for us Filipinos. SWS has surveys of what proportions of Filipinos understand English, speak it, write in it, and think in it. The first one SWS did was sponsored by Bro. Andrew B. Gonzalez, FSC, as president of the Linguistics Society; we repeated it for the American Chamber of Commerce a few years later (which discovered that our usage of English had declined).

Rizal’s most important written legacies were his novels, written in Spanish, not in any single Philippine language, so as to maximize their reach among the Filipino people of his generation. Yet he was so talented that he easily picked up local languages wherever he went, and could have made any local translation himself if his life had been long enough.

What hasn’t been surveyed, to my knowledge, is how many Tagalogs, Cebuanos, Ilocanos, Bicolanos, Ilonggos, and so forth, can understand each other’s languages? (These are languages, mind you, not mere dialects; they are mutually unintelligible.) Those are the minimum five languages in which SWS does a national survey; there can be more than five, depending on the locations drawn for a survey project. And what about the other language-groups?

There is Philippine English, just as there is British English (the official language of the International Social Survey Program), American English, Australian English, Indian English, Malaysian English, Singaporean English, and other Englishes. They are whatever the various peoples actually use in their parts of the world. These Englishes are mutually intelligible, but not identical. Filipinos would surely understand Frankie’s English better than other peoples of the world would.

For historical reasons, Frankie’s stories don’t need translation into the local Philippine languages. Neither do the stories of Nick Joaquin, and any stories written in English by Filipinos, Filipino-Americans and Filipino-whatevers living overseas. What we Filipinos could use are more English versions of great works like Lope K. Santos’ “Banaag at Sikat” (recently translated by Danton Remoto). And there should be more of the great non-Tagalog literature.

Frankie, aside from his literary work, also held many controversial opinions recently, concerning “oligarchies,” the Marcos dictatorship, the ABS-CBN franchise, Maria Ressa’s Nobel Prize, and other stuff. But I won’t waste my column-space on these matters, since they aren’t his true legacy.

Everyone knows that, when Mark Antony said of Julius Caesar: “The evil that men do lives after them; the good is oft interred with their bones,” what he meant was the opposite.

Read Next
The great COVID-19 coverup
EDITORS' PICK
Gear up and get ready to play with Yamaha Mio Gear
PH to import 60,000 tons of fish to cover shortage
Workers are exempted from ‘no vax, no ride’ policy – DOLE chief
#VotePH2022: COVID, power woes loom as poll concerns
Over 3 Million worth of prizes to be won at Smart Padala’s SENDali Manalo Promo!
Acer starts the year off strong with the Aspire Vero National Geographic Edition
MOST READ
Guevarra to Acosta: Obey rules on unvaccinated
Emma Stone calls Andrew Garfield a ‘jerk’ after he ‘lied’ about his ‘Spider-Man: No Way Home’ appearance
Cold-case investigation names surprise suspect in Anne Frank’s betrayal
Czech anti-vax singer dies after deliberate infection
Don't miss out on the latest news and information.