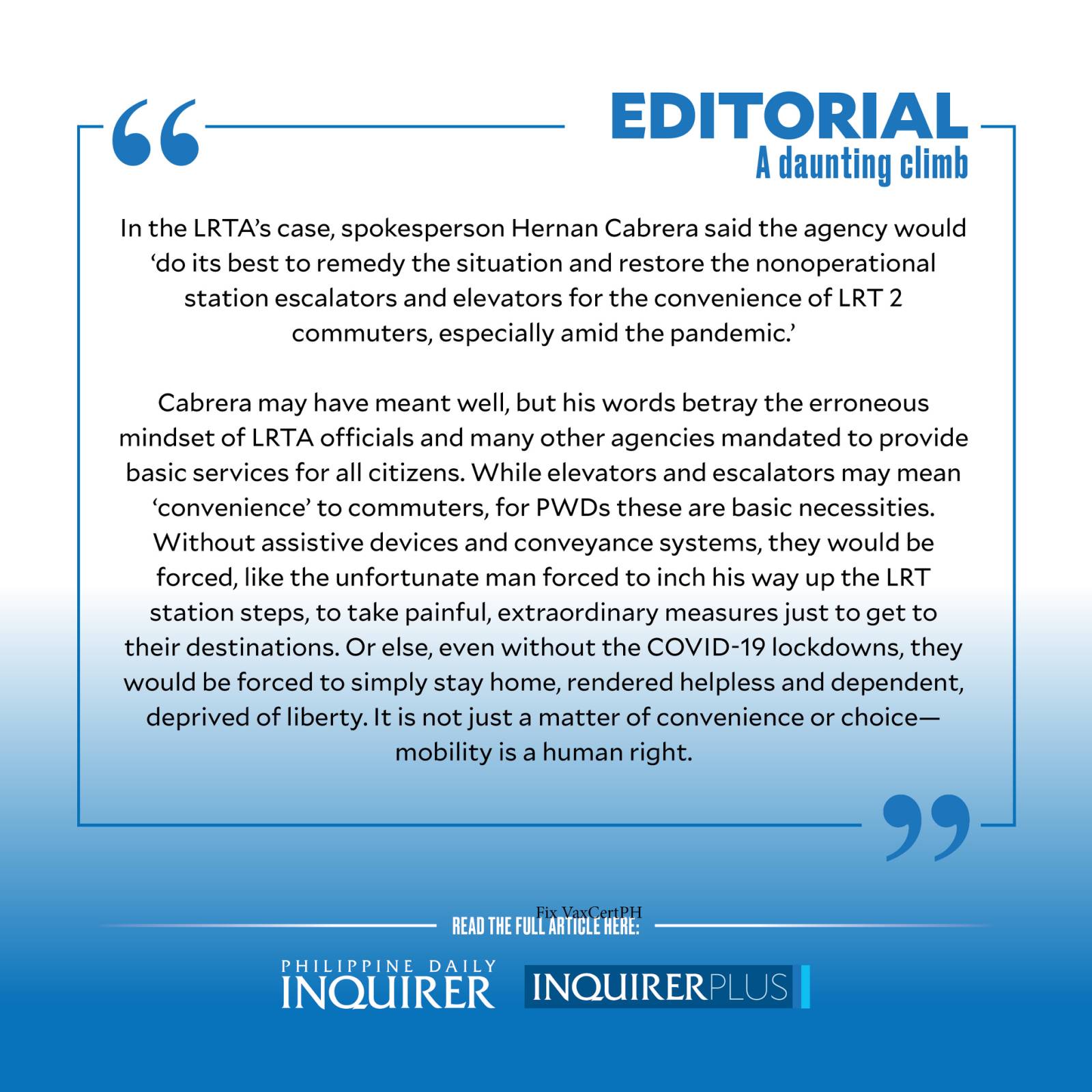 A person with disability confronts a flight of stairs leading out of a subway station. Around her, commuters are rushing about, clambering up the steps to get to their destinations.

Painfully, slowly, the old woman takes it one step at a time, clinging to the railings and trying not to fall. The sight inspires an advertising creative to come up with an idea for a campaign advocating greater accessibility for people living with disabilities.

“For you, this is just a flight of stairs,” the slogan goes, “but for PWDs this is like climbing Mount Everest.”

The steps are covered with tarpaulin that depicts the final steps in the climb to the world’s tallest mountain, with a profile of Everest looming above the exit.

This is actually a segment in a Korean TV drama, but the scene was brought back recently by a real-life scenario in the Light Rail Transit Authority (LRTA) Line 2 station on Recto Avenue in Manila.

A newspaper and Facebook posts carried the photo of a PWD awkwardly and with great difficulty ascending the stairs of the station while a security guard and a train marshal carried his wheelchair. It was later explained that they were driven to carry out this dire scenario because the escalators and elevators in the station were out-of-order.

Earlier, it was revealed that the “conveyance systems” procured by the LRTA were the subject of an investigation because it was part of an “anomalous” P170.3-million contract. Five agency officials and two contractors have been included in the charges filed in December 2021, with the agency pledging to look into the contract and the circumstances that led to their being essentially useless.

Around the world, elevators and escalators are included in construction plans of transport hubs to make it possible for PWDs—along with pregnant women, women carrying very young children, or passengers burdened with heavy packages—to use public transport.

In the LRTA’s case, spokesperson Hernan Cabrera said the agency would “do its best to remedy the situation and restore the nonoperational station escalators and elevators for the convenience of LRT 2 commuters, especially amid the pandemic.”

Cabrera may have meant well, but his words betray the erroneous mindset of LRTA officials and many other agencies mandated to provide basic services for all citizens. While elevators and escalators may mean “convenience” to commuters, for PWDs these are basic necessities. Without assistive devices and conveyance systems, they would be forced, like the unfortunate man forced to inch his way up the LRT station steps, to take painful, extraordinary measures just to get to their destinations. Or else, even without the COVID-19 lockdowns, they would be forced to simply stay home, rendered helpless and dependent, deprived of liberty. It is not just a matter of convenience or choice—mobility is a human right.

This is precisely the point raised by the Commission on Human Rights (CHR) when it reminded the government to uphold the right of PWDs to accessible transportation. Enabling PWDs to use public transport is “crucial in ensuring equal opportunity and access to basic services for this vulnerable sector,” added the CHR.

The last time a formal census of the community of PWDs was conducted was in 2010, though a 2017 study by the Philippine Institute for Development Studies found that of 1,031 adult women and 823 children surveyed, majority were found to be “mobility impaired.”

Thus, the CHR said it was urging the administration of the LRT and MRT to “ensure that all facilities, which cater to the specific needs of PWDs, are properly working. The government should also do the same for all buildings and facilities—public or private.”

In its 2020 report on human rights practices in different countries, the US state department observed that in the Philippines, a “great majority of public buildings remained inaccessible to persons with physical disabilities.” Ignoring and neglecting the needs of PWDs is indeed a violation of their human rights.

The photo at the LRT 2 station and the statements of officials drew a bevy of reactions, mainly negative, from the online community.

One social media user pointed out that in other stations, PWDs are often crowded out of elevators and escalators by able passengers who relish the “convenience” these provide.

Indeed, there is more to the “Everest” of public transport than just defective machinery (and graft-ridden procedures behind them).

There is also the indifference of the general public, who cannot imagine themselves someday having to overcome their own “Everests” and living the difficult life of a PWD.

Read Next
Who’s got solid plans for PH?
EDITORS' PICK
Gear up and get ready to play with Yamaha Mio Gear
PH to import 60,000 tons of fish to cover shortage
Workers are exempted from ‘no vax, no ride’ policy – DOLE chief
#VotePH2022: COVID, power woes loom as poll concerns
Over 3 Million worth of prizes to be won at Smart Padala’s SENDali Manalo Promo!
Acer starts the year off strong with the Aspire Vero National Geographic Edition
MOST READ
Guevarra to Acosta: Obey rules on unvaccinated
Emma Stone calls Andrew Garfield a ‘jerk’ after he ‘lied’ about his ‘Spider-Man: No Way Home’ appearance
Cold-case investigation names surprise suspect in Anne Frank’s betrayal
Czech anti-vax singer dies after deliberate infection
Don't miss out on the latest news and information.