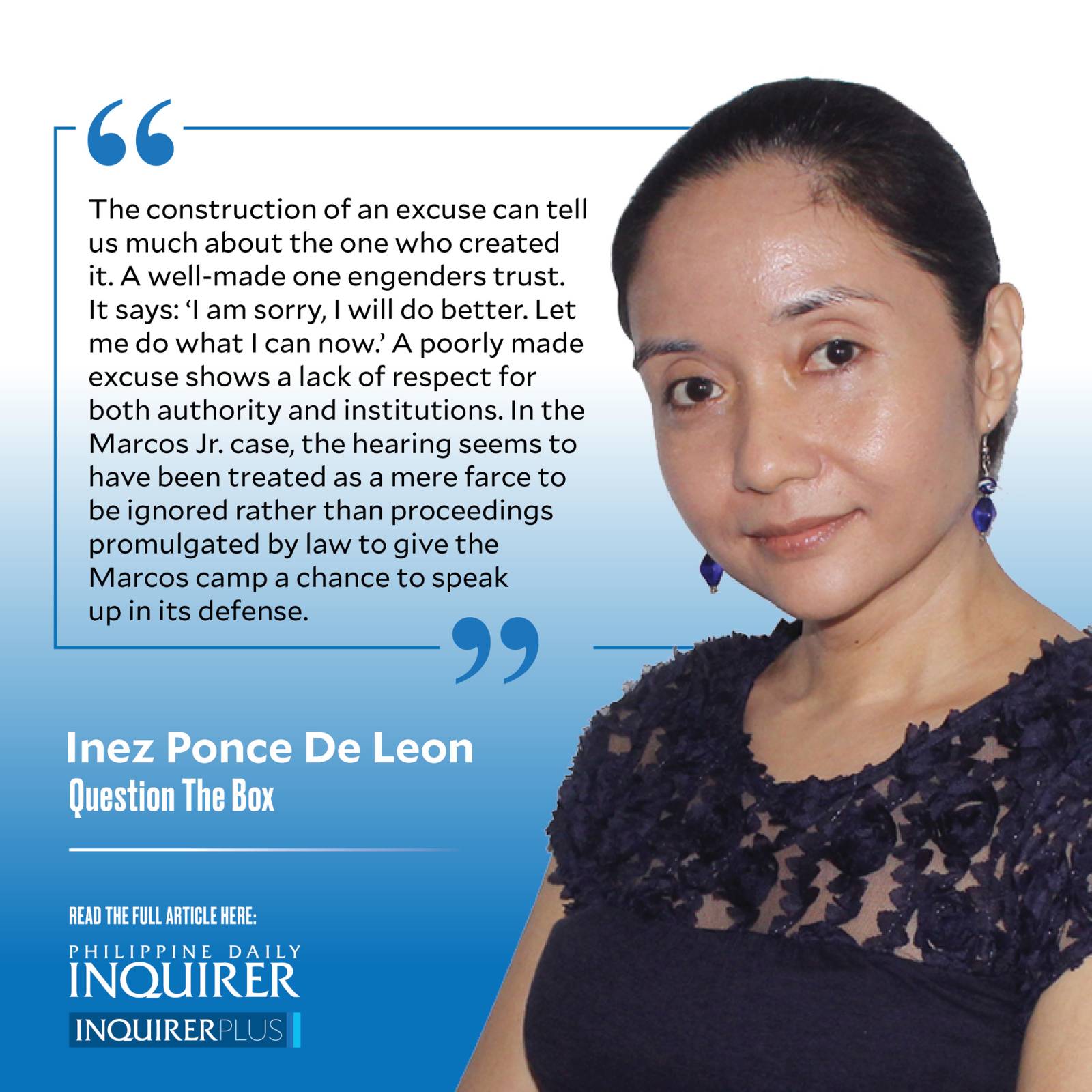 In this age of online classes, I can’t help looking back on the most memorable excuses I’ve ever received from my students.

One student emailed me from the mall, where she had been held up at knifepoint in a movie theater. She had to turn her backpack over, which contained her laptop, wallet, and notebook for our class activities (and for which she had no backup copy, save the photos she had taken on her phone, which she had fortunately kept in her back pocket).

She emailed me a copy of the scores I had written in the notebook as proof of the points she had gotten so far.

Another student took a photo of her IV drip. She had been rushed to the hospital with dengue, but she promised to send me her paper, though it would be a few hours late.

Another student came to school the day after she was held up at gunpoint in her cab. She fought against her assailants, one of whom punched her in the face. She showed off her now bent nose bridge, and asked me for an hour’s extension on her paper because she already remembered what she had typed on her stolen laptop.

My favorite is my dance student, who came to class without the official PE uniform. She showed me a series of photos on her phone: a screenshot of that morning’s weather report, which showed rain; a photo of the leaky roof that had dumped water on her PE shirt hanging on the clothesline; and her PE shirt, wet and sodden, next to a copy of that day’s newspaper.

“Are you holding your PE shirt for ransom?” I tried to be as deadpan as possible, but I wanted to burst out laughing.

“You’re so funny, ma’am!” she giggled, “I just wanted to show you that I really can’t wear the shirt. But if you want to take away points, that’s ok. I want to learn to dance today!”

I am not glorifying overworking. I just can’t help remembering how college excuse “slips” once took a wild variety of forms in a time when everyone had to commute, wash their clothes for school, or visit malls to unwind. I remember the good students who were uneasy about giving excuses, but who nevertheless made up for lost time and scores.

Sadly, the same cannot be said for the debacle that was Jan. 7, and the hearing that couldn’t happen because Ferdinand Marcos Jr. had to stay in bed. He had been exposed to and was feeling symptoms of COVID-19, his lawyers said. They took hours to produce the medical certificate, which had been signed off by an orthopedic surgeon, with no official RT-PCR test results attached.

He could simply switch on his camera to show that he was present, the Commission on Elections commissioner said. Oh no, he would spread COVID-19, the lawyers replied. And so, a new strain of virus was born.

He was on radio shows the day before, so why didn’t he show up for the hearing, the online world asked? Oh, the lawyers countered, his multiple interviews exacerbated his symptoms.

This looks like a story being made up as the lawyers go along, as they counter each question with excuse piled upon excuse. What a contrast to my college students, who were focused on getting a good job done, who took responsibility and were willing to accept the consequences of their actions.

The construction of an excuse can tell us much about the one who created it. A well-made one engenders trust. It says: “I am sorry, I will do better. Let me do what I can now.”

A poorly made excuse shows a lack of respect for both authority and institutions. In the Marcos Jr. case, the hearing seems to have been treated as a mere farce to be ignored rather than proceedings promulgated by law to give the Marcos camp a chance to speak up in its defense. Marcos Jr.’s unwillingness to turn up for his own hearing shows a lack of independent thinking—and a lack of vision. What, exactly, are his goals? Or shall we wait for excuses for those as well?

I extended consideration to my students, whose circumstances were truly beyond their control. I would likewise extend consideration and even honor to the delivery riders who ply the metro on an empty stomach, the nurses who report to work even with the deepest of fatigue, the doctors who do online consultations even when they are showing symptoms of COVID-19 themselves.

That same consideration, however, cannot be extended to a candidate for the presidency who hides behind the excuses that others have to make on his behalf.