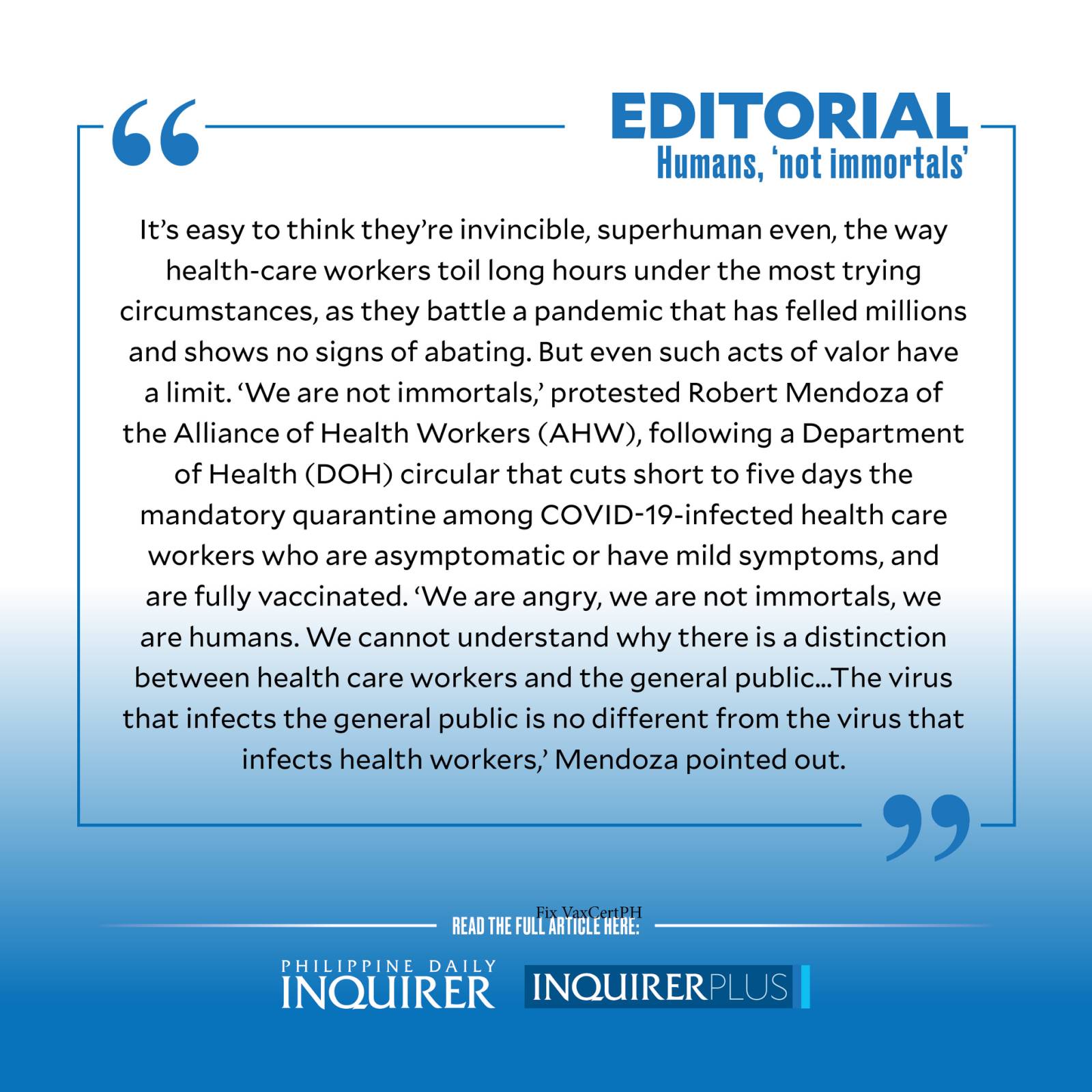 It’s easy to think they’re invincible, superhuman even, the way health care workers toil long hours under the most trying circumstances, as they battle a pandemic that has felled millions and shows no signs of abating. But even such acts of valor have a limit.

“We are not immortals,” protested Robert Mendoza of the Alliance of Health Workers (AHW), following a Department of Health (DOH) circular that cuts short to five days the mandatory quarantine among COVID-19-infected health care workers who are asymptomatic or have mild symptoms, and are fully vaccinated.

The directive, the DOH said, was meant to ensure that there would be enough health care personnel to keep hospitals running amid the recent spike in the number of COVID-19 cases. On Monday, the DOH reported a record high of 33,169 additional infections in the country, with at least 900 health care workers at the Philippine General Hospital contracting the virus as of Wednesday and severely affecting the bed capacity of the government’s premier hospital.

But, according to the AHW, the move was “illogical and unscientific,” and would pose more health risks to health workers and patients, while accelerating the spread of infection. Eleonor Nolasco of the Filipino Nurses United (FNU) said the new policy “put(s) nurses and other health workers on a suicidal mission.”

In separate statements, FNU and AHW said the measure only shows the government’s lack of care for front liners who have been “shouldering the burden brought about by the criminal neglect and failure of the DOH and this government” in handling the pandemic. But then again, should we be surprised? Previous incidents have shown how little concern government has accorded health workers despite their heroic frontline role.

Recall how, in August 2020, medical frontliners called for a two-week timeout to recover their strength and morale as they witnessed scores of their colleagues succumb to the dreaded virus. Instead of support, President Duterte scolded doctors for allegedly fomenting a revolution.

Recall as well the stigma and discrimination that health workers suffered in the early days of the pandemic, with some of them evicted from their rented space for fear that they would be carriers of the dreaded virus. Meanwhile, as the infection started filling up hospitals, health workers had to make do with improvised personal protective equipment fashioned out of garbage bags for lack of ample supply from the government.

Then there’s that September 2021 incident that had then presidential spokesperson Harry Roque verbally assaulting a ranking official of the Philippine College of Physicians for airing her appeal against relaxing restrictions amid the rise of cases due to the Delta variant.

Consider, too, the meager wages that have driven our nurses to foreign shores. The special risk allowance (SRA) promised them is illustrative. Long delayed, the grand sum turned out to be a pittance, with one doctor taking to social media to post her SRA for six months which amounted to P2,045.45.

While the shortened quarantine would now apply to the general public as well, the subtext in the DOH circular rankles still: Why are health care workers first in line when added hands are needed, but last when it comes to benefits and compensation? How much of President Duterte’s promise of a P50-billion SRA in the 2022 budget would health workers actually get?

The shortage of health workers had been a problem for years before the pandemic, and has become more pronounced now. Instead of the risky shortcuts in health protocols, how about finally implementing a mass hiring of regular health workers with a “living wage” to make them stay and sustain the health care capacity of hospitals? How about asking other government agencies or local government units to lend their medical personnel to affected hospitals so infected health care workers can get the rest and recuperation they need and deserve? And most of all, how about ensuring that those who are forced to man the frontlines be given all the support and protection they need to survive?

As it is, the new directive indicates that the DOH has not learned from its costly neglect of health workers in previous years, and that its own statement might hold true for itself—that 2022 might well be 2020, too.