An uncertain world, too 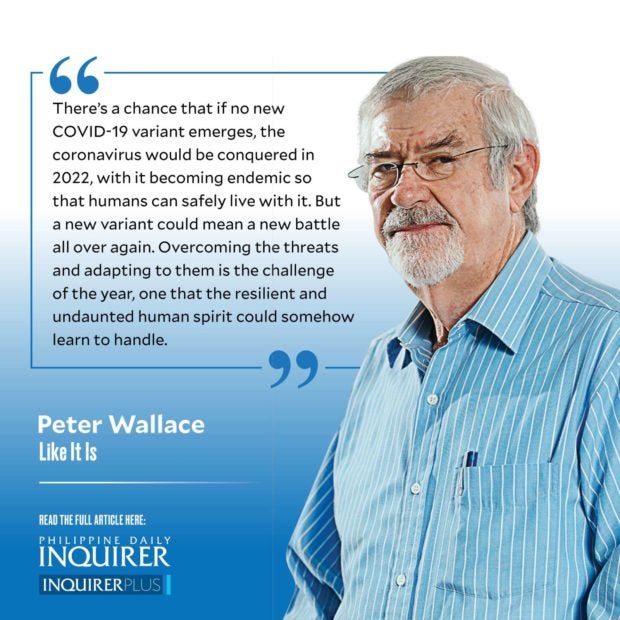 As I mentioned in my column last week, this is going to be an uncertain year. On the bright side, governments seem to be learning how to react more swiftly to the changes brought about by the pandemic, including the disruptions in the economy. Particularly in the West, some sectors have not made the adjustment easier with their irrational reactions.

Everyone likes to be optimistic as a new year begins, and there may be cause for that. At least here at home, despite the uncertainties over who the next president might be and what that might mean for us, all the fundamentals underpinning our society are sound (no fears of a similar Trump insurrection here).

But uncertainy remains high worldwide. There’s the standoff between the United States and China over trade and human rights, amplified by the latter’s possible incursion into Taiwan that it claims is part of its territory. The US also faces off with Russia over security issues, but now there’s the added threat of Russia invading Ukraine. There are other causes for concern: the possible escalation of conflict in the Middle East, exacerbated by the risk of Iran going nuclear, and the unpredictable military actions by North Korea.

While China’s military takeover of Taiwan is not expected this year, it can’t be ruled out. Cyberattacks and the territorial grab of Taiwan’s outlying islands (as China did to us in the West Philippine Sea) are a disconcerting possibility. As Xi Jinping becomes ever more confident and assertive, I see the collapse of Hong Kong as a democracy with the loss of its judicial independence, and—not too far into the future—its cachet as an international financial center. Putin’s invasion of Ukraine would meanwhile depend on how successful US President Joe Biden and the European Union are in tempering his obsession with power.

The growing collaboration between Putin and Xi is worrying, with the possibility of chaos should they make good their threats. Existing regional wars however seem unlikely to escalate beyond the respective borders of the countries involved.

Democracy is under threat, led by the vicious attack on the US Capitol last year by disgruntled Donald Trump supporters, egged on by the former president himself. Trump single-handedly destroyed America’s standing in the world and would, horrifyingly, leave its political and economic gains in ruins should he run again and win in 2024. Already, he is threatening a civil war if he loses in the polls again. The seriousness of his threat to America’s democracy cannot be overstated, just as 73 countries around the world struggle against the erosion of their democratic ideals in the past year, according to Freedom in the World 2021 Index. Though Trump’s rhetoric and alternative facts have done their part in undermining American institutions, the COVID-19 pandemic has given potential autocrats the excuse they need to crack down on critics exercising their right to raise questions. The mishandling of the global health crisis has also eaten away at public trust of government, making it difficult for world leaders to take a tough stance on what needs to be done.

Inflation is soaring, a result in part of problems in the supply chain that has led to product shortages. It’s a speed bump that can be easily handled as we move through the year.

It is giving us freedom in the way we live that was unimaginable a few years ago. The virtual world is intermingling with the physical, and expanding the ease with which we do everything from business to leisure. But it has also allowed easy access to fake news, as well as facilitated the spread of false, distorted, and deceptive information, coupled with increasing sophistication in attacking one’s person and stealing personal data. We’ve made some, but not enough, progress in reducing the toxic gases that are threatening to broil our planet and wreak havoc on the climate with international meetings such as COP26 (Climate Change Conference). But much more needs to be done to slow down global warming and deal with politicians who are more concerned about their survival than with humanity’s (check out that Netflix movie, “Don’t Look Up”). Critical to this goal is Xi Jinping and his ability and willingness to rein in China, the world’s biggest contributor—at 27 percent in 2019—to global warming.

What really stood out last year was the miraculous coming together of the pharmaceutical industry to develop vaccines in record time, and manufacture them in sufficient doses to control a rapidly mutating virus. There’s a chance that if no new COVID-19 variant emerges, the coronavirus would be conquered in 2022, with it becoming endemic so that humans can safely live with it. But a new variant could mean a new battle all over again.

Overcoming the threats and adapting to them is the challenge of the year, one that the resilient and undaunted human spirit could somehow learn to handle.

TAGS: 2022 developments, Like It Is, Peter Wallace, world politics