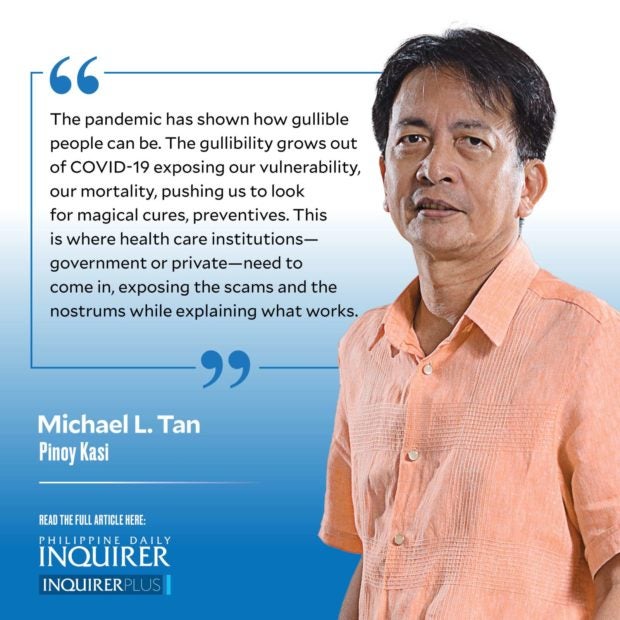 You’d think that two years into the pandemic we’re smarter now than the virus but … Read on.

A friend of mine who is on a work-from-home arrangement had to visit her office last week to retrieve some documents. At the reception, someone was assigned to escort her to the elevator.

Imagine my friend’s surprise when the “escort” entered the elevator too.

Imagine her even greater surprise — this will sound like a horror movie — when the unsmiling escort suddenly took out a small gadget, which looks like a gun, aimed it at my friend and then activated it, sending out a fine liquid stream from head to toe, accompanied by a blue light, complete with sound effects.

My friend had no time to react but found out it was standard “disinfection” procedure prescribed by the bosses.

My friend was sharing her story at a Zoom meeting, which made me jump from my seat to grab a gadget to show on the camera, asking: “Did it look like this?” and my friend said, yes yes, that was it. I turned on the gadget and everyone in the meeting laughed as they realized what it must have been like, trapped in an elevator and being assaulted by some extraterrestrial.

When I asked my friend what the liquid was, she said she never found out. I probed further, asking if it smelled like a swimming pool. She said yes. Clearly, it was a chlorine mix, which is the subject of warnings from the World Health Organization because of its dangers when inhaled.

More on the “space gun,” which I got last year on Shopee from a vendor of garden supplies because that is what the gadget was originally formulated for. It sends out a “nano mist,” very fine particles of whatever liquid you’re using, supposedly with gentler effects on the plants and, the supplier claimed, with a blue light “disinfecting” the plant. The light is described as UV but I know for a fact that the genuine disinfecting UV lights are much more expensive, and are certainly not to be used as part of a misting machine. (The “space gun” goes for as low as P189.)

In fairness, advertisements don’t make claims against COVID-19; it seems the public has created that use, and the use of chlorine as well as alcohol.

It’s great for plants, and yes, for cleaning under the toilet rim. Cute theater prop, even a high-tech toy—it has a USB charger. But it does not prevent COVID-19.

The pandemic has shown how gullible people can be. The gullibility grows out of COVID-19 exposing our vulnerability, our mortality, pushing us to look for magical cures, preventives.

This is where health care institutions — government or private — need to come in, exposing the scams and the nostrums while explaining what works. My main gripe against these gadgets is that they might create a false sense of security. You see someone spraying away and feel secured, forgetting to check if you are wearing your mask correctly, or if there are too many people around you.

Let’s get back to basics: wearing secure masks and a combination of ventilation and physical distancing, compactly described as the 3Cs to avoid: crowds, close contact, and closed spaces.

Lately, too, governments have endorsed home testing kits with proper instructions, something I’ve been pushing for months now after my own experience using the kits and detecting cases among my staff, including drivers, who can be the most efficient spreaders of infection. The Philippine government has been too slow on this matter of home testing, even as the kits are now sold everywhere, often overpriced and without adequate information.

Finally, there’s vaccination, which has become more complicated with findings that their protection declines with time, thus the need for boosters. Moreover, not all brands offer the same protection against Omicron. The government needs to be clear on what scientific guidance they’re using for their procurements. We have to remember these vaccines are not really free; they’re being purchased with loans which we have to pay back through our taxes. What’s that Filipino expression about being fried in our own lard?

The virus isn’t getting any smarter, but we seem to be getting less smart (being polite), and stubbornly so.