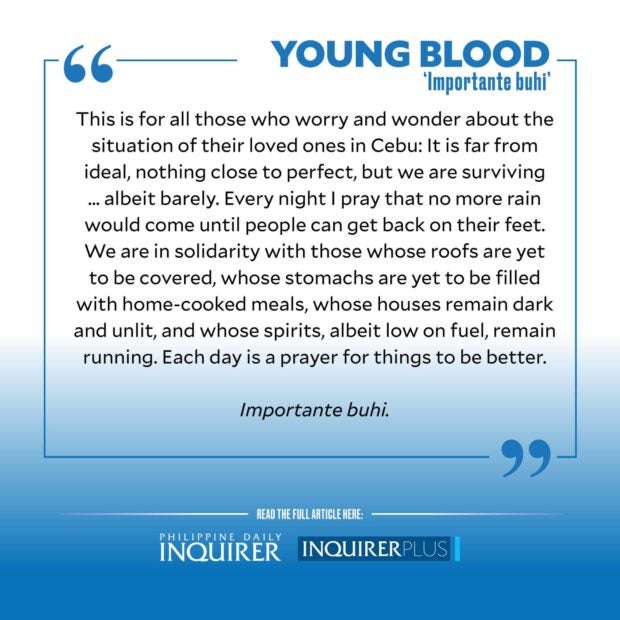 This is for all those who worry and wonder about the situation of their loved ones in Cebu: It is far from ideal, nothing close to perfect, but we are surviving … albeit barely.

On the evening of Dec. 16, from 8 p.m. to 10 p.m., when the perilous winds of Supertyphoon “Odette” struck Cebu City, I prayed so hard to my guardian angel. The resounding words that repeatedly came from my mouth had the weight of meaning I had never felt before: “Angel of God, my guardian dear, to whom God’s love commits me here. Ever this day, be at my side, to light and guide, to rule and guard, Amen.”

The prayer that used to be a simple utterance of syllables became my strongest anchor. I held on to it with all conviction that light would shine upon me and I would be guarded against the typhoon’s wrath. Perhaps this angel could save me from death.

Death, yes, was what I was thinking.

Coming from Lanao del Norte in the region of Northern Mindanao, I was used to flooding and dealing with mud, but not maximum sustained winds at 185kph and gustiness at 255kph.

I wasn’t prepared for Odette’s menacing wind. In the afternoon, at around 5 p.m., I could hear the wind blow a loud whistle, as if surveying the territory it would then shatter. The whistle didn’t end until it was Cebu’s turn for landfall. The sound of the winds on that dark night was sinister, as if a racing car was passing above your roof, going in circles over and over again, each time stronger than the previous one, taking with it whatever it could. I could feel our concrete walls shake.

I put my cats in their cages to keep them secure and warm, asking them to pray to their God, too. I had learned from news reports that should you need to evacuate and cannot bring your pets with you, leave them untied and uncaged so they could find a way to survive. But, at that time, I knew there was no chance to leave the premises as the wind blew, breaking our window panels and pushing away our heavily potted plants. I was in a nook I considered the safest on the third floor of my apartment; there were three of us left there. All others were huddled in their respective floors, too. It was a long, dark night.

I turned to my angels, and my cats’ God, asking for their protection—to help us bear the unbearable. It was the time to hold on to nothing but faith. Faith that the wind would stop becoming a threat and blow its final whistle.

Faith held me and my companions until 10 p.m. By that time, all power was out. I tiptoed my way back to my room. Glass panels were broken, debris was everywhere, but I sighed in relief. Those will be dealt with tomorrow. Sufficient for today is that we’re alive.

I uncaged my pets, and we tried to survive the night.

The day after, Dec. 17, was a bleak day. I say bleak because the sky was gray, the world was eerie, and the sound of the wind was nothing. It was the same calm that occurred before Odette wrecked people’s lives, limbs, and property. Homeowners started to clear their properties, salvaging whatever they could.

After securing my room, I went to check the museum, my workplace. On my way there, I had to ride a motorcycle as no public transportation was available. ATM lines were long and crooked, water refilling stations seemed to be an endless source of people, same with the gasoline stations. People were hoping to get a decent signal to inform those who worried about them that they are alive. Importante buhi—albeit barely (what’s important is you’re alive). Such Cebuano spirit.

Electrical poles were down, uprooted trees were blocking the road, traffic lights were non-existent—all worsening the already dreadful situation.

Two weeks after the devastation, Cebu City was still experiencing power blackouts and water shortage. People would line up in water stations, and private companies and organizations have held their own charity drives to provide what they could. The situation has been a work in progress.

For lack of a better term, Cebu City is “lucky” to have intermittent mobile data and network signal. In other provinces that were also hit like the Dinagat Islands, there has been no signal at all. How can people reach out for help? How can the survivors inform their families how they are doing? What people need are sources of power so they can have proper connectivity. Heck, even “improper” connectivity would do, just to enable them to reach out to the world.

I am back at home in Kapatagan as I write this, and every night I pray that no more rain would come until people can get back on their feet. We are in solidarity with those whose roofs are yet to be covered, whose stomachs are yet to be filled with home-cooked meals, whose houses remain dark and unlit, and whose spirits, albeit low on fuel, remain running.

Each day is a prayer for things to be better.

Chanda Pearl B. Simeon, 28, is a law student and deputy executive director of the Sugbu Chinese Heritage Museum Foundation Inc. in Cebu.