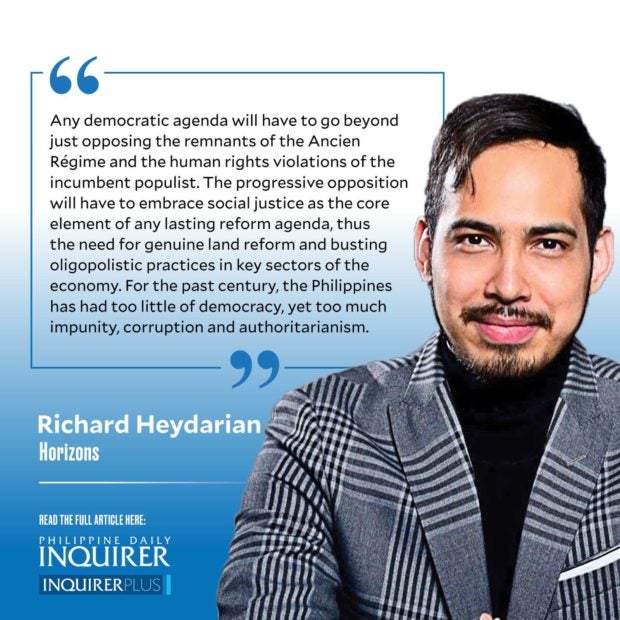 During an oft-cited speech before the Philippine Business Conference in 1992, the late Singaporean leader Lee Kuan Yew declared, “I believe that what a country needs to develop is discipline more than democracy.”

Over the next three decades, that quote has been widely shared, tweaked, and misrepresented by a whole coterie of authoritarian populists, revisionists, and their well-funded minions. Based on the conventional misunderstanding of Lee’s statement, the Philippines supposedly has “too much democracy,” thus the need for an authoritarian leader.

But Lee’s statements were a response to the US’ criticisms of his human rights record within the broader context of the “Asian Values” debate in the 1990s. Moreover, what’s often omitted in this false narrative are the Singaporean leader’s reflections on the depth of corruption and abuse of power under the Marcos dictatorship. According to Lee, the late Filipino dictator was “a self-indulgent ageing ruler,” who, together with his family and cronies, “pillaged his country for over 20 years.”

In short, what Lee had in mind was not a strongman regime per se, but instead a disciplined leadership, which is dedicated to the development of a strong and prosperous republic. But from both the martial law years all the way to the twilight moments of the post-Edsa regime in recent years, the Filipino people have suffered under a whole series of inept, self-indulgent and, at times, brutal presidents, who mainly placed personal and partisan interests above that of the nation.

In fact, one of the biggest problems in our public discourse is the lack of proper understanding of the concepts of “democracy” and “discipline.” Contrary to Lee’s claims, the two are actually interrelated and mutually constitutive. This is why some of the world’s freest nations, from Sweden to South Korea and Germany, are also among the most prosperous and just ones.

And this is precisely where presidential candidate Leni Robredo comes in. Her campaign and, should she be successful, prospective presidency will have to bring about a robust democracy that exudes discipline and dedication at the highest echelons of power.

From Edmund Burke to John Locke, a whole host of modern thinkers have emphasized the need for “ordered liberty,” namely the need for securing and preserving basic freedoms based on the rule of law. And this is where traditional reformism is woefully insufficient in the Philippines.

To be fair, both Presidents Fidel Ramos and Benigno Aquino III oversaw broadly successful reforms, which staunched the gushing wound in our fragile institutions. One ended the coups and socio-economic chaos of the 1980s, while the other reversed the corruption and maleficence of the 2000s.

Unfortunately, both presidents were succeeded by authoritarian populists, who seamlessly reversed “good governance” gains of their reformist predecessors. After all, liberal reformism mainly addressed primary and urgent challenges sans structural transformation of our democratic institutions.

This is why Leni’s campaign can’t be just another iteration of traditional reformism, which provided mostly fragile and transient gains in the broader scheme of things. To win back the majority of voters and rejuvenate our democratic institutions, the progressive opposition will need a new and reenergized agenda, which contains the three following elements.

First of all, there has to be greater emphasis on institutional reform and institution-building, even if this means amending sub-optimal parts of our Constitution. The past four decades have demonstrated the country’s inability to rehabilitate broken institutions that were inherited from the Marcos dictatorship, which severely undermined a once-promising Asian democracy.

Second, what the Philippines needs is not only a good president or two, but a whole progressive movement, which would mainstream good governance reforms and facilitate the implementation of tough yet indispensable structural reforms, including an end to judicial impunity and a cap on the proliferation of political dynasties across all levels of governance.

Finally, any democratic agenda will have to go beyond just opposing the remnants of the Ancien Régime and the human rights violations of the incumbent populist. The progressive opposition will have to embrace social justice as the core element of any lasting reform agenda, thus the need for genuine land reform and busting oligopolistic practices in key sectors of the economy. For the past century, the Philippines has had too little of democracy, yet too much impunity, corruption, and authoritarianism.