The myth of the ‘soft woman’ 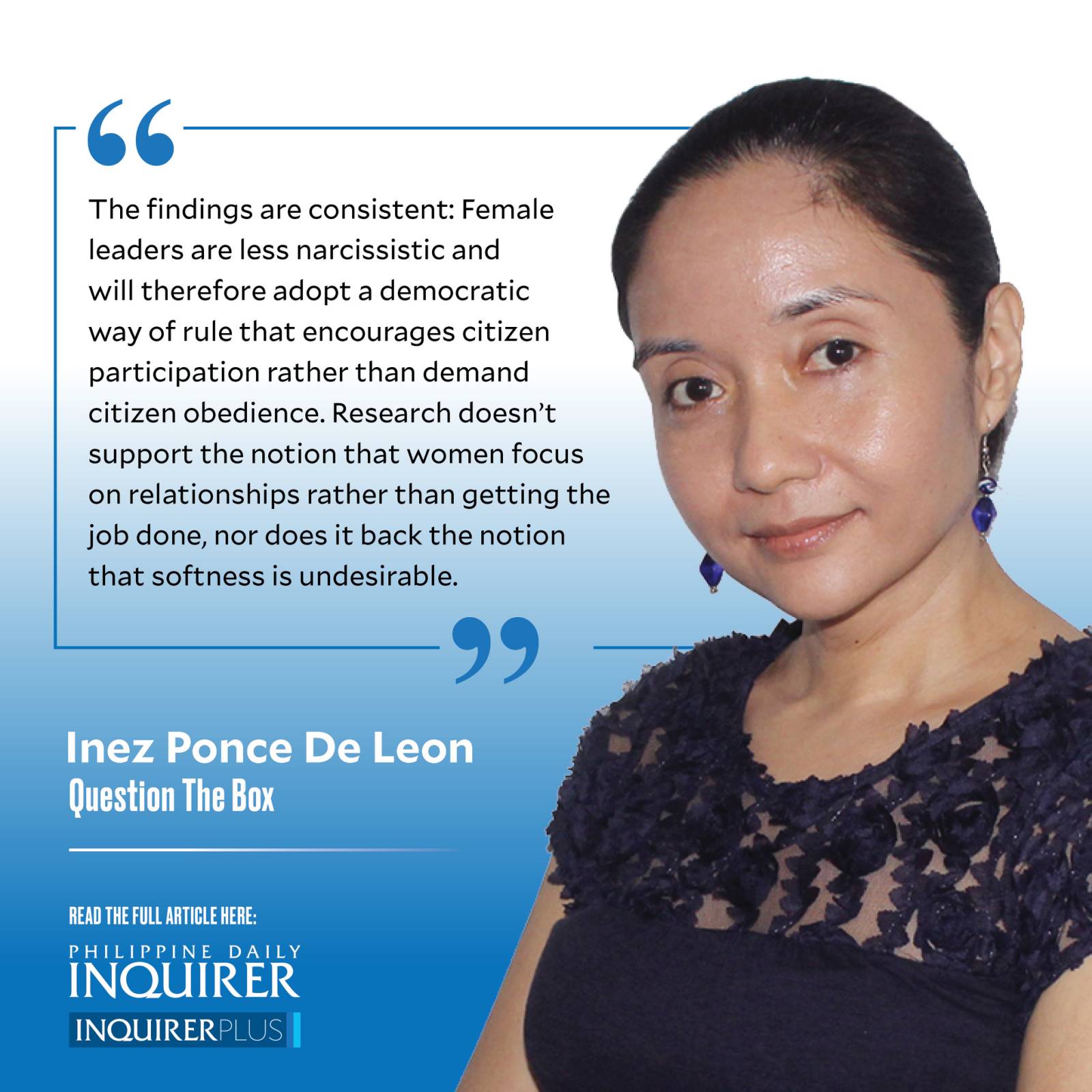 A few days before Christmas, I was on the road, courtesy of a ride-hailing app. My driver struck up a conversation that turned eventually to who we’d vote for in 2022. I said I’d vote for Leni Robredo. He agreed, but with a long, slow drawl that sounded uneasy.

My brain kicked into research mode. “Why do you say, ‘But she’s a woman’?” I asked.

“Why is that wrong?”

“Because the president of a country has to be strong and noble, right?”

“Why do you think this is important?”

“So: are you voting for yourself or for the country?”

A beat. Silence. Then, “Oh, ma’am, did you see what the Department of Health did last week?”

Our conversation turned to other things (we talked the entire ride), and he never brought up the idea of “women can’t be leaders” again.

His view is neither isolated nor uncommon. The “women are too soft” argument runs rampant both online and offline. A cursory look at Facebook comments sections reveals statements as brief as “women are weak” and entire treatises on how female leaders might become puppets of the powerful and wicked.

But where do all these ideas come from? Certainly not from research. There is a wide body of knowledge that examines leadership styles between the sexes (Grijalva, Eagly, and their respective colleagues, for instance, studied and published their work on the leadership styles of males vs. females). The findings are consistent: Female leaders are less narcissistic and will therefore adopt a democratic way of rule that encourages citizen participation rather than demand citizen obedience. Research doesn’t support the notion that women focus on relationships rather than getting the job done, nor does it back the notion that softness is undesirable.

Both Forbes and the Harvard Business Review agree. The “strong” leader is not the man who stands alone and makes decisions, but the servant leader who generates ideas through collaboration, motivates through inspiration, and empathizes rather than commands—all traits embodied by women leaders.

So why are there so few women in leadership positions? The Harvard Business Review traces it to the infrastructure: There are many opportunities for competent women, but there are no sanctions on incompetent males, hence the surplus of male leaders who tend to be unethical and overconfident in their abilities. Forbes is more incisive: People in charge of voting those into power do not select leaders based on talent or merit, but swagger and confidence. People tend to vote on style, not substance; they end up choosing leaders who exude an atmosphere of strength, but have little to show for it.

It was this focus on style that emerged when I spoke with the driver. I used a research method called laddering: We ask a person “why” three times, which helps us as researchers to get to their core values, but which also helps the person confront their own loopholes in reasoning. Like many voters, the driver valued ideology and bravado, but not merit, ability, or accomplishment.

I remembered the conversation with the driver as I read Pope Francis’ homily on Jan. 1, the Feast of Mary Mother of God. The Pope extolled Mary as a woman who accepted pain and humiliation, which led to her “more mature faith.” He spoke of Mary as a mother who “keeps and ponders”: she holds things in her heart, and ponders them in the silence and peace of her soul. As a mother, she brings together all the “hidden threads” that connect her experiences, looks at the world so that it can be given life, sees reality with the eyes of her heart.

Pope Francis went on to talk about all mothers, and encouraged us to protect women. Enough of the violence against women, he said: “To hurt a woman is to insult God.”

We often think of “hurt” as physical, but sexism and misogyny are their own forms of abuse. The humiliation online, the belittling, the dismissal, the ridicule—none of these are ever harmless. To continue to engage in such conversations, as Pope Francis might say, is to contradict the teachings of the Mother Church. To make major decisions based on baseless preconceptions is a disservice to the country—a slap in the face of the Motherland.