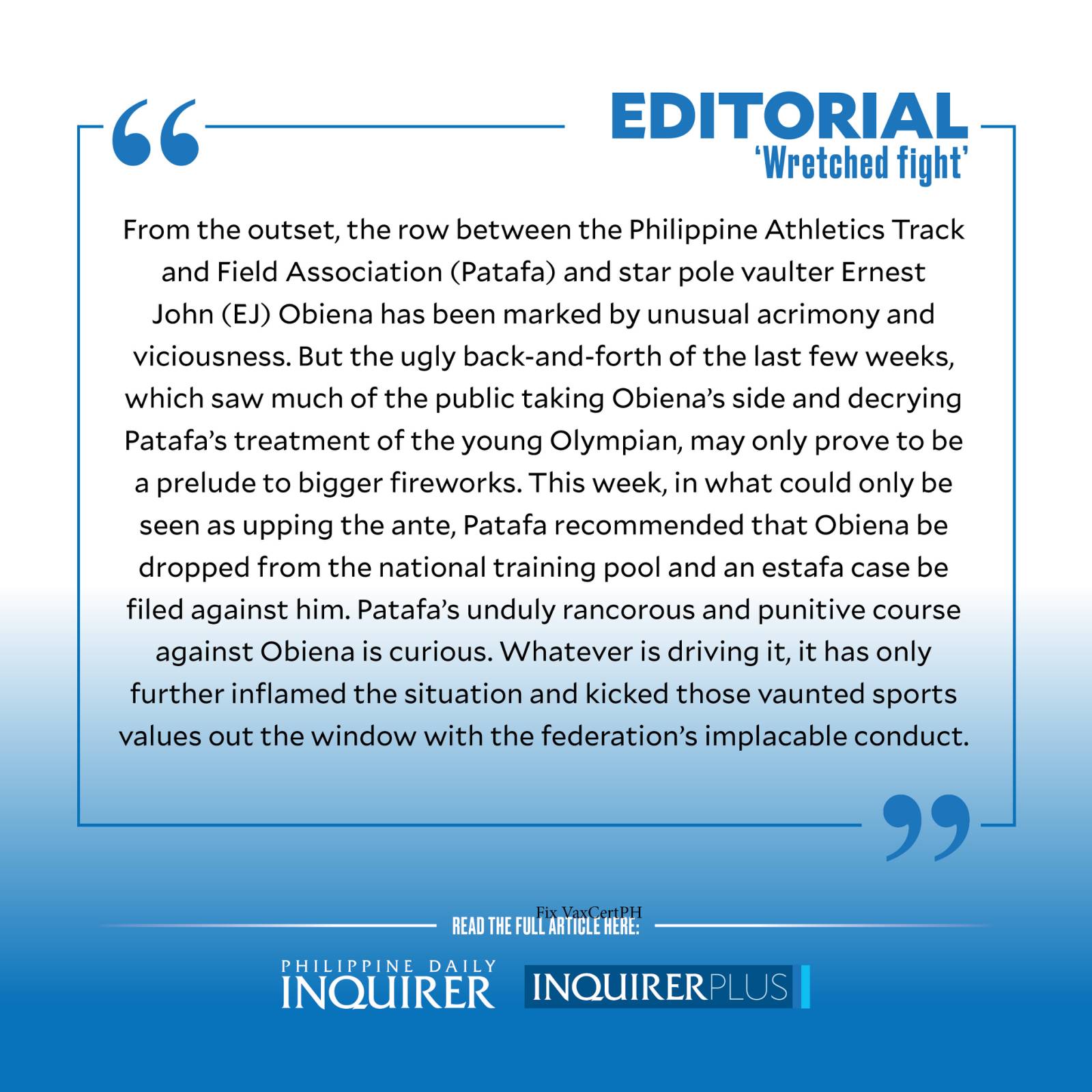 From the outset, the row between the Philippine Athletics Track and Field Association (Patafa) and star pole vaulter Ernest John (EJ) Obiena has been marked by unusual acrimony and viciousness. But the ugly back-and-forth of the last few weeks, which saw much of the public taking Obiena’s side and decrying Patafa’s treatment of the young Olympian, may only prove to be a prelude to bigger fireworks. This week, in what could only be seen as upping the ante, Patafa recommended that Obiena be dropped from the national training pool and an estafa case be filed against him. Sanctions were similarly recommended against his coach Vitaly Petrov, his adviser James Lafferty, and his mother, Jeanette Obiena.

According to Patafa president Philip Ella Juico, Obiena allegedly misappropriated EUR 61,026.80 (P3,661,608) released to him by the Patafa and the Philippine Sports Commission (PSC) for Petrov’s coaching fees. “(A)s professionals we should account for all the funds, government and private, given to us,” Juico said Tuesday in a press conference. Obiena “knew the consequences of what he was doing as he repeatedly produced those spurious documents,” he added, referring to the liquidation reports submitted by the athlete.

In a statement, Obiena, who had previously flatly denied the accusations and described Patafa’s accusations as “slanderous,” said he was “saddened by the decision … but not really surprised.” The Patafa proceedings, he lamented, “had the look and feel of a witch hunt” from the start. “The only thing we truly own in life is our reputation,” he had declared in November last year. “I will fiercely defend mine from baseless allegations, which expose the political underbelly of some in the world of sports.”

That’s putting it mildly. The controversy that threatens to sink the career of one of the country’s most promising Olympic hopefuls—Obiena ranks sixth in the world, and was the lone Asian to make the pole vault final in the Tokyo Olympics in August 2021—exposes not only political underbellies, but wholesale dysfunction in the ranks of the sports bodies governing Philippine sports.

The Philippine Olympic Committee (POC), Patafa’s mother organization, has taken Obiena’s side. “We in the POC will make sure EJ will be in Hanoi and Hangzhou, and in all other major world competitions. We’ll fight for EJ,” said POC president Abraham Tolentino, who called Juico’s recommendation “a vengeful act.” Following Juico’s “malicious public accusations” against Obiena late last year, the POC declared the Patafa official “persona non grata.”

Petrov has alleged further unseemly behavior on the part of Juico. He said he was “tricked” by Patafa into issuing statements to build a case against Obiena, and that he had in fact been fully paid by Obiena for his services. Obiena, for his part, admitted lapses in paperwork, but pleaded that accounting and payroll should not be an additional burden as he focuses on his training. Funding for the pole vaulter’s training in Italy has been suspended pending investigation into Patafa’s claims.

A “broken system” of funding athletes may be behind this mess, as revealed during a hearing by the House committee on youth and sports development in December last year. The system “basically forces an athlete to front the money, and they only get reimbursed after a long period of time,” Lafferty explained. Obiena had a key point of complaint: Why doesn’t Patafa “do its job and pay the coaches directly,” allowing him “to focus on training rather than accounting?” Paying his team directly would also “avoid unnecessary banking fees and streamline payment procedure and liquidation.” Patafa said it was preparing to do so, until the pandemic intervened.

Patafa’s move to drop the prized Obiena from the national pool seems extreme and harsh, and has only incensed more citizens. Boxer Eumir Marcial, Obiena’s fellow Olympian who won bronze in the 2020 Tokyo Games, denounced the proceedings as a “wretched fight” and Patafa’s actions as “some sort of invalidation of the efforts and sacrifice that EJ has made to bring honor to our country, something that every athlete can strongly relate to.”

The PSC, meanwhile, has tried to stop the raging fire by offering mediation between the two camps and demanding that Obiena finish his liquidation of accounts, on one hand, and that Patafa “reconsider their declaration of dropping EJ from their rolls,” on the other. This “mad issue” should stop, it said, citing the Olympic values of “excellence, friendship, and respect” as a basis to settle the matter.

Patafa’s unduly rancorous and punitive course against Obiena is curious. Whatever is driving it, it has only further inflamed the situation and kicked those vaunted sports values out the window with the federation’s implacable conduct.

Read Next
Living with Omicron
EDITORS' PICK
Acer starts the year off strong with the Aspire Vero National Geographic Edition
Metro Manila posts lowest temperature yet this ‘amihan’ season at 19°C
DOH: 28,471 new COVID-19 cases in PH; active cases now 284,458
On Day 2 of implementation, gov’t says workers now exempt from ‘no vax, no ride’ policy
Over 3 Million worth of prizes to be won at Smart Padala’s SENDali Manalo Promo!
Gear up and get ready to play with Yamaha Mio Gear
MOST READ
Lucky plants to grow in 2022
Derek Ramsay on being married to Ellen Adarna: ‘Gumaan ‘yung mundo ko’
Cristalle Belo on raising her kids in Australia: ‘We set limits’
Unvaccinated has rights but it has limits—DOJ
Don't miss out on the latest news and information.