The ink has barely dried on the executive order creating a new office that will “heal the wounds caused by armed conflict and foster genuine peace, reconciliation, and unity” in the country, when a deadly clash erupted in Pikit, Cotabato that has created fresh tensions in a delicate part of Mindanao.

Manampan was able to escape from his hideout under cover of darkness, Tagum said, but when they were clearing the area, the joint police-Army team discovered more than 440 assorted motorcycles in a makeshift warehouse, as well as bomb-making components and high-powered firearms including anti-tank rocket B-40 launchers. 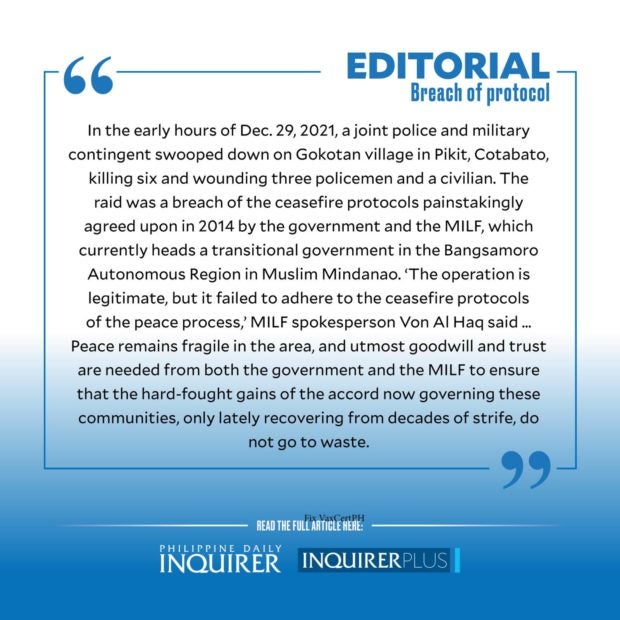 “The presence of high-powered [unlicensed] firearms makes the area a suspected lair of a lawless group,” declared Lt. Col. Maria Joyce Birrey, spokesperson of the Police Regional Office in Soccsksargen.

A human rights group, however, raised a different scenario: Based on the accounts of some of the village residents, what transpired was not a legitimate operation but a “rubout.” Drieza Lininding, chair of the Moro Consensus Group that monitors the human rights situation of Muslims in the area, called for an investigation into the bloody incident by an independent rights body. “We condemn this barbaric act, and we demand justice,” he said, adding that the motorcycles were not stolen as claimed by the military but pawned items with proper documentation.