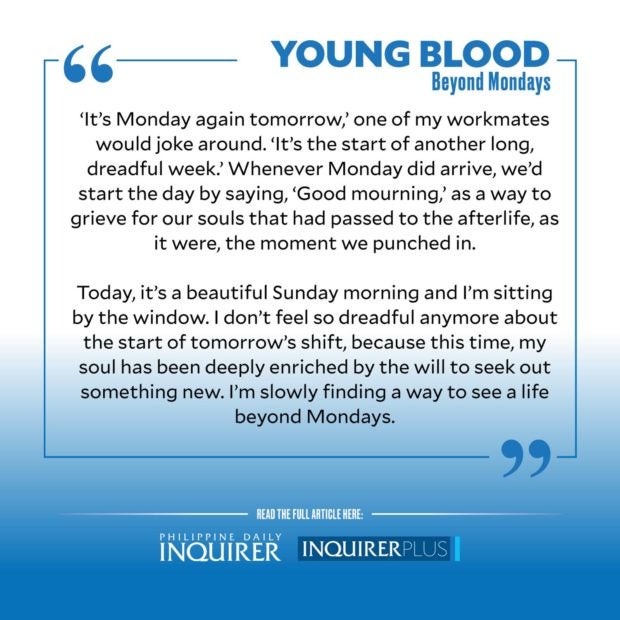 It’s Monday again tomorrow,” one of my workmates would joke around. “It’s the start of another long, dreadful week.” Whenever Monday did arrive, we’d start the day by saying, “Good mourning,” as a way to grieve for our souls that had passed to the afterlife, as it were, the moment we punched in.

We’d been making silly, deadpan jokes like this as a way to cope with our dehumanizing job. Outside the office, we decompressed by filling the void created by overwork with materialistic pursuits—adding to cart whatever we believed would make us happy again. But as we wearily counted the days till the weekend, we found it more and more difficult to mask our misery.

Initially, we tried to stand up for ourselves. But no matter what we did, nobody listened. In the eyes of management, we were merely money-making machines designed to make their numbers bright green. The humane desire to socialize, pursue creative ambitions, and have time for ourselves were reduced to mere distractions.

I shoved all my qualms under the rug, invalidating myself until I came to believe that I was just inventing my own misery. But none of it was an illusion. Everything did hurt. I would always wake up with sunken eyes, and work like a dog day and night only to see my tax money stolen by corrupt politicians. I kept trying harder and harder, hoping it would make a difference. But I ended up feeling like a burnt-out fuse.

Eventually, something broke in my head. I had a mental breakdown that caused me to go on leave for two days. Unfortunately, that was just the beginning. It would soon be followed by a series of absences filled with broken promises of catching up.

My mental breakdown was more than just a result of unpleasant working conditions. It was also the culmination of years of frustration at how the world is designed to serve modern life.

I was obsessively creative growing up, mainly because I was surrounded by artistic family members. Instead of picking up a paintbrush, I picked up pen and paper and started scribbling down notes about my personal life. Soon, my imagination expanded, and I began penning my own short stories and poems. But when I got deeper into my education, somehow my imagination dwindled.

After a while, I found myself unable to produce original ideas. I was merely following what was already thought out for me. Although this upset me, I did what I was told to do. I passed my exams, got good grades, and became your typical walking Wikipedia. But I remained displeased, and I put up with it until I reached second-year college, where I told my parents I was dropping out. I was a frustrated kid who wanted to pursue a path different from what I had been expected to do.

At work, I let myself be stripped off of nearly everything that I was. I was turned into a blank slate and remodeled into a well-packaged robot, to be used and abused by the company. It was just easier to surrender; I even came to convince myself that time would only mean something if it was spent making money.

But then I pictured myself being a cog in this machine for years on end, and I saw a person alone in a dark, ventilated room with blue light from the TV screen shining on his face, with empty eyes staring blankly into the void. Surrounded by trinkets bought from his most recent paycheck, he would pop a pill every once in a while to numb himself enough to power through another day. Is this what I really wanted, to worship industriousness to the point of discrediting everything else?

Sadly, resolving this turmoil hasn’t been easy. Whenever I reach out to someone, I’m almost always shut down for supposedly being ungrateful. But how can I be grateful for a system that invalidates my needs? To ask for a better life isn’t to be ungrateful, it’s to be grateful enough to care at all.

Still, I understand where people are coming from. We live in a system where it’s hard to see any life out there beyond the fence. Oftentimes, I’ve thought of running away. Pack my bags, set up a tent in the forest, and be free from all this. But maybe I don’t have to. Maybe I can stay here and imagine a better future.

Modern life’s attempts to eclipse my spirit may be relentless, but I can still see the faint flicker of my imagination. Somewhere in the dark expanse, the small candle I wield may reveal more communities of writers. We’ll gather around the warmth of our fire and write and tell stories to each other.

Today, it’s a beautiful Sunday morning and I’m sitting by the window. I don’t feel so dreadful anymore about the start of tomorrow’s shift, because this time, my soul has been deeply enriched by the will to seek out something new. I’m slowly finding a way to see a life beyond Mondays.

Alex Jasper Tan, 23, spends most of his spare time daydreaming about seemingly random events and trying to find sense amid the chaos.