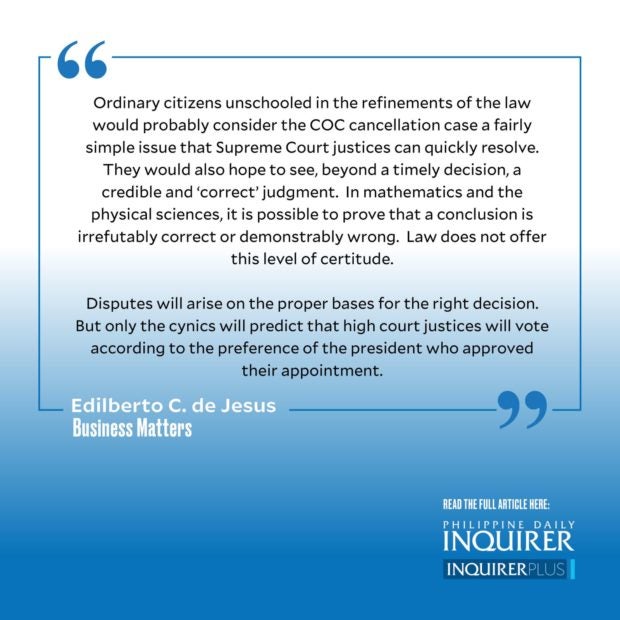 The Commission on Elections (Comelec) has shown a welcome determination to deal decisively with the cases filed against the eligibility of Ferdinand “Bongbong” Marcos Jr. to contest the presidency in 2022. It has already summarily dismissed one petition asking for Marcos Jr. to be declared a nuisance candidate.

It should help that, in the most serious and substantial case, petitioners have obtained, as suggested by retired chief justice Artemio Panganiban, a certification from Gregorio C. Tallud, Clerk of Court responsible for all 57 branches of the Quezon City Regional Trial Court (RTC). Tallud confirmed that the RTC had no record of compliance with the judgment on Marcos Jr.’s tax evasion cases from 1982-1985. The penalties arising from his conviction, therefore, should stand, including the loss of the privilege to run for public office. The certification should enable the Comelec to render summary judgment to cancel Marcos Jr.’s COC.

But political insiders believe that the Comelec decision will be subject to appeal and will reach the Supreme Court. In recent decisions, the Court has expressed dismay at the injustice suffered by citizens when cases drag on for decades. The high court will, hopefully, model the desired dispatch in resolving legal cases by ruling clearly and decisively on Marcos Jr.’s COC cancellation. The Filipino people must pray that the Supreme Court will do this as a duty it owes the country—to prevent delays from extending the decision deep into the campaign period. The doubts cast on the legitimacy of Marcos Jr.’s candidacy cannot be allowed to distract from the critical issues upon which voters should base their presidential choice.

The president whose ascent to power is suspect cannot govern effectively. Coercion and corruption in the 1969 elections tainted the success of Ferdinand Marcos in winning for the first time in the country’s history reelection to a second presidential term, and fueled the political ferment that triggered the First Quarter Storm. The country suffered greatly from the political polarization caused by doubts on the legitimacy of Arroyo’s promotion to the presidency in 2001, after Edsa II forced Joseph “Erap” Estrada to leave Malacañang and surrender the presidency. The attack on the presidential palace by disaffected Estrada supporters that national forces suppressed aborted an Edsa III revolt, but showed the wide political and socioeconomic divide that had opened up.

Prohibited communications with the Comelec during the campaign period, leading to the “Hyatt 10” resignation of key Arroyo Cabinet members and reported cheating, similarly clouded the credibility of Arroyo’s election in 2004, from which she was never able to recover. In her nine years as president, Arroyo never earned positive trust and performance ratings from the majority of the public. Vulnerable to the sword of impeachment over her head, losing experienced, trusted officials, and lacking a popular base, Arroyo found herself bullied by Congress, enmeshed in corruption issues involving Chinese firms, and constrained in her efforts to address critical national economic and security problems.

Opinion polls showing Marcos Jr. as currently the leading candidate encourage his camp, but do not really mean much in a presidential race that has not been officially begun. Jojo Binay started as the dominant frontrunner in the 2016 presidential race but faded in the homestretch. Marcos Jr.’s tax evasion conviction and an invalid COC make him a controversial candidate and, should he magically win both the suits and the election, a compromised president. Like Arroyo, he will continue to be a polarizing president, lacking the moral ascendancy to mobilize popular support for the difficult decisions confronting the country.

Ordinary citizens unschooled in the refinements of the law would probably consider the COC cancellation case a fairly simple issue that Supreme Court justices can quickly resolve. They would also hope to see, beyond a timely decision, a credible and “correct” judgment. In mathematics and the physical sciences, it is possible to prove that a conclusion is irrefutably correct or demonstrably wrong. Law does not offer this level of certitude.

Disputes will arise on the proper bases for the right decision. But only the cynics will predict that high court justices will vote according to the preference of the president who approved their appointment.