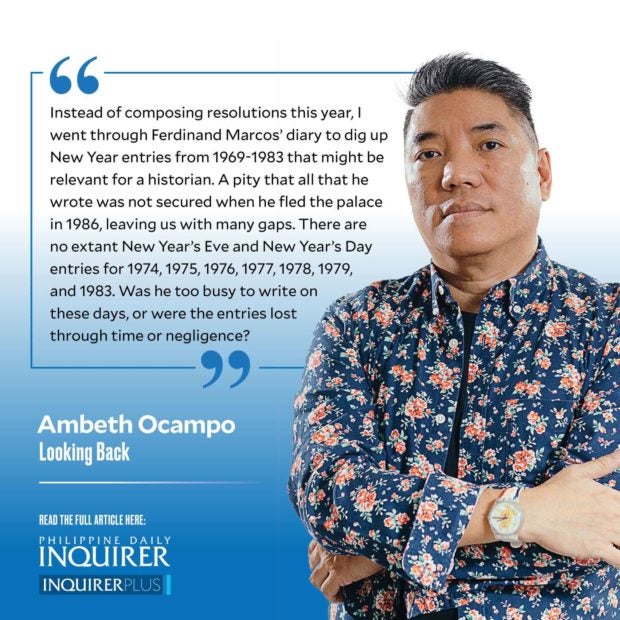 Noche buena (Christmas Eve) is not the same as media noche (literally, “middle of the night,” but refers to New Year’s Eve). Before the government started a crackdown on unregulated Bocaue firecrackers, there were two types of fireworks — those that just made light, such as sparklers, Roman Candle, fountain; and those that made noise, such as kwitis, watusi, bawang, baby rocket, laventador, 5-Star, triangulo, sinturon ni Hudas, whistle bomb, Lolo, and Super Lolo. In recent years, the names of the noisemakers have become even more varied and amusing — Giant Whistle Bomb, Atomic Triangulo — or politically incorrect: Goodbye Bading, Goodbye Philippines, Goodbye Napoles, Goodbye de Lima, and even Bin Laden.

When I entered my teens, I was encouraged to draw a list of resolutions that were meant to be broken, but these provided an occasion to reflect on the old year and to plan for a better year ahead.

Instead of composing resolutions this year, I went through Ferdinand Marcos’ diary to dig up New Year entries from 1969-1983 that might be relevant for a historian. After all, on Dec. 31, 1969, on the eve of his second term as president, he said he had “given away by general instrument of transfer all my worldly possessions to the Filipino people through a foundation to be organized known as the Marcos foundation … [to] be used in advancing education, science, technology and the arts.”

On New Year’s Day 1969, Marcos broke up a dinner hosted by Maria Luisa Madrigal-Vazquez for visiting US Vice President Spiro Agnew and the foreign ministers who were in attendance at the second Marcos inaugural. He left before midnight and greeted 1970 holding up sparklers in the Malacañang lawn with his children.

On Dec. 31, 1970, he was contemplating martial law: “I am reviewing the contingency plan for the proclamation of martial law, if the occasion demands it. This is OPLAN Bukang Liwayway. As we were gathered to await the new year, I was a little sad that I and all these otherwise intelligent people wasted our precious time on empty ceremony. I wondered whether the year 1971 would usher in an authoritarian government in the Philippines. During the mass, I prayed to God for strength, wisdom and guidance. For I knew I would have to make awesome decisions this year.”

Oplan Bukang Liwayway (“break of dawn”) was already in the works: “There must be the least rupture of government function, but our orientation and philosophy must be completely altered. So instead of civil officials being commissioned in the Armed Forces, a Military Administration should be established under which the civil officials could function with military oversight. But all judicial decisions and legislative acts should be subject to review by the Commander-in-Chief or his office.”

On Dec. 31, 1971, Marcos announced the lifting of the suspension of the writ of habeas corpus nationwide. He denied newspaper reports that he had ordered diplomatic missions abroad, without the knowledge of the foreign secretary, to report on instances of the proclamation of martial law: “The whole thing is false and silly as I have not even thought of issuing such an order for such a study to anyone. [Juan] Johnny Ponce Enrile and I have been the only ones studying the possible legal requirements for a proclamation of martial law if the need arises. This is a part of the old contingency plan.”

On Dec. 31, 1972, after attending the New Year’s Eve Mass, dinner, and dance, Marcos scribbled a short note, confident about survey results that showed people wanted martial law to continue. He was grateful that his wife survived an assassination attempt.