One photo and a thousand tweets 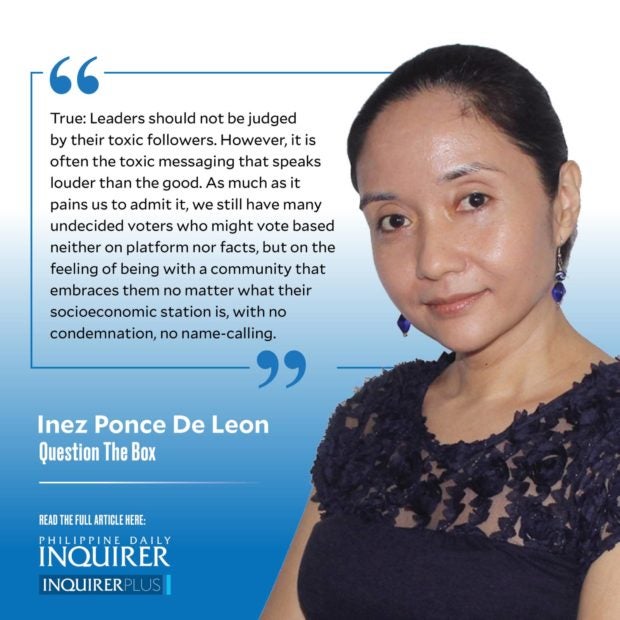 On Christmas weekend, Twitter blew up with yet another toxic exchange, this time after Leody de Guzman, candidate for president, posted his family photo and greeted everyone a “Merry Christmas.”

The photograph showed Ka Leody and his family at their dining table. Their house was elegantly decorated in red and white; his two children held up their family pets (a black cat and a corgi) decked out in holiday garb; and everything, from the centerpiece to the table napkins, looked a lot like Christmas.

The proper response, one might think, would have been to greet the family “Merry Christmas” back. However, some Twitter users called out the labor leader and his followers for being hypocrites. Their reasoning: De Guzman’s followers had once called Leni Robredo and her followers “elitists,” so they had to answer the accusations by pointing out that De Guzman was living richly and was therefore not living up to his status as a full-time activist.

Others spoke up in his defense. De Guzman is an entrepreneur. He worked in a factory for a long time, but had a high enough position so that he retired with good pay and benefits. His family lives at home and everyone contributes to the income, and they know how to save, invest, and spend wisely. Why can’t they enjoy Christmas the way they want to?

And so, the debate commenced. At one point, the preoccupation with the contents of the photo sounded eerily like the old fixation of uber-fans on then-candidate Rodrigo Duterte with his so-called simple life represented by a mosquito net over his bed.

The issue has since died (and I hope it doesn’t repeat today on the eve of 2022), but the quarrel boiled down to a simple premise: “You started it.”

What exactly was “started”? It was name-calling on either side, and in reaction to the term “elitist.” “Elitist” is often used to mean snobbery; however, “elitism” has a broader definition in political ideology: It is the belief that the elite should govern society. The “elite” can include those with any kind of wealth and power: financial, intellectual, social, or cultural.

Having savings, a diploma, or connections could thus make one part of the elite, but not necessarily elitist. To be elitist is to allow the elite to remain in and abuse their power. Those without power could therefore be elitist when they, regardless of their socioeconomic status, surrender their agency to make their own decisions to people whom they think have more wealth than they do.

What occurred on Twitter was petty, and begs several questions: Why should previous insults have to be answered at all? Why the vitriol, the toxicity, the judgment?

True: Leaders should not be judged by their toxic followers. However, it is often the toxic messaging that speaks louder than the good. As much as it pains us to admit it, we still have many undecided voters who might vote based neither on platform nor facts, but on the feeling of being with a community that embraces them no matter what their socioeconomic station is, with no condemnation, no name-calling.

Read Next
‘Our voice has not been recognized’: Plant workers appeal to the Supreme Court
EDITORS' PICK
Gear up and get ready to play with Yamaha Mio Gear
Acer starts the year off strong with the Aspire Vero National Geographic Edition
DOH: 28,471 new COVID-19 cases in PH; active cases now 284,458
On Day 2 of implementation, gov’t says workers now exempt from ‘no vax, no ride’ policy
Over 3 Million worth of prizes to be won at Smart Padala’s SENDali Manalo Promo!
Metro Manila posts lowest temperature yet this ‘amihan’ season at 19°C
MOST READ
In Batanes, octogenarian dies of COVID-19
Cold-case investigation names surprise suspect in Anne Frank’s betrayal
Czech anti-vax singer dies after deliberate infection
Derek Ramsay on being married to Ellen Adarna: ‘Gumaan ‘yung mundo ko’
Don't miss out on the latest news and information.