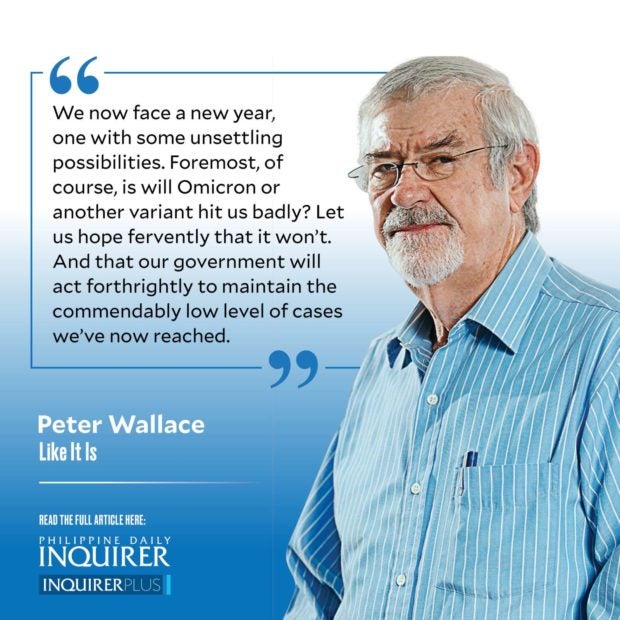 We’ve been through a very tough year, too much of it in isolation. It’s been depressing and disorienting for many of us as our lives changed, in some ways forever. So I thought I might end the year on a cheerful, more personal note.

Let me start with Christmas. No one else starts to celebrate as the “bers” begin. But the Philippines does. With around 80 percent of the population not just Christian but Catholic, the Catholic faith dominates life everywhere. No meeting can start without a prayer despite the Constitution’s clear admonition that this is a sectarian society. (Article 2. Section 6. The separation of Church and State shall be inviolable). But not all are Catholic; 6 percent are Muslims, and the remaining 14 percent practice other religions. I wonder what they think when a prayer goes to God, not Allah.

I also have difficulty understanding how supposedly devout Catholics can bring the Philippines down to number 115 out of 180 countries in the Transparency International’s Corruption Perceptions Index. Do they expect it to be more fun in hell, where I presume they are destined for?

For the honest among you, I hope you had a lovely and safe Christmas with your families that you well deserve.

We now face a new year, one with some unsettling possibilities. Foremost, of course, is will Omicron or another variant hit us badly? Let us hope fervently that it won’t. And that our government will act forthrightly to maintain the commendably low level of cases we’ve now reached.

Then there’s who. Who will be our next leader? My wish is that voters vote sensibly. Regrettably, I fear they won’t. Emotional choice seems to override a knowledgeable one. Whoever it is, Filipinos will remain their delightful, happy selves.

Certainly that’s a major reason why I’ve remained here, for nearly half a century (48 years) now. I may actually get there, although at 82 that’s inevitably at some risk. I’ve been here longer than 83 percent of Filipinos, and have no intention of leaving. This is my home. A home with a wonderful Filipino wife for the past 42 years, and a couple of successful kids well on the way in their chosen careers.

I started in this country building a factory for a US company, then led several other companies in a range of activities before starting my own business in 1982 that is still going well. It’s doing so because I have Filipinos working for me. Filipinos are a race where loyalty, if you look after them, is a given. And hard work just happens.

A little thing that’s always impressed me is teamsmanship. Not only at the intellectual level, but in physical terms, too. A team of young men can work out how to lift, and did lift, an impossibly heavy machine in my workshop and move it elsewhere. I’ve little doubt that my workshop is the best personal one in the Philippines. It’s where I, as an engineer, get great pleasure fixing things, building things, creating things. With it, I’ve never had a lonely day in my life as there’s always something to keep me occupied.

Loneliness is also banished by the joy of chambers. The various chambers I’ve belonged to through the years have been how I’ve developed the many friends that make the Philippines home. Being actively involved and not just as a passive attendee is how the friendships grow. But I do rather wish they’d dispense with the lengthy introductions, sometimes almost longer than the speech. A very, very brief one is surely enough. We know these people.

I’ve enjoyed, too, the numerous interchanges with government officials over the years. In our areas of concern, business and economics, they have been a great bunch of people, stimulating to work with toward a better life for all. It’s worked. People complain of this and that and their dissatisfaction with the government of the time. But the Philippines is much advanced from what it was in 1975 when I first visited and fell in love with the country and its people. Especially, I’ll be frank about it, the Filipino women. They’re why I married one of the best of them. We met on a yacht, sharing a love of sailing. I’ve owned a boat of one sort or another pretty much all my life, with a 10-year break as a racing car driver in my more abandoned youth. We still own boats at our house in Lake Caliraya.

One thing I’m envious of, though, is the ability to sing. Every Filipino can. You should listen to Bobby de Ocampo croon at an international level sometime. My wife will divorce me if I sing.

Well, there you have it. There’s a vibrancy in the Philippines that just excites every day. It’s a land you can’t help but love. May 2022 be a year of recovery for us all. Happy New Year.

TAGS: life in the Philippines, Like It Is, Peter Wallace