Wisdom of our elders 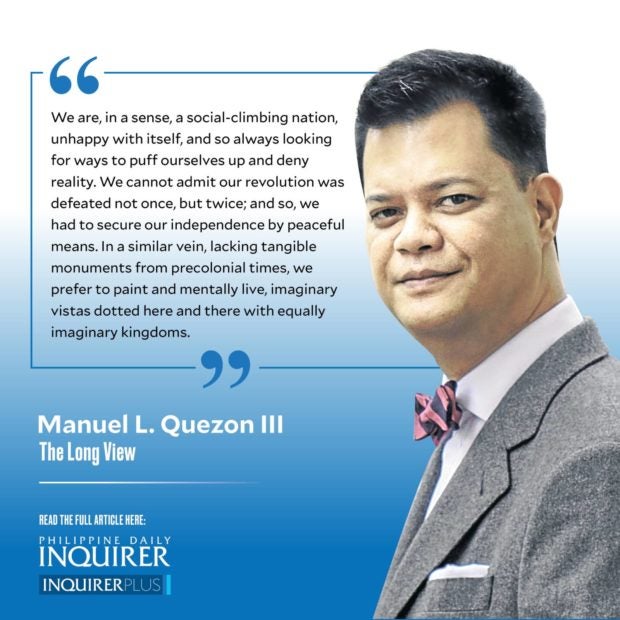 I always considered it a stroke of genius that earlier generations, in their wisdom, decided that the terms of elected officials should begin on Dec. 30, Rizal Day. At least, that was the case from the time of the second Commonwealth presidential election, held in November 1941, and the terms that began, 80 years ago tomorrow, on Dec. 30, 1941, when Chief Justice Jose Abad Santos swore into office Manuel L. Quezon and Sergio Osmeña for a second term. The last president to begin his term on Dec. 30 was Ferdinand Marcos, who was also the second president elected to a second term, in 1969. The impression I have is that Marcos decided to shift the terms not only because he could (reason enough for any dictator: who wants to share the stage on inauguration day, with the ghost of Rizal?), but because it seems May was considered less typhoon-prone while November, the season for elections from prewar to premartial law days, was typhoon-prone. (This, by the way, would be an interesting topic for the climate historian interested in looking at how changing weather patterns affect political institutions.)

Ironically, in retrospect, it seems that after the so-called National Centennial in 1998 (it should have been in 1996!) the commemoration of Rizal Day, like so many other of our national observances, ran out of steam because as the older generations turned senile or died, Filipinos ran out of something interesting or relevant to say. It may also be that the effort to downgrade Rizal began to sink in around that time, too. But a case could be made, since it dates back to Aguinaldo’s second round of the revolution, that Rizal Day is our oldest national observance and a durable link with a popular consensus surprisingly reflected in our official rituals. So far, at least, Rizal Day seems safe when nothing else is, anymore.

Some years ago, I was bothered by a question arising out of an observation: We are, in a sense, a social-climbing nation, unhappy with itself, and so always looking for ways to puff ourselves up and deny reality. We cannot admit our revolution was defeated not once, but twice; and so, we had to secure our independence by peaceful means. In a similar vein, lacking tangible monuments from precolonial times, we prefer to paint and mentally live, imaginary vistas dotted here and there with equally imaginary kingdoms. I wondered, if we somehow refuse to accept the indubitable reality that we have only been independent since July 4, 1946 (no nation on the planet dates its diplomatic relations with us before this date), and what we want is to substitute the older for the true, why 1898 and not 1896? If our revolution began in August 1896, why does hardly anyone advocate independence day on the date the fight for freedom began?

The long and short of it is the generation actually fighting the revolution were meticulously record-keepers in peace but sloppy in times of war; and the pendulum has swung, particularly after all the revolutionaries died, between Pugad Lawin and Balintawak and various dates. Yet as I understand the efforts of historians like Soledad Borromeo-Buehler and others, the evidence keeps leading back to something the Katipuneros who survived the revolution had decided among themselves all along: it was in Balintawak, and it was on Aug. 26, the date of the first battle of the revolution, that mattered to them. I don’t know why we consider ourselves better than them. If that was how they defined it, I would think a certain veneration is due that original consensus.

In the same vein, Bataan Day under Marcos becoming a generic Day of Valor is objectionable; and so are efforts to revise the foundation date of the Philippine Military Academy (PMA), when the people who knew best — the actual first class of the PMA, as loudly and rightly exemplified by the objections made during his lifetime by Ramon A. Alcaraz, who insisted its proper anniversary should be on Dec. 21, 1936 — should have the precedence due them by not just seniority but reality. The Army of the First Republic, which grew out of the destruction of the original revolutionary government, was defeated. It was not restored. An entirely new, and modern, armed forces under civilian democratic control, was founded — in fulfillment, in many ways, of the aspirations of the revolutionary generation; but it is its own thing, with its own traditions, its own history, which mirrors that of the republic itself.