On struggle and gratitude: A stoic guide 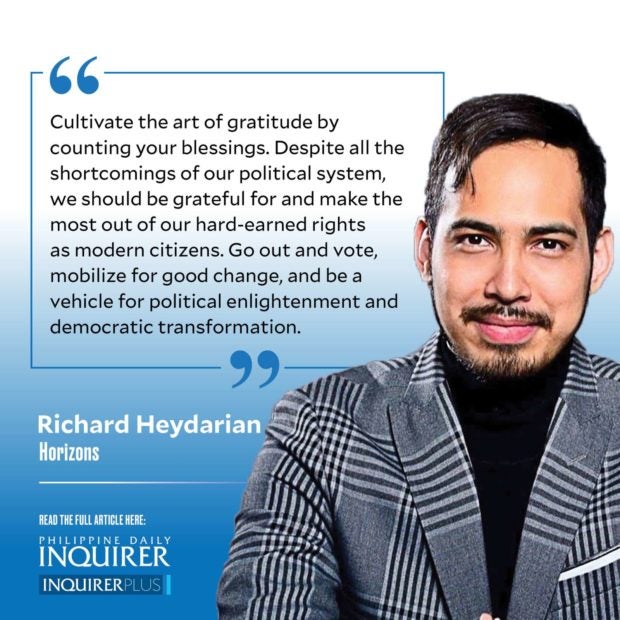 As yet another eventful year draws to close and we take stock of all that has been, I thought of penning a column that delves deeper into the inextricably linked themes of struggle and gratitude.

There is this scene (spoiler alert) in the much-anticipated satirical movie “Don’t Look Up” where the two main protagonists, Randall Mindy (Leonardo DiCaprio) and Kate Dibiasky (Jennifer Lawrence), are surrounded by their loved ones in the most terrifying moment of their lives.

Instead of succumbing to anguish and helplessly delving on human folly, the two astronomers opt for heartfelt gratitude after months of herculean struggle to save humanity. “We really did have everything, didn’t we? If you think about it,” says Randall, gazing around the table at friends and family as the apocalypse approaches. Kate, sitting across the table with her newfound love, remarks how they must be “grateful that we tried [our best to save humanity]”.

It’s a curiously soulful scene in an abrasive parody of the inanities of the modern world, where a toxic cocktail of performative populism, mindless consumerism, and Big Tech hubris has conspired against nothing less than the survival of human species. The protagonists’ admirable disposition at their darkest hour is a classic expression of stoic philosophy

Countless Filipinos, including the outgoing President, are perturbed by the country’s prospects following next year’s presidential elections. Unsurprisingly, I have heard friends and colleagues, not to mention one of the presidential candidates, warning of a mass exodus of citizens in anticipation of even greater political disasters in the near future.

So, permit me, dear readers, to share with you five key lessons on struggle and gratitude from the stoic philosophy, which has guided countless leaders and concerned citizens throughout the centuries.

First of all, have the courage to discover what you can truly change as an individual and, accordingly, the humility to accept what is beyond the grasp of human agency. As the stoic sage Epictetus advised, “There is but one way to tranquility of mind and happiness, and that is to account no external things thine own, but to commit all to God.” Of course, we should fight the good fight to the best of our abilities. But we should also resist the temptation of megalomania, which, in the words of Seneca, is tantamount to “arranging what lies in Fortune’s control, and abandoning what lies in yours.”

Second, cultivate the art of gratitude by counting your blessings. Despite all the shortcomings of our political system, we should be grateful for and make the most out of our hard-earned rights as modern citizens. Go out and vote, mobilize for good change, and be a vehicle for political enlightenment and democratic transformation. Even the workaholic emperor Marcus Aurelius had the presence of mind to advise, “When you arise in the morning think of what a privilege it is to be alive, to think, to enjoy, to love…”

Third, cultivate your skills and remain true to your ultimate calling. We can best contribute to our societies when we improve ourselves with discipline and courage. As Seneca reminded his fellow Romans, “Life is long enough, and a sufficiently generous amount has been given to us for the highest achievements if it were all well invested.”

Fourth, embrace struggle, since this is the bridge to not only resilience, but also to leading a meaningful life. Life, said Aurelius, “is more like wrestling than like dancing,” thus one should be like a “jutting rock against which waves are constantly crashing, and all around it the frothing foam of the waters then settles back down.”

Finally, instead of despairing over immediate circumstances and obsessing over the fate of single political variable, focus on the big picture. In the words of Epictetus, just as a “ship should not ride on a single anchor, nor [should one’s] life on a single hope.”

Aurelius also advised that we should develop a “deep feeling for and a deep understanding of the working of the Whole,” since our “salvation” lies in “seeing what each thing is in its entirety, both its material and its cause.” Clearly, the same principle applies to reviving our democratic institutions.