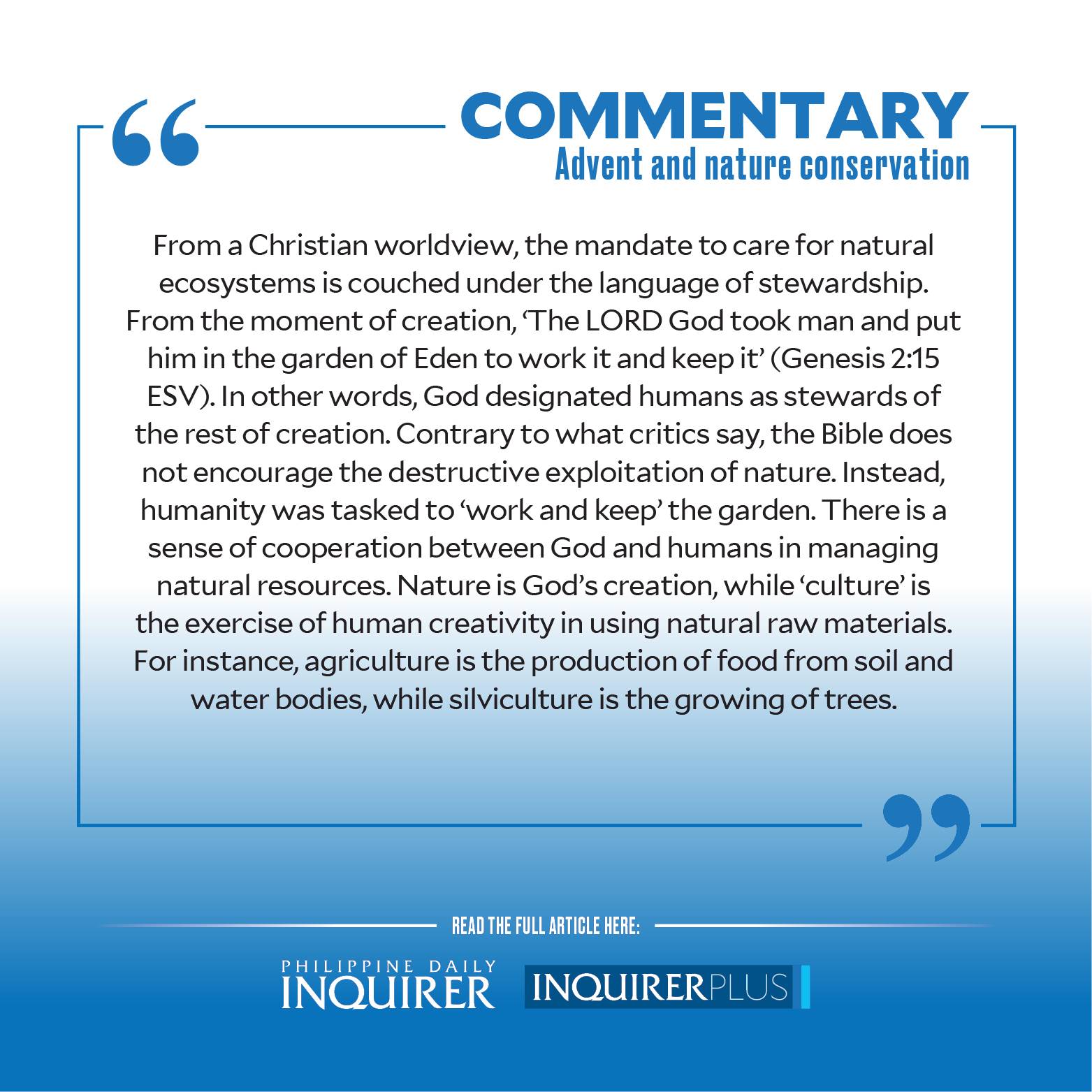 The Advent season highlights the amazing grace of God as manifested in the incarnation of the Lord Jesus Christ. At the same time, the Yuletide reminds us of the significance of one’s faith to how we view the world and the choices we make about it.

There is increasing recognition globally that faith-based organizations and their adherents are critical in solving our planet’s most intractable environmental challenges. For example, of the 1,200 organizations that recently committed to divest $14.5 trillion from fossil-fuel companies to mitigate climate change, one-third are faith-based organizations, according to Tobias Müller in an article published in the journal Nature (2021).

The Yale University’s Forum on Religion and Ecology has compiled the statements from the world’s major religions which support global efforts to address climate change. The key document for the Roman Catholic Church is “Laudato Si’” (2015), which spans a whole gamut of environmental issues. The Islamic Declaration on Global Climate Change also came out in 2015. Similarly, various Protestant denominations and evangelicals have issued their respective climate change calls to action. In the Philippines, several religious groups have recently called for climate-smart investment choices among faith-based organizations.

From a Christian worldview, the mandate to care for natural ecosystems is couched under the language of stewardship. From the moment of creation, “The LORD God took man and put him in the garden of Eden to work it and keep it” (Genesis 2:15 ESV). In other words, God designated humans as stewards of the rest of creation. Contrary to what critics say, the Bible does not encourage the destructive exploitation of nature. Instead, humanity was tasked to “work and keep” the garden. There is a sense of cooperation between God and humans in managing natural resources. Nature is God’s creation, while “culture” is the exercise of human creativity in using natural raw materials. For instance, agriculture is the production of food from soil and water bodies, while silviculture is the growing of trees.

Still, it cannot be denied that humans of various faiths have not always been obedient to the divine mandate. The Biblical narrative attributes this malevolence to the entrance of sin and evil in the world.

This brings us back to Advent. Christians believe that Jesus came to earth to reverse the curse of sin by offering Himself as the ultimate sacrifice to redeem fallen humans. But it does not stop there. At the end of this age, it is expected that God will reverse the scar of evil and renew the earth to even greater glory.

Thus, beyond the material trappings of Christmas lies hope. As we seek to fulfill our role as stewards of God’s wondrous creation, we know that a time will come when the cosmos will be transformed in ways too glorious to fully comprehend.

Dr. Rodel D. Lasco is an author of several IPCC reports, including the forthcoming Working Group II sixth assessment report. He is the executive director of The OML Center, a foundation devoted to discovering climate change adaptation solutions (http://www.omlopezcenter.org/).