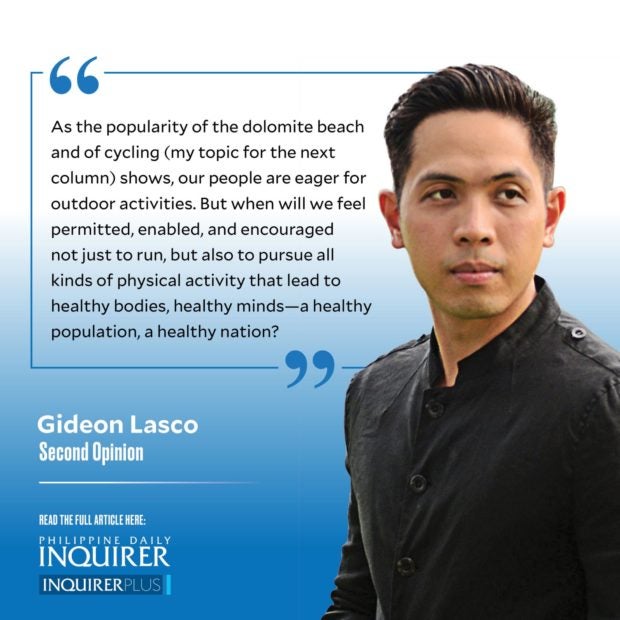 Mexico City—I joined the Mexico City Marathon last Nov. 28 and I thoroughly enjoyed every kilometer of it, from the start at the main campus of the Universidad Nacional Autónoma de México or UNAM (a Unesco World Heritage Site owing to its famous murals) to the finish line in the Centro Histórico (also a World Heritage Site owing to its long history as the former Aztec city of Tenochtitlan). The 42.195-kilometer route, which took me—a first-time marathoner—over five hours to complete, passed through Insurgentes Sur, Roma Norte, Condesa, Bosque de Chapultepec, Polanco, and finally a good stretch of Paseo de la Reforma en route to Zócalo or the main plaza.

Having (mostly) lived here since April, I saw the marathon as in a way a tribute to significant places during my stay: UNAM, after all, is the university where I’ve been taking Spanish language courses; although the classes have been virtual, being here, physically meeting with and conversing with classmates, is part and parcel of the learning. Condesa, for its part, has been my home, while the 686-hectare Bosque de Chapultepec is where—as I wrote back in May (“Parks vs the pandemic,” 5/14/21)—I have run practically every day.

Lending additional significance for me, as a Filipino, was the fact that it was in the very center where the marathon ended that our country was governed for 250 years, and that this year—2021—marks 500 years since the two events that set into motion our crossing in paths: the arrival of Magellan’s crew in the Philippines, and the fall of the Aztec Empire.

At one level, a marathon is a personal challenge, a “body project” (Shilling, 2003) or a “project of self-transformation” (Reischer, 2007) that involves the cooperation of practically every part of your body—from feet and knees to lungs and even one’s stomach—aside from having the right shoes, clothes, food (I brought a couple of energy gels and some matcha chocolates), frame of mind, and even music. It also involves months of training, without which one can easily injure one’s self. Even without injuries, Haruki Murakami’s observation is apt, if nothing else, for dead toenails: “Pain is inevitable. Suffering optional.”

But it is also a communal experience, which doubtless adds to the energy and excitement. As I claimed my marathoner’s kit at the Palacio de Deportes, I felt like Gon going to the Hunter exam, as I saw runners from all walks of life, each with a determined, excited look on their faces. During the race itself, it seemed the entire city turned out to cheer people on, many surely for their loved ones, but others just to support the whole spectacle. “You survived 2020, you can survive this marathon!”, “You no longer have feet, you have wings!”, some of their placards read. It felt like a celebration of the human spirit, and indeed even now the memories linger to give me some residual joy.

Perhaps what’s even more remarkable is how easy it is to be a runner in Mexico City, which is likely why the marathon attracted so much enthusiasm and a 14,000-strong participation.

Certainly, one factor is the altitude: At 2,200-2,300 meters above sea level, Mexico City has a year-round, Baguio-like pleasant weather, and the elevation confers additional cardiovascular strength. It is worth noting that places that have produced some of the world’s best long-distance runners—think Ethiopia and Kenya—are also set in high altitudes.

But running venues matter, too. If not for my having easy access to Chapultepec, and if not for the fact that I could run unhindered even amid the pandemic, I wouldn’t have dared to join the marathon. Aside from Chapultepec, there are many other parks within the city, not to mention runnable roads like Paseo de la Reforma. Trail runners and hikers can also have their fix in the mountains within city limits one Uber ride away, including my favorite Cerro Ajusco.

Alas, the same cannot be said of Metro Manila and many Philippine cities and towns, where what little green and open spaces we have (e.g., the Academic Oval) have been closed or restricted during much of the pandemic—even as the government’s “Build, build, build” paradigm continues to prioritize highways and roads over walkways and parks. As the popularity of the dolomite beach and of cycling (my topic for the next column) shows, our people are eager for outdoor activities. But when will we feel permitted, enabled, and encouraged not just to run, but also to pursue all kinds of physical activity that lead to healthy bodies, healthy minds—a healthy population, a healthy nation?