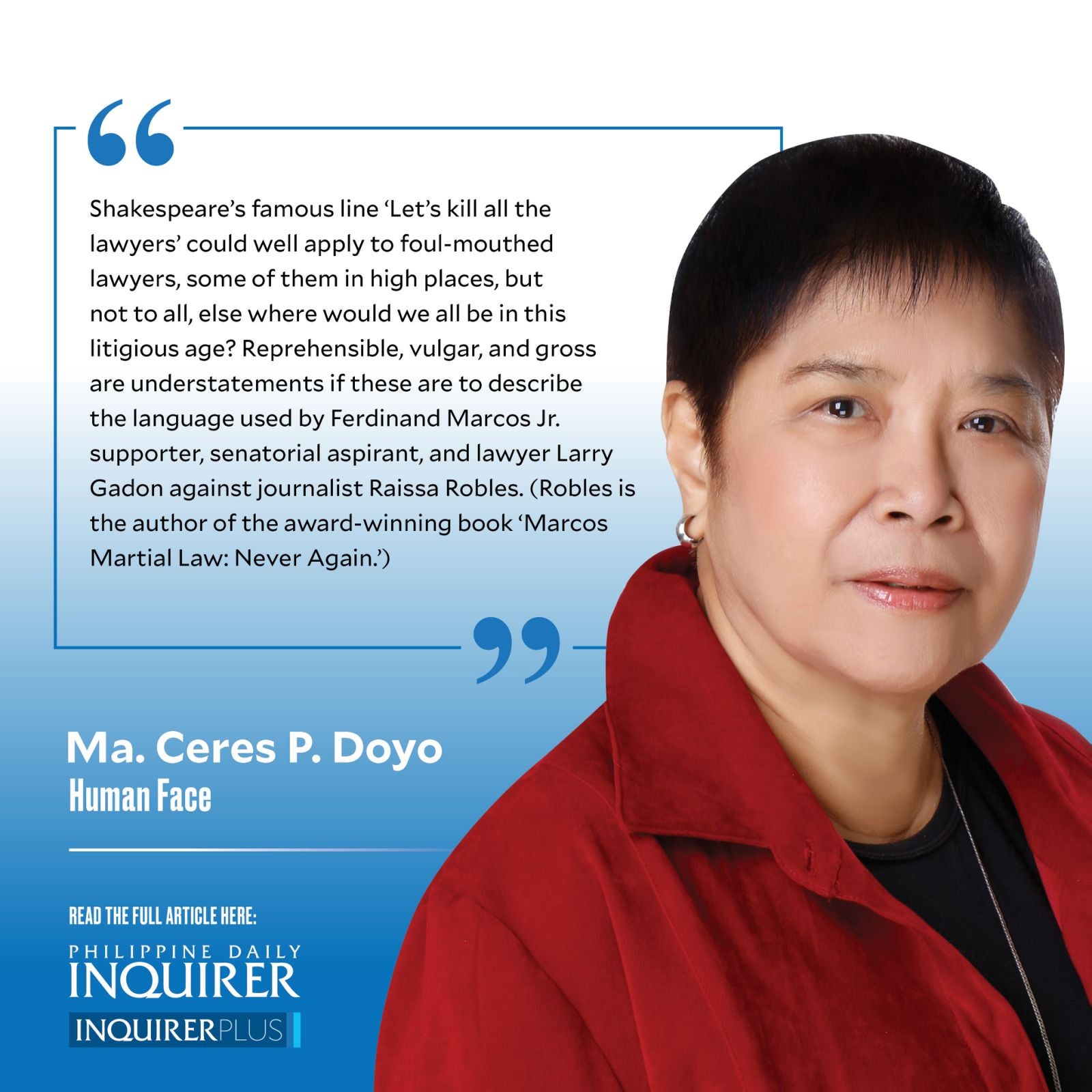 Shakespeare’s famous line “Let’s kill all the lawyers” could well apply to foul-mouthed lawyers, some of them in high places, but not to all, else where would we all be in this litigious age?

Reprehensible, vulgar, and gross are understatements if these are to describe the language used by Ferdinand Marcos Jr. supporter, senatorial aspirant, and lawyer Larry Gadon against journalist Raissa Robles. (Robles is the author of the award-winning book “Marcos Martial Law: Never Again.”)

Gadon went on social media and verbally attacked Robles for, according to him, saying that presidential candidate Marcos Jr. had failed to pay his taxes. The issues about non-paying of taxes, non-filing of income tax returns, being convicted and serving his sentence or not, and whether or not Marcos Jr. wrote falsehoods in his certificate of candidacy (COC) for president of our republic, are currently being studied by the Commission on Elections. These issues were brought up by several groups of petitioners who seek the cancellation of his COC and, separately, his disqualification.

Frothing in the mouth and with eyes about to pop out of their sockets, Gadon cursed Robles’ mother again and again and even suggested that Robles engage in bestiality with a dog. His ranting could be straight out of a movie remake of “The Exorcist” Philippine-style. The venom was dripping out of his mouth. Warning to viewers: His rant could induce vomiting.

I wonder if his presidential bet countenanced such a defense, because Marcos Jr. has a lawyer and spokesperson to speak for him. I don’t think Gadon’s rant helped his candidate at all, but it could fuel a suspicion that there might be more like him waiting in the wings for their day in the limelight. I expect Gadon’s presidential bet to tell him, “You didn’t have to do it that way.” Oh, well…

When I read troll-like comments in social media, I can sense the mocking tone directed at decent language used in promoting one’s candidate, that it is put on and sanctimonious. So, the dirtier, the better? Raring for a fight, these paid trolls starve when ignored. Starving a troll is the way to go. But Gadon, on his own or not, was openly salivating for a fight.

“The profanity, expletives and sexist insults against Robles violate Philippine laws on public decency, gender respect and the core principles of the Integrated Bar of the Philippines (IBP). It was utterly despicable, and reflective of the belligerent impunity independent and courageous Filipino journalists face for doing their constitutionally protected work in the country.

“Gadon, who is a prominent backer of Ferdinand ‘Bongbong’ Marcos Jr., was furious over Robles’ remarks on social media. She stated in a tweet that the failure of the son of the late Philippine dictator to file income tax returns in the past raises the question of whether he paid the taxes at all—a clearly logical assertion.

“Like all Filipinos, Gadon has the right to challenge statements from journalists in the interest of public discourse, but never with such venom and malice that openly flout civility, respect and human rights which are protected by the country’s laws.

“This is not the first time Gadon has displayed the kind of behavior and speech, that is in every sense an attack not only on Raissa and other journalists but all decent, God-fearing and law-abiding Filipinos.

“We call on the Supreme Court and the IBP to discipline this wayward member of the bar for his boorishness and clearly unbecoming conduct. It is truly unfortunate that social media sites could be wantonly used as a platform to attack independent journalists in this gruesome manner.

“We welcome criticism but we will never countenance such atrocious and beastly behavior.

“FOCAP was founded during the dark days of martial law in 1974 to safeguard press freedom. The threats have never ceased but we will never flinch or cower.”