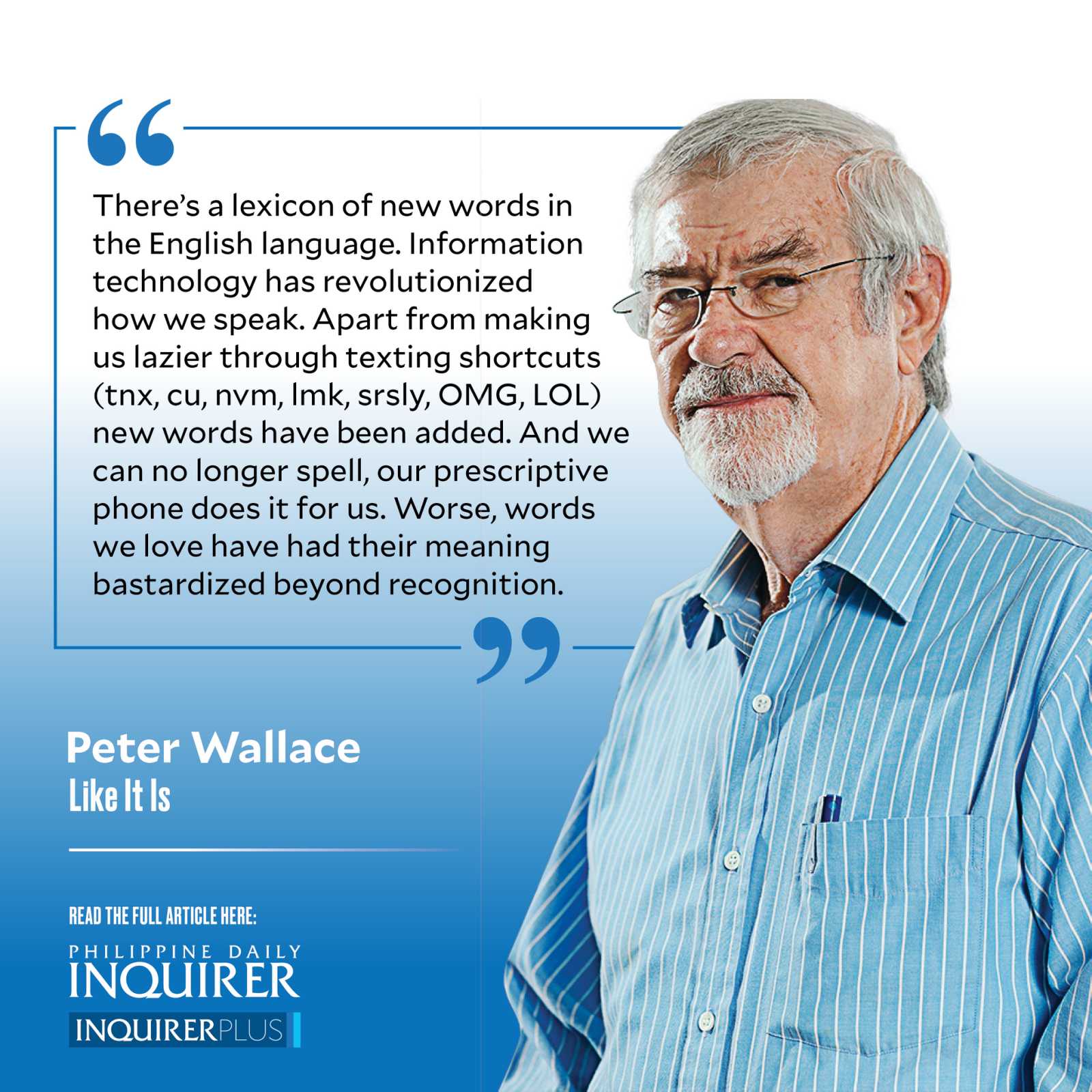 There’s a lexicon of new words in the English language. Information technology has revolutionized how we speak. Apart from making us lazier through texting shortcuts (tnx, cu, nvm, lmk, srsly, OMG, LOL) new words have been added. And we can no longer spell, our prescriptive phone does it for us. Worse, words we love have had their meaning bastardized beyond recognition.

LOL has, like “gay,” been captured. In my romantic youth, it was Lots of Love. Today it’s Laugh Out Loud. Where did love go? As to “gay,” Webster says it was “lively, bright, colorful, playful, merry.” Maybe gay people are, but aren’t we all?

ZOOM is what we young men hoped to do in our hotted-up cars. Somehow now it’s a meeting where nobody meets anybody.

WEBINAR and WEBEX are not what a strange, newly discovered spider creates, but words plucked from the clouds, and the Zoom for many people.

A CLOUD used to be a fluffy, white thing in a pale blue sky. Now it’s a heaven where data enjoys God’s blessings.

TELEGRAM: No, it doesn’t arrive at your doorstep by messenger any more. It’s some strange method of communicating by the young.

You also don’t mail anything today, you “e” or “g” it. When was the last time you had the anticipatory joy of opening a real letter on real paper?

METAVERSE: Not an ever so long, boring poem.

STREAMER: One of those lovely fluttery ribbons no more. Instead, it’s telling the world what a wonderful creative being you are.

FAKE NEWS: The truth shall set you free no more. We are captured.

INTERNET: Apparently not a net used in some new tennis-related game.

NETBOT: No, not yet another new ball game.

TEXT: What a good book contains—if you know what a book is.

EMOJI: The criminal theft of a delightful Japanese word.

PHISHING: More bad spelling, but maybe, too, a decorous avoidance of the “f” word.

SMISHING: Smashing. The youth of today really can’t spell, can they?

GROUFIE. Come on! Groufie? It’s a groupie where the “f” is not the word you think it is.

PHOTOBOMB: Apparently not a suicidal terrorist taking a “selfie” while he presses the button.

ZOOM BOMB: It’s not, as one would logically expect, the photobomb terrorist blowing himself and you up—virtually.

SOCIAL MEDIA: Journalists pretending to be friendly, no doubt.

YAHOO: Celebrating a success, with hands in the air. Now, it’s a way of making huge amounts of money for a company by handling conversations that used to be free when you actually faced someone.

There was a GOOGLY in my day, a term cricketers will well understand (but nobody else, look it up). GOOGLE is ubiquitous. You don’t actually look for anything anymore. You Google it. But it fails in the physical world (where I live); you can’t find the irreplaceable nut dropped on the floor by asking Google “where is the nut.” It may, instead, lead you to a politician.

CYBERSECURITY: Cyber is of the computer age. Almost anything related to computers applies—cyberbully, cybercrime, cybersmart, even cybersex.

MALWARE: All the things you don’t want in a hardware store.

BLOCKCHAIN: A geared machine for raising heavy loads, with the words reversed.

FINTECH: A technician from Finland, obviously.

TWITTER: The wondrous sound of a bird no more.

TIKTOK: The sound of a clock, if you listen carefully.

FACEBOOK: I’ve faced many books in life—and actually read them. Now is it books facing each other?

SKYPE: A misspelling of “skye”? Or perhaps a small long-haired terrier from the beautiful Scottish island of Skye.

APPS: A newly discovered shortening of APPLICATIONS that used to be something you filled in to try and get a job.

Then there’s APPLE and BLACKBERRY. In the simple days of old they were but fruits that were much healthier than what they are today—except for their owners.

COOKIES: No more those sugary things in a kitchen jar to steal when mom isn’t looking.

BLOG: Derived, I’m told, from WEB LOG. Well, spiders and forests we know, but a BLOG?

LINKEDIN: Is it a Welsh town, perhaps?

Enjoy Christmas with your family! Have a merry (or has that word been stolen, too?) one.