Drowned out by the distressing news about Supertyphoon “Odette” was the consequential revelation last week that PNOC Exploration Corp. (PNOC-EC) had made an about-face and was now withholding its consent to the sale of Shell Philippines Exploration B.V.’s (SPEx) 45-percent stake in the offshore Malampaya gas-to-power project to a unit of Udenna Corp.

“As of Dec. 13 2021, PNOC-EC has officially communicated to SPEx that PNOC-EC is withholding its consent to the transaction,” PNOC-EC president and chief executive officer Rozzano D. Briguez disclosed during the Dec. 15 hearing of the Senate committee on energy.

The PNOC-EC’s surprise move effectively put in limbo the plan of the Udenna group to take a combined 90-percent share in the key Malampaya project, considered the “crown jewel” of the country’s energy infrastructure.

Shell had signed in May an agreement to sell its 45-percent stake in Malampaya to Udenna unit Malampaya Energy XP Pte Ltd. for a base price of $380 million. Udenna had previously secured the 45-percent share of a subsidiary of Chevron Philippines in October 2019.

The Udenna group’s moves sparked controversy due to its questioned legal, technical, and financial qualifications to take over the asset referred to as the “backbone” of the country’s energy mix, accounting for 30 percent of the country’s total power capacity. Further raising eyebrows: The conglomerate is headed by Dennis Uy, a friend of President Duterte and one of his largest campaign donors in 2016.

The PNOC-EC, a unit of state-owned Philippine National Oil Co., has a 10-percent stake in the Malampaya project and thus the right to match offers to buy the shares of its partners.

Energy Secretary Alfonso Cusi had overseen the Malampaya deal and approved the earlier decision of the PNOC-EC to not match the offer to buy Chevron’s shares, for which he is facing graft complaints before the Office of the Ombudsman. Just last July, Briguez informed the Senate energy committee chaired by Sen. Sherwin Gatchalian that the PNOC-EC was waiving its right to match the offer to buy SPEx’s shares, because the government supposedly did not have enough funds and there were legal constraints that could affect Malampaya’s operations.

Now it has changed its tune. But as to why, Briguez begged off from disclosing the reason. Not even Shell was informed of the basis for the decision. “Without the consent from PNOC-EC, we will not be able to proceed with completion,” said SPEx managing counsel Kiril Caral. “However, we will continue to engage with them to find out if there is anything we can do to address the concerns that might have led them to this decision.” 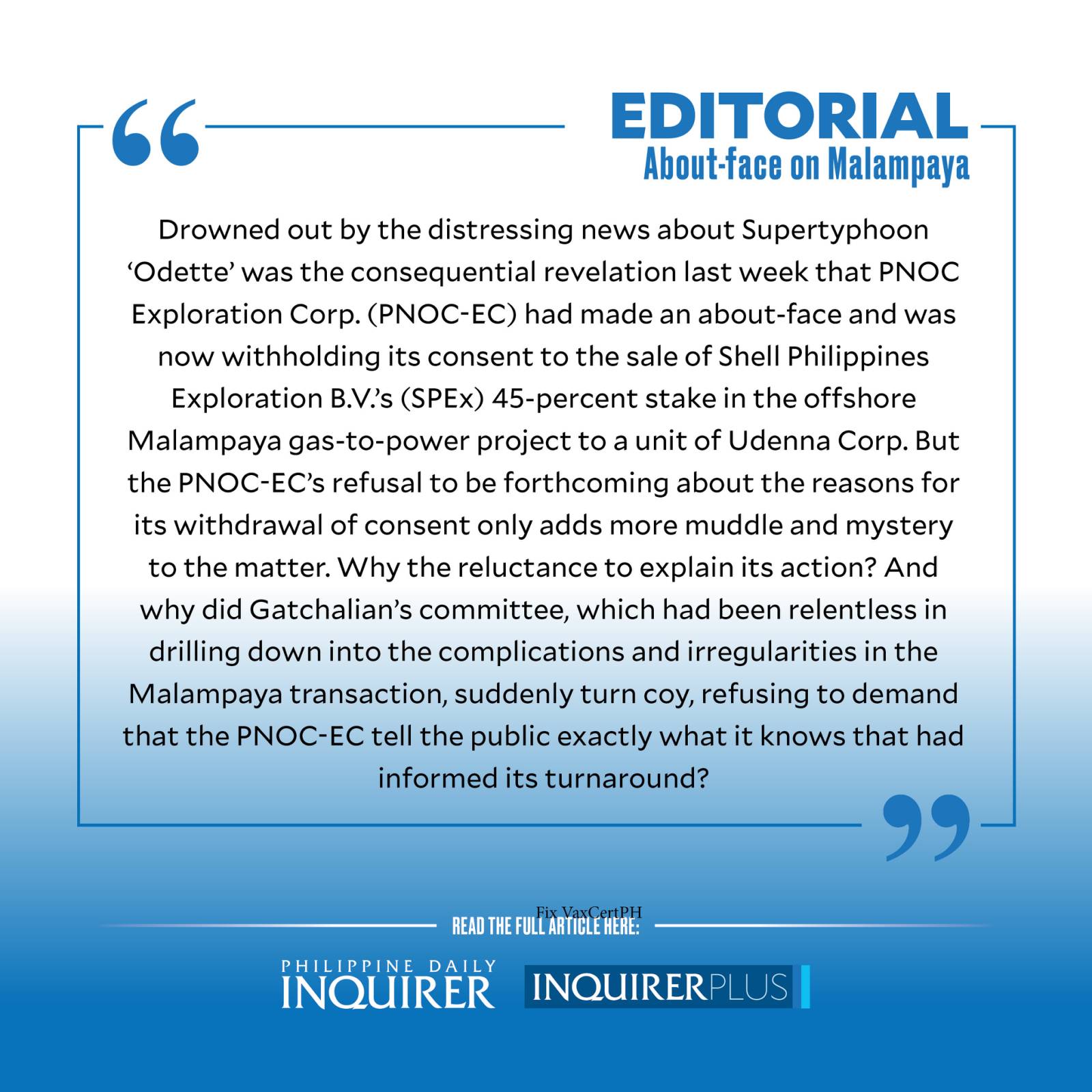 Gatchalian, a critic of the Malampaya deal, commended the PNOC-EC for withholding its consent; it “clearly shows that the company put first the interest of the Filipinos and the generations to come,” he said. “Whatever their reasons … we can now be assured that the chances of having one of the country’s most important national assets being under the control of a seeming unqualified company has dwindled, if not, already nil in possibility.”

The PNOC-EC’s move may indeed be welcome, given the critical public-interest issues that continue to be left unaddressed by this mammoth deal. But the company’s refusal to be forthcoming about the reasons for its withdrawal of consent only adds more muddle and mystery to the matter. Why the reluctance to explain its action? And why did Gatchalian’s committee, which had been relentless in drilling down into the complications and irregularities in the Malampaya transaction, suddenly turn coy, refusing to demand that the PNOC-EC tell the public exactly what it knows that had informed its turnaround and suggesting an executive session instead for such disclosure?

That detour into secrecy will not do; the same subterfuge and lack of transparency are precisely what had marked out Cusi’s deal as deeply problematic. Considering the far-reaching consequences to not just Shell and the PNOC-EC but to the nation itself, it is not enough that only a privileged few are allowed to scrutinize the intricacies of this transaction, or demand answers to unresolved questions. Will the PNOC-EC, for one, now exercise its right to match the sale offer and buy the shares itself? And were its chief concerns related in fact to Malampaya’s control ending up with the Udenna group—a deal that retired Supreme Court Senior Associate Justice Antonio Carpio has described as the “biggest presidential gift to a crony”?

And where in all of these is Cusi, whose response to the controversy has been to unleash a barrage of libel suits against journalists and media outfits who merely reported on the graft complaints filed against him? What becomes of his pet project—and what should be his liability for it—in the wake of the PNOC-EC’s repudiation of the Malampaya deal?