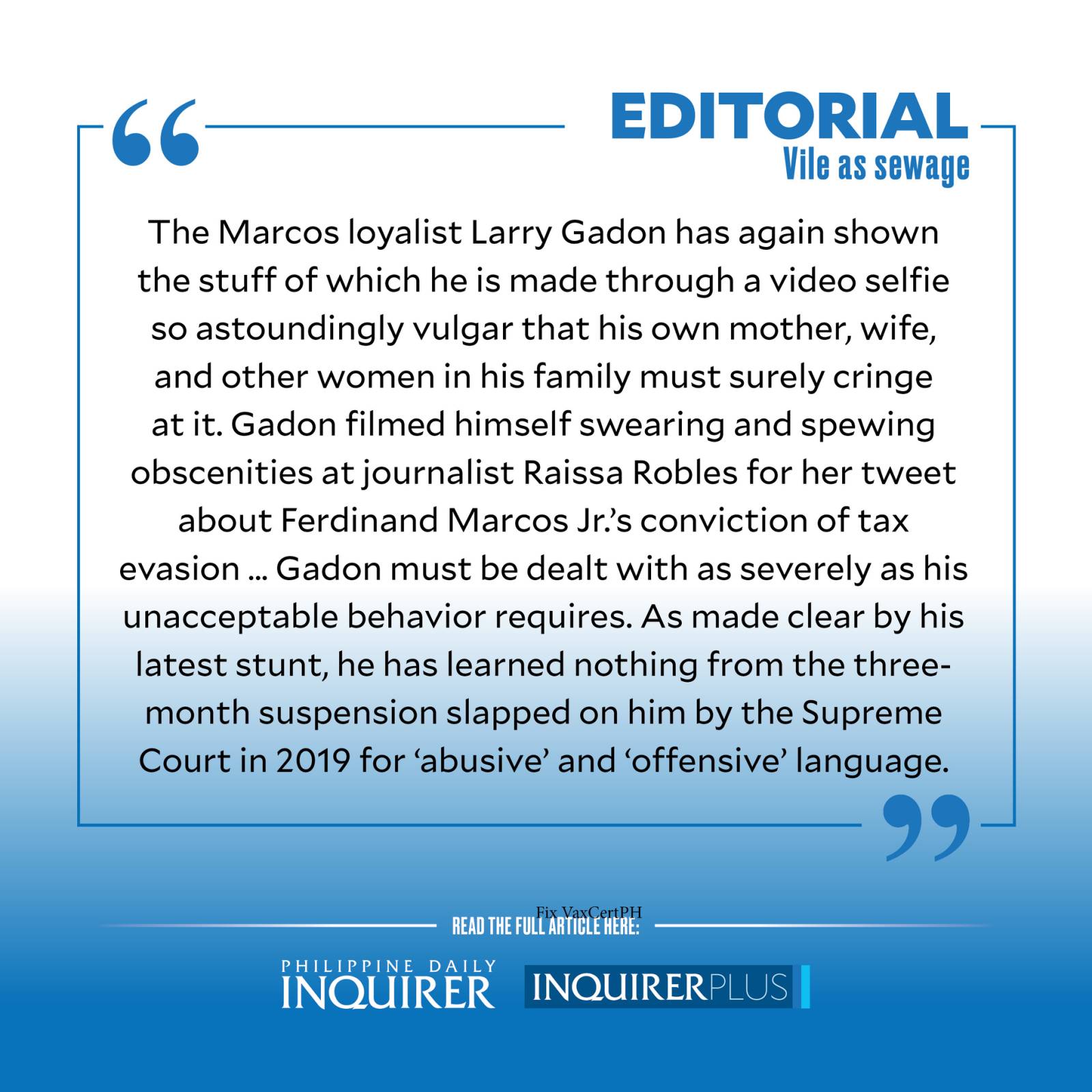 The Marcos loyalist Larry Gadon has again shown the stuff of which he is made through a video selfie so astoundingly vulgar that his own mother, wife, and other women in his family must surely cringe at it. They have every reason to be abashed and humiliated. Gadon filmed himself swearing and spewing obscenities at journalist Raissa Robles for her tweet about Ferdinand Marcos Jr.’s conviction of tax evasion, and the vile closeup video has spread online like sewage. It must be his idea of a campaign video for his third stab at a Senate seat, which shows exactly what he thinks of voters.

Gadon must be dealt with as severely as his unacceptable behavior requires. Being an officer of the court by virtue of his being a lawyer, he is expected to comport himself in the manner of one who has an “obligation to promote justice and uphold the law.” As made clear by his latest stunt, he has learned nothing from the three-month suspension slapped on him by the Supreme Court in 2019 for “abusive” and “offensive” language. Surely a heavier penalty is fitting for a repeat offender.

No rebuke has yet been heard from the presidential candidate Marcos Jr., as though indicating that he is quite fine with the idea that an unrepentant and unreconstructed foulmouth is part of his senatorial slate, which, according to his “manang,” Sen. Imee Marcos, certain candidates are dying—“Nagpapakamatay”—to get into. Surely she is indignant that such a specimen of manly virulence is riding on the coattails of the late dictator’s son and namesake. But then maybe not. Her own silence suggests an absence of discomfort over the man’s shameful notoriety.

Gadon’s bad rep is immortalized in, among others, a television interview during the 2016 election campaign in which he claimed that the “only solution” to the continuing conflict in Mindanao was to bring in the troops and kill every man, woman, and child in a purposeful effort to wipe the race off the face of the earth. “Burahin ang lahi” was the phrase he used to preclude any possibility of misinterpretation and to drive his point home. That no wholesale condemnation met his straight-faced declaration, leaving him free to once more mount an election campaign, remains a point for bewilderment—unless the general public has become so accustomed to verbal violence as well as “jokes” and “hyperbole” in official communications that it now fails to recognize reprehensible language or behavior when they hear or see it.

The rights group Karapatan has called for Gadon’s disbarment for his verbal assault on Robles, a correspondent of the South China Morning Post. (A petition for his disbarment—for claiming that former president Benigno Aquino III died of HIV—is reportedly pending.) Karapatan correctly painted the general picture when it said that Gadon’s assault on Robles and the recent cyberattacks on online news sites Rappler and Vera Files “portray the increasingly hostile and violent online environment threatening press freedom on all fronts in the country, on top of the deadly challenges and threats and the culture of impunity that [journalists] face on the ground for their work.”

Robles’ tweet on Marcos Jr.’s tax conviction is the subject of a number of petitions filed at the Commission on Elections against his presidential candidacy. While Gadon is within bounds to question Robles’ tweet, he cannot be so privileged, so above the law, as to do so in a manner that so grossly insults her and violates not only her rights but also public sensibilities.

It is thus of utmost importance that Gadon be called out loudly and forcefully, and that the Supreme Court and the Integrated Bar of the Philippines mete out the highest sanctions for his “atrocious, beastly behavior,” as the Foreign Correspondents Association of the Philippines has correctly termed it. He has imposed himself and his objectionable views and actions on the public consciousness in many instances, including when, in April 2018, he in effect admitted to the House of Representatives committee on justice that mere hearsay was the basis for then Chief Justice Maria Lourdes Sereno’s alleged acts of favoritism and manipulation, as contained in the impeachment complaint that he had filed against her. (Inexplicably, the committee members let his admission pass.) Or when he flipped the finger at Sereno supporters.

Gadon and his ilk make it their style to shock and awe, banking on the civility of others to not match vileness with more of the same. It would be folly to let them get away with it. They are a clear and present danger to a civilized and just society.