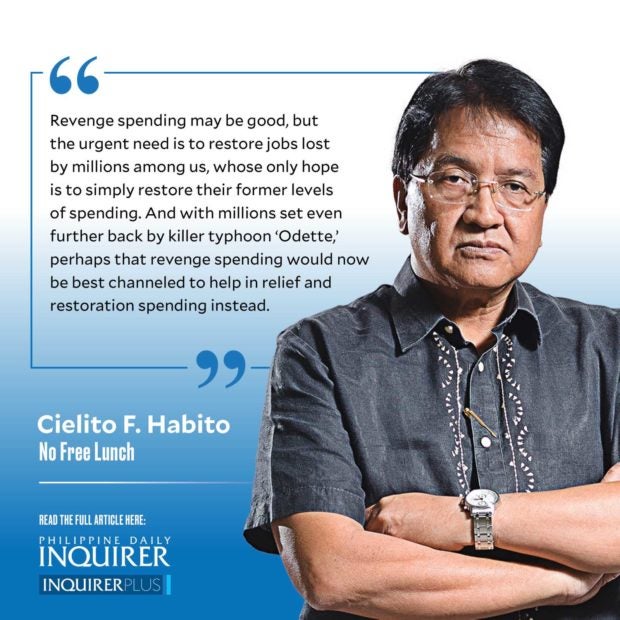 Pundits are citing “revenge spending” (also “revenge shopping”) as a likely booster of economic activity in the final quarter of this year and in the year ahead. The term is said to have first emerged in China after it eased lockdowns in early 2020, and luxury goods saw a great surge in demand. Within the first day of its reopening from the pandemic lockdown, the Hermès flagship boutique in Guangzhou reportedly sold $2.7 million (19 million renminbi) worth of merchandise, in what was seen to be the largest one-day tally for a single boutique in China.

Revenge shopping is not really a new phenomenon, notes Björn Ström in a July online article in Ombori Grid. “Customers have long been known to seek out specific goods or services that they had to stop receiving for a time after they are available again. They have also been known to engage in impulse purchasing after periods of deprivation as well.” But he notes that the COVID-19 pandemic has made the phenomenon happen at a much wider scale. Practically everywhere, consumers had to limit their purchases to necessities, because stores selling non-essential items or services remained closed for long periods, and because people suffered reduced incomes from loss of jobs.

The psychology of revenge shopping is easy enough to understand. Experts explain it as a natural reaction to the end of prolonged deprivation. Ström notes that part of it may be the pent-up desire to “see and be seen” after long periods of home isolation. In the case of leisure travel for those who can afford it, indications of “revenge travel” by domestic tourists seem evident. Operators of resorts in Boracay and Palawan have been reporting increased bookings, especially with the lifting of the RT-PCR test requirement for fully vaccinated individuals. I visited one of Manila’s higher-end hotels recently, and noted that the volume of locals in the lobby and restaurants was nearly the same as pre-pandemic levels.

As for automobile purchases, sales of brand new vehicles jumped to 205,078 units as of the first nine months of this year, from 162,595 in the same period last year. While commercial vehicles account for the bigger part of total sales, these reportedly grew only 0.3 percent in October from the previous month, whereas passenger cars surged 34 percent. Analysts are expecting growth to further accelerate into next year as global value chains for vehicles adjust to pent-up demands in most markets. And being a provinciano cooped up at home for most of the past 18 months, I’ve also noted that traffic congestion into, within, and out of Metro Manila has practically gotten back to what it was like before.

But much of the revenge spending I’ve described applies mainly to those lucky enough to have the purchasing power to support it to begin with. But is that spending lifting up the overall economy enough, knowing that large numbers of Filipinos suffered reduced incomes in the wake of the pandemic, and for whom a return to pre-pandemic income levels remains a prayer? One might find clues from the household final consumption expenditures data that the Philippine Statistics Authority reports every quarter along with the GDP accounts. Considering the third quarter (Q3) of 2019 as a “normal” period, recreation and culture accounted for 1.8 percent of total household spending then. That share was just half (0.9 percent) last year, and as of Q3 this year, still barely up at 1.0 percent. Spending on transport was 11.2 percent of total in Q3-2019, was at 8.3 percent in Q3-2020, and is still only 9.0 percent in Q3-2021. And spending on restaurants and hotels, at 5.5 percent of total in Q3-2021, remains barely over half the Q3-2019 share of 10 percent. Clearly, we need far more than the revenge spending we’re seeing to heal the deep scars COVID-19 has brought.

Revenge spending may be good, but the urgent need is to restore jobs lost by millions among us, whose only hope is to simply restore their former levels of spending. And with millions set even further back by killer typhoon “Odette,” perhaps that revenge spending would now be best channeled to help in relief and restoration spending instead.