Why aren’t we having runoff elections? 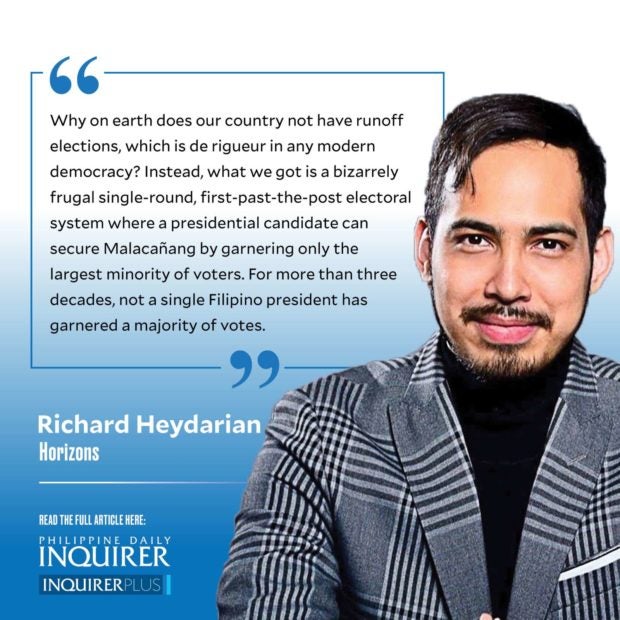 Over the weekend, Chile elected its youngest president yet. The left-leaning Gabriel Boric, 35, managed to garner close to 56 percent of total votes, comfortably edging out his Trump-like opponent, Jose Antonio Kast, who trailed with only 44 percent of the votes.

Santiago and other major Chilean cities greeted the news with ecstatic joy, as the world’s newest millennial president celebrated “this historical moment” in the “eyes of Chile and the world.” The shaggy-haired Boric promised to make his country more just and equitable by overhauling the country’s heavily privatized economy, empowering marginalized groups through proactive state policy, and enlisting a new generation of leaders to his administration.

Had either of these two Latin American countries been saddled with a system similar to what the Philippines has, they would have fallen under the grip of right-wing candidates who have glorified and benefited from past dictatorships.

In Chile, the winner of the first round of the presidential elections was actually Kast, the far-right presidential candidate who has praised the legacy of former brutal dictator Augusto Pinochet. A top US official once described Pinochet, who came to power after a bloody coup, as “the toughest nut I’ve ever seen.” Throughout his decade of rule, Pinochet oversaw pro-market reforms with an iron fist, ruthlessly brutalizing Chile’s liberal opposition and progressive activists in the name of discipline and prosperity.

Kast, a lawyer by training, burst into public consciousness by tapping into the “authoritarian nostalgia” and simmering anxieties of upper-class Chileans, who bemoaned the massive protests that had rocked the country in 2019 amid the surging cost of living and deepening inequality. He also appealed to rural voters by appealing to their conservative instincts against the more progressive middle class in major urban centers. The media-savvy Kast utilized Tiktok and major social media platforms to appeal to younger voters.

In the runoff elections, however, Kast struggled to win over the majority of voters who were far more attracted to Boric’s message of social justice, democratic reform, and forward-looking politics. To secure alliances with more centrist and liberal parties and win over median voters, Boric also toned down some of his more radical platforms. This proved a winning formula both for his campaign as well as for Chilean democracy.

And this begs the question: Why on earth does our country not have runoff elections, which is de rigueur in any modern democracy? Instead, what we got is a bizarrely frugal single-round, first-past-the-post electoral system where a presidential candidate can secure Malacañang by garnering only the largest minority of voters. For more than three decades, not a single Filipino president has garnered a majority of votes.

Notwithstanding post-electoral “presidential bandwagoning,” best exemplified by the unabashed opportunism of our overnight party-switching politicos, the absence of runoff elections is inimical to our democracy on three levels.

In principle, it means that none of our contemporary presidents have truly enjoyed a majority mandate, thus the subsequent excessive focus on patronage politics, popularity ratings, and performative governance among a good number of Filipino leaders.

Second, it means that a vast majority of Filipino voters often don’t get to choose the men and women who would come to shape their political destinies for the next six years, if not more. In practice, the absence of runoff elections incentivizes candidates to adopt increasingly polarizing rhetoric as well as preposterously puerile policy positions in order to build the most “solid” base of support.

The upshot of this race-to-the-bottom electoral dynamic is an in-built bias against more sober and “centrist” candidates who tend to fail to inspire a similar passion among a significant section of the voters. Single-round elections can increasingly turn into a vlogger-style popularity contest, whereby the loudest candidates and most ridiculous platforms can secure the greatest possible electoral engagement.

Finally, the brilliance of runoff elections is that it encourages coalition-building among similarly-minded parties, and pressures candidates to adopt more practicable and less polarizing policy positions. It’s high time we revisit the way we elect our democratic leaders.