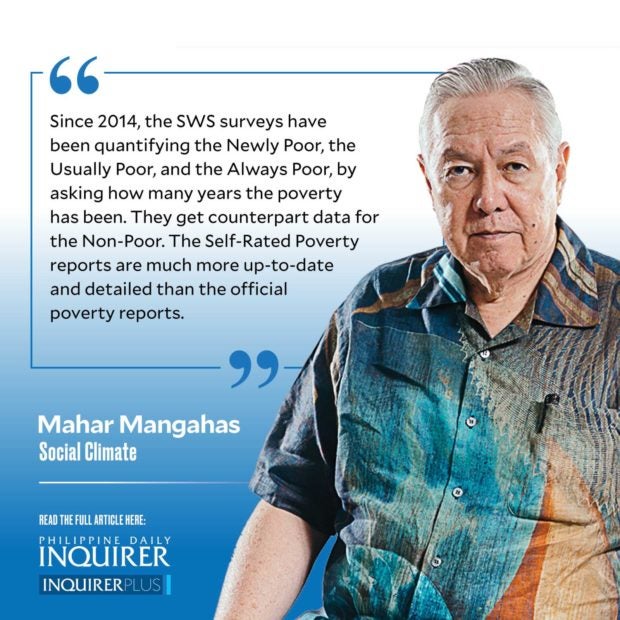 Poverty is one of several aspects of human well-being that Social Weather Stations is committed to monitoring regularly, through nationally representative multi-topic surveys, as a general public service.

A typical SWS survey involves a lengthy, yet manageable, interview. We are very grateful for the people’s hospitality toward our fieldworkers. Actually, many respondents are pleased at their good fortune on being drawn for the sample, thereby representing the nation on many issues, not just SRP.

Words used for Self-Rated Poor. The survey interviewer marks the family as Poor, Not Poor, or Borderline, depending on the household head’s choice from a card saying Mahirap on one end and its negative, Hindi Mahirap, on the opposite end, separated by a line. In non-Tagalog areas, the card uses Pobre (Bikol, Cebuano, Waray, Chavacano), Marigrigat (Iluko), Imol (Hiligaynon), Miskinan (Maguindanaon), Kareregenan (Maranao), Miskin (Tausug), etc.

A questionnaire is bilingual in the local language and Tagalog. Interviewers follow it strictly. They may not read the card orally or comment on it. If asked what the card means, they should reply, “Whatever it means to you.”

Experience shows that many people identify themselves with the Borderline—see “Third Quarter 2021 Social Weather Survey: 45% of Filipino families feel Poor; 34% feel Borderline Poor, 21% feel Not Poor,” www.sws.org.ph, 11/27/2021. This is grassroots evidence of a continuum from Poor to Not Poor, rather than a sharp division between the two. The report of 45 percent Poor does not mean that 55 percent were “safe”; actually, only one-fifth were Not Poor.

The Poor define their own Poverty Thresholds. The Self-Rated Poverty Threshold (SRPT) is the minimum budget for home expenses that a Poor household head says it needs in order not to be Poor. Its relation to family size is realistically non-linear—a family of six does not really need twice as much as a family of three (unlike in the official poverty line system).

Instead of the government defining who is poor, the SRP system lets the Poor define the depth of their poverty. The Philippine median SRPT in September 2021 was P15,000 per month for home expenses (i.e., excluding transportation to work and other work-related expenses).

The median SRPT in the National Capital Region was P20,000 per month—obviously due to its high cost of living. For the Poor elsewhere, the medians were P15,000 in both Balance Luzon and Visayas, and P10,000 in Mindanao. These thresholds are rarely reported in the mass media—for fear of offending economic planners and the business sector? Yet they are not exorbitant, and are very useful as wage guidelines attuned to reality.

The Poor suffer from large Poverty Gaps. Self-Rated Poverty Gaps—monitored quarterly since 2010—are what Poor households say they lack compared to their needs. For the Philippines, the median Threshold stayed at P15,000 per month from June to September, but the median Gap rose from P6,000 in June to P7,000 in September—thus the Poor got fewer, but their deprivation got deeper.

SRFP is always less than general SRP. Like SRP, SRFP also fell slightly from June to September. The ratio of the Food Threshold to the Total Threshold varies over time, unlike in the official poverty line system, which sets a food poverty line first, and then assumes it to be 70 percent of the total poverty line.

Transition into/out of poverty is also self-reported. Since 2014, the SWS surveys have been quantifying the Newly Poor, the Usually Poor, and the Always Poor, by asking how many years the poverty has been. They get counterpart data for the Non-Poor. The SRP reports are much more up-to-date and detailed than the official poverty reports.