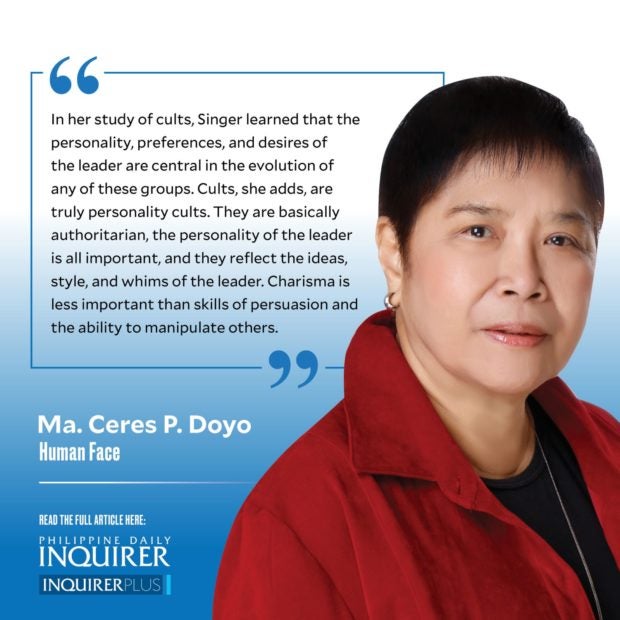 Currently in the news is the spiritual mentor of President Duterte, self-proclaimed “appointed son of God” Pastor Apollo Quiboloy, founder of the Kingdom of Jesus Christ. He is facing criminal charges in the US, namely, “conspiracy to engage in sex trafficking by force, fraud and coercion, sex trafficking of children, marriage fraud, fraud and misuse of visas, bulk cash smuggling, promotional money laundering, concealment money laundering, and international promotional money laundering,“ according to Rappler’s three-part series about Quiboloy’s kingdom, how it amassed wealth, and the testimonies of former members.

Many years ago I wrote a couple of column pieces on cults. That was when the Philippine Benevolent Missionaries Association (PBMA) led by Ruben Ecleo Jr., son of the PBMA founder Ruben Sr. and Rep. Glenda Ecleo of Surigao, was in the news. The PBMA was a classic example of a homegrown cult gone troubled. It had long been around and been featured many times in the media.

I had always wondered when it would explode/implode. It did finally in 2002 with so many dead bodies strewn about and the divine master/rock guitarist/suspected wife killer/drug user was thrown in jail for parricide, et cetera.

Who are drawn to these type of leaders? Seekers they all are, seekers of spiritual experience and enlightenment, an alternative lifestyle, a godly existence and, most of all, someone to lead them to the promised land. Many give up all their belongings in order to belong. They are also drawn to the vast physical oases manicured to look like the paradise of their dreams.

Many end up hooked and losing everything — not only their worldly goods but also their independence, their will, their common sense. They are hooked on someone they think is God or the incarnation of God who will lead them to paradise. This someone can do no wrong. His or her foibles and failings are dismissed as “divine naughtiness.” A fleet of Rolls Royces, in the case of one swami, is divine naughtiness? And in the case of Quiboloy, a paradise kingdom on a hill, private aircraft, music galore, travels, and a bevy of attractive women singing around him, to name a few.

What is a cult? The book “Cults in our Midst: The Hidden Menace in Our Everyday Lives” by Margaret Thaler Singer (in collaboration with Janja Lalich) is a great sourcebook on the psychology and sociology of cults. It is a result of Singer’s more than 50 years of work and research as a psychologist. Singer has counseled and interviewed more than 3,000 ex-cult members. Lalich was a former cult member who is now a cult information specialist.

Cults, Singer says, range from the relatively benign to those that exercise extraordinary control over members’ lives and use thought-reform processes to influence and control members. The term cult is not in itself pejorative but descriptive. It refers to a group that forms around a person who claims he or she has a special mission or knowledge, which will be shared with those who turn over most of their decision-making to that self-appointed leader.

In her study of cults, Singer learned that the personality, preferences, and desires of the leader are central in the evolution of any of these groups. Cults, she adds, are truly personality cults. They are basically authoritarian, the personality of the leader is all-important, and they reflect the ideas, style, and whims of the leader. Charisma is less important than skills of persuasion and the ability to manipulate others.

Cult leadership can be a heady role especially if the leader realizes the control he or she holds.

But, Singer stresses, her book is not about weird people who join crazy groups. “It’s about how all of us, at various times, can fall into vulnerable states during which another person can wield more influence over us than at other times. We are all more vulnerable to flattery, deception, lures and enticements when we are lonely, sad and feeling needy.”

Even the famous, wealthy, and educated, the so-called most unlikely, get drawn in. A number of Filipinos swore by Bhagwan Shree Rajneesh, that “free-love” Indian guru who established a huge empire in the US and was later hounded by the tax police. There was infighting, a power struggle, and allegations of sexual abuse. The scandal landed in the media. Netflix has a documentary series (“Wild Wild Country”) on him and his ashram that drew so many gullible Americans.

In Philippine politics, too, can be found cult-like followings that thrive on instant gratification and rumors of gold bars — to borrow a quote — “shining like rotting mackerel in the moonlight. “