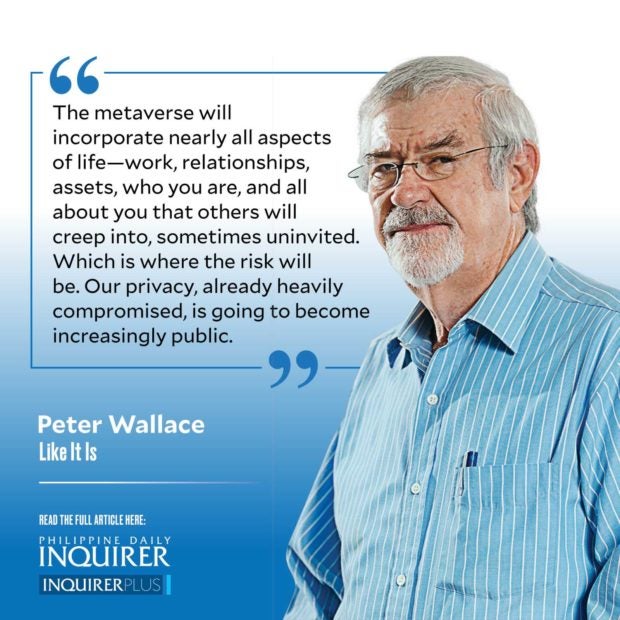 No, not an overly long, boring poem, but a new world we’re entering.

Many of you have donned those strange-looking goggles that take you into a virtual world where you almost feel like you could reach out and touch what you see.

Well, more of that is coming. The distinction between the physical world and the virtual is fading. You’ve witnessed the revolution from paper to touchscreen in but a matter of a few decades. With Moore’s law (technical change doubling every two years) in full force, that miracle is going to be overshadowed in the next few years.

It’s called metaverse — an all-encompassing virtual universe existing alongside, and mingling with, the physical one. It’s immersive virtual reality where you can be present in what will seem like an actual, real experience. A small example: You’ll be able to enter a shop and try on clothes, and if they fit, then you buy them through blockchain. Nike, the sportswear manufacturing firm, is reportedly already planning to sell virtual clothing and shoes in the online world in this manner.

The zoom and webinar meetings we attend virtually today are an early rudimentary example of metaverse. We’re attending meetings, but we’re not really there, it’s a virtual us. Eventually, a more advanced version of holograms will put us in the room.

As the New York Times says, “Today, glimpses of the metaverse are everywhere. Virtual concerts attract record audiences; high-end designers sell virtual fashion; and gaming has become a livelihood for people around the world. Many of the closest corollaries to a full-fledged metaverse are immersive games like Fortnite, Minecraft and Roblox, where players can socialize, shop and attend events in a virtual world.”

The gaming industry is at the forefront of this convergence. Roblox and Fortnite are virtual worlds where millions of players gather together to play and socialize, where avatars that attend will give you a sense of the direct presence of the physical and virtual worlds—and where you can make money from them. Play-to-earn games enable players to earn and own digital assets that they can then sell for real-life physical money at their discretion. These games use blockchain technology through non-fungible tokens (NFTs) to create value.

Play-to-earn games have invaded the Philippines. It has become a means for Filipinos to earn extra income to pay for their bills and groceries during this pandemic. In fact, the Philippines accounts for the biggest number of daily active players worldwide of the play-to-earn game Axie Infinity, at around 40 percent. Axie Infinity is a game where players can trade, breed, and battle digital pets called Axies. By battling against other Axies, players earn Small Love Potions (SLPs) which they can then withdraw and exchange for real world, physical money. Some players are reportedly earning around P20,000 to P40,000 per month by playing this game everyday. Its earning potential, coupled with its accessibility — it can be played on the smartphone, tablet, or computer with an internet connection — has made it very appealing to Filipinos. This is an early example of the convergence that is occurring.

The metaverse will incorporate nearly all aspects of life — work, relationships, assets, who you are, and all about you that others will creep into, sometimes uninvited. Which is where the risk will be. Our privacy, already heavily compromised, is going to become increasingly public. So you’d better behave. Some countries are already using facial recognition technology to monitor the behavior of individuals.

In the early days, we’ll don a headset and create an avatar that will attend meetings for you, go shopping for you, play games with other avatars, actively join in movies for you so you become part of the story, etc. Eventually, the headset won’t be needed, or will be built into our glasses. It will all be in in-depth 3D. I see a greatly enhanced smartphone/computer being built into our bodies through nanotechnology diminution, and connected to our brain so we’ll be “holding hands” with someone a thousand miles away.

But there’s a huge risk to this utopian dream. Governments and tech giants can take your life from you. They can influence you in a good way, but more likely in intrusive ways. They can direct your thinking. Mark Zuckerberg is at the forefront of the growth of metaverse. He even changed the name of his company Facebook to Meta to capture the word for himself. And given his penchant for greed, and governments’ penchant for power, this does not spell well for how the metaverse will be used in the new future.

Whichever way it goes, it’s inevitable that we’re going to have to learn to live with it. So it behooves us to see to it that governments and tech giants act responsibly. We would need to put pressure on politicians if our children are not to end up pawns in a game.

TAGS: Like It Is, metaverse, Peter Wallace, Virtual Reality