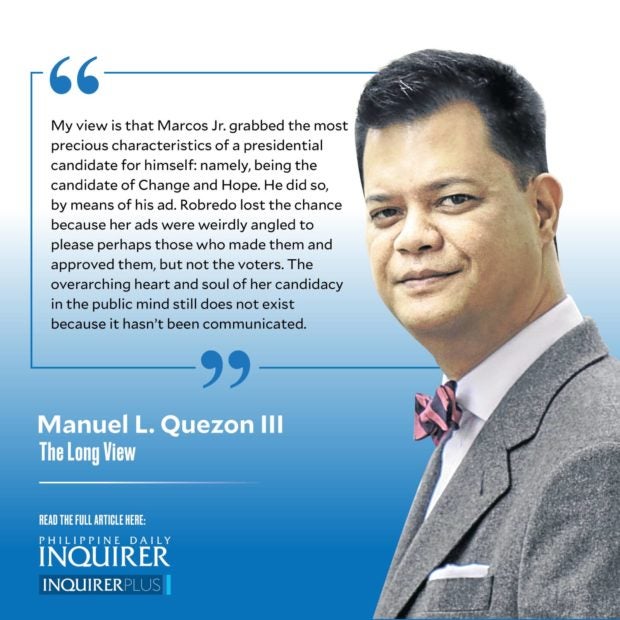 When Christopher Go finally, formally, bowed out of the presidential race, what was up for grabs? If the Laylo Report slides circulating online are to be believed, it’s the 9 percent of eligible voters who would have voted for him if elections had been held between Nov. 22 and 23. That’s what’s up for grabs. What’s interesting is that this number wasn’t at the expense of Ferdinand Marcos Jr., as you will see momentarily.

A brief recap is in order: Pedro Laylo Jr.’s surveys have long been considered credible, a useful counterpart to the two bluechip survey firms, Social Weather Stations (SWS) and Pulse Asia. His firm (established after he retired from SWS) has been commissioned in past election years by the Manila Standard and so understood by extension to reflect his usefulness to Enrique Razon Jr. (who needs the information for his own party and other purposes). What sets apart Laylo is that, generally, his sample size is twice as large as that of the two leading polling firms.

What isn’t speculation is that we have one snapshot each, courtesy of SWS and Pulse. Pulse is supposed to have finished its November polling but as of press time hadn’t released it yet; so these are the snapshots we have from the top two polling firms. Pulse Asia’s latest was Sept. 6-11. Prexy: 20 percent Duterte, 15 percent Marcos, 13 percent Moreno, 12 percent Pacquiao, 8 percent Robredo, 6 percent Lacson, 3 percent Go. Veep: 25 percent Sotto (the rest listed didn’t end up running). For its part, Stratbase ADR Institute commissioned SWS to conduct a poll from Oct. 20 to 23. Prexy: 47 percent Marcos, 18 percent Robredo, 13 percent Moreno, 9 percent Pacquiao, and 5 percent each for Lacson and Dela Rosa, with 3 percent undecided. Veep: 44 percent Sotto, 25 percent Duterte, 13 percent each for Pangilinan and Ong, 3 percent Atienza, 2 percent undecided.

Since comparing apples to apples is best, what would be safest would be to view all three surveys I’ve mentioned as starting snapshots. It’s in the surrounding activities that were meant to make the candidates gain support, that we can gauge which campaigns are on the right track. My view is that Marcos Jr. grabbed the most precious characteristics of a presidential candidate for himself: namely, being the candidate of Change and Hope. He did so, by means of his ad. All the rest: the highly-organized motorcades, the crushing prediction of an unstoppable landslide being promoted online, the explosion in anticipation of Tallano Gold and Bataan Nuclear Plant bonanzas for lucky supporters, flows from the candidate capturing the emotional and even moral high ground (Marcos Jr. has essentially been gagged, with no media appearances or extended video clips to contradict his imagery; thus, claims can be circulated without risk of the candidate disappointing the faithful).

Robredo lost the chance because her ads were weirdly angled to please perhaps those who made them and approved them, but not the voters. In a similar manner there was a ridiculous motherhood-oriented pitch that threatened to sink her campaign before it could even be launched, until wiser heads prevailed and “Let Leni Lead” moved up her numbers to make her a viable candidate. But wisdom proved temporary. Her first campaign salvo was beyond a flop. Her latest commercial is better: a friendly but firm, enumeration of her policies for labor. A perfect ad: for a senatorial candidate, since most campaign on only or at most only a few, issues to set them apart. But it is not a presidential commercial. The overarching heart and soul of her candidacy in the public mind still does not exist because it hasn’t been communicated.