Leni Robredo: A movement is born 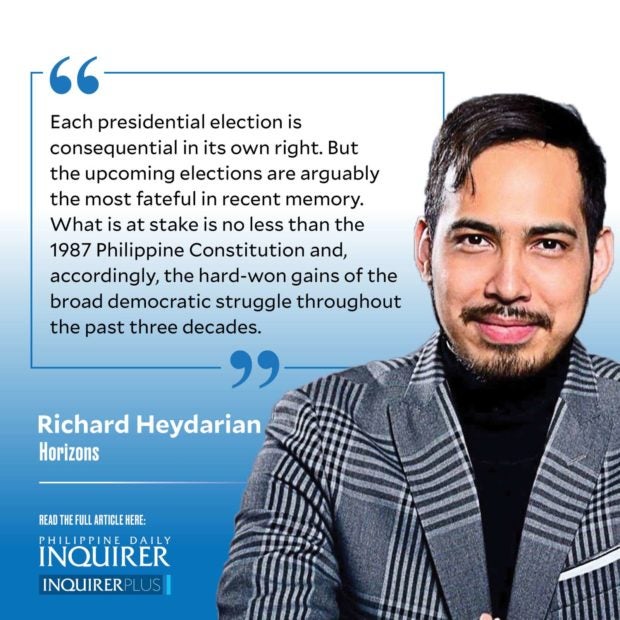 The Russian novelist Count Leo Tolstoy once advised that “Since corrupt people unite amongst themselves to constitute a force, then honest people must do the same.”

Tolstoy and other members of the Russian intelligentsia — Alexander Herzen, Ivan Turgenev, Mikhail Bakunin, Vissarion Belinsky, Nikolay Chernyshevsky, Fyodor Dostoevsky, many of them also hailing from aristocratic backgrounds — were deeply troubled by the desiccated foundations of the country’s tsardom and its scandalously deracinated elite. But, while the likes of Bakunin advocated for anarchist revolution, Tolstoy, similar to Dostoyevsky, emphasized a spiritual revolution among his followers.

All of them, however, agreed on the necessity of going beyond cyclical reforms or simple tinkering with an ossified system. They instead believed in the creation of a coherent and purposeful movement to upend an unjust and unsustainable status quo.

If one looks at today’s Philippines, the parallels with late-19th century decaying Russia are discernible. The country is bedeviled by a toxic cocktail of feudalistic inequality, systemic corruption, Kafkaesque state institutions, and a decadent political elite.

As the leader of the opposition, Vice President Maria Leonor “Leni” Robredo should oversee the creation of nothing less than a deep and enduring social movement that would advocate for transformative change before, during, and well beyond the May 2022 elections. Absent a robust grassroots movement for democratic reforms, the Philippine state will likely be fully hijacked by a well-organized political cartel.

Each presidential election is consequential in its own right. But the upcoming elections are arguably the most fateful in recent memory. What is at stake is no less than the 1987 Philippine Constitution and, accordingly, the hard-won gains of the broad democratic struggle throughout the past three decades.

So far, there are indications that the groundswell of support for Robredo is indeed congealing into a strong social movement for change. The VP’s base cuts across all socioeconomic classes and geographic divides, reflecting a nationwide yearning for competent, conscientious, and decent leadership.

Also, Robredo’s support base is interested not only in winning next year’s elections, but also in ensuring long-term and sustainable reforms. Her supporters have shown deepening appreciation for the need to institute decisive reforms that go beyond the usual perfunctory tinkering with our visibly corroded democratic institutions.

It goes without saying that Robredo will have to consolidate this trajectory. She needs to transform her electoral support base into a full-fledged social movement that would defend the vestiges of the fraying Philippine democracy and, accordingly, help restore the citizenry’s basic political and social-economic freedoms.

Moving forward, Robredo will have to take three important factors into consideration. The first one is the need to ensure that both her mobilization strategy as well as long-term political vision are inclusive: Rather than just relying on old liberal cliques, she will have to work with a broad coalition of intellectual reformers and inspirational progressives.

Second, her core supporters should supplant “cancel culture” and virtue signaling with a genuinely inspiring message, one that can attract less ideologically-oriented voters who simply want competent and decent leadership after years of populist bombast and shortcomings.

And finally, the Robredo campaign will have to find and nurture a “cool factor” in its political messaging that would help it find traction among media-savvy younger voters, while also emphasizing socioeconomic rights, which are a key platform for labor groups, farmers, and marginalized Filipinos.

For almost half-a-century, the Philippines has lingered in the shadow of the Marcoses. Not even the two Edsa “people power” revolutions managed to provide a decisive break from the toxic legacy of the dictatorship.

If current trendlines continue, the next administration would likely oversee constitutional change and, accordingly, full consolidation of a reactionary regime. What the Philippines confronts is the prospect of a century of Marcosian politics, where authoritarian nostalgia trumps democratic truth.

But as one of Tolstoy’s characters in “War and Peace” (1869) put it, “one must believe in the possibility of happiness in order to be happy.” The same principle applies to the possibility of democratic transformation, especially when a new and energized social movement is emerging.