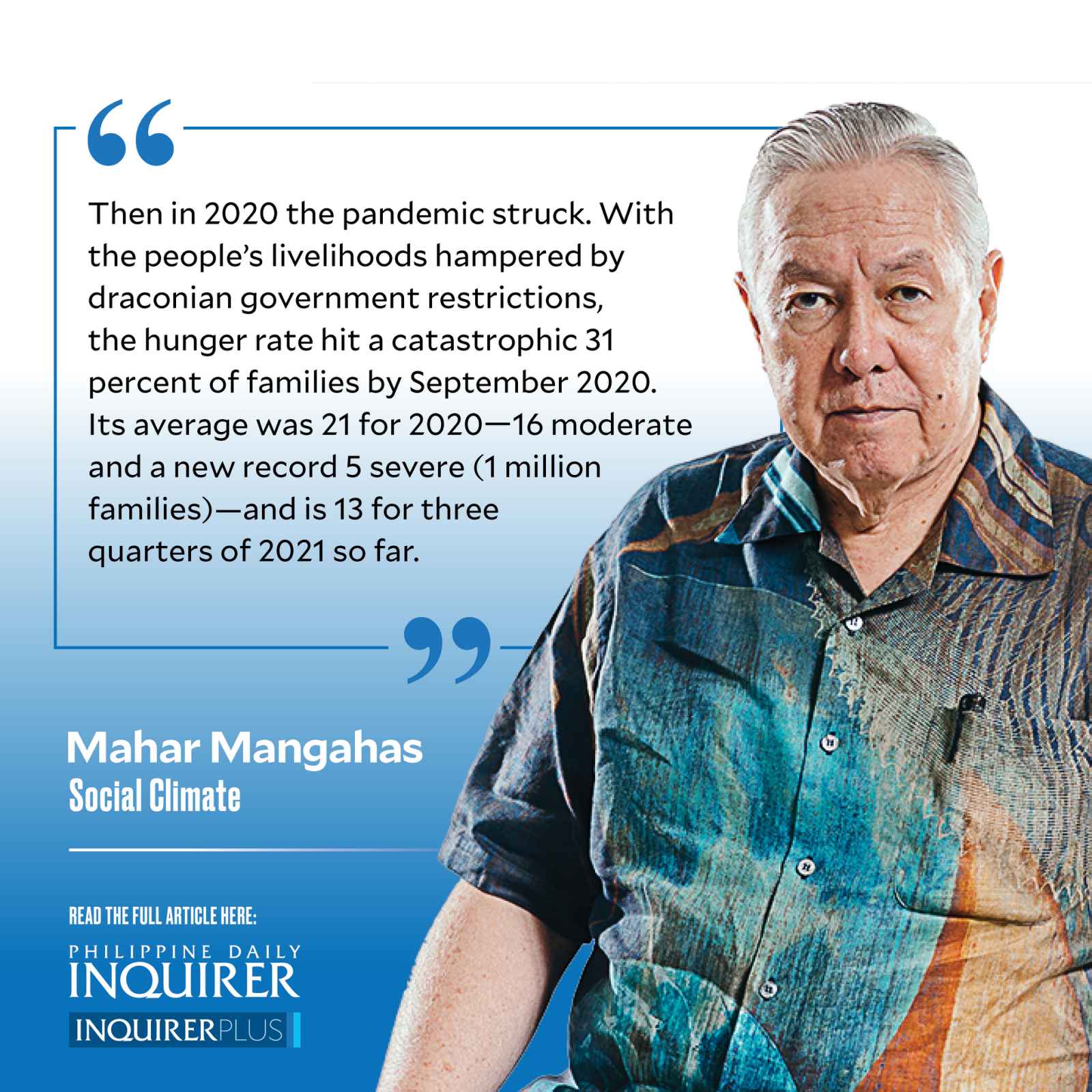 The inclusion of hunger in the SWS July 1998 survey had been inspired by news reports earlier that year of extensive hunger in Mindanao. Indeed, that survey found hunger seriously high in Mindanao (15.3 percent of families). It was less in Visayas (11.3 percent), and much less in the National Capital Region (6.1 percent) and Balance Luzon (5.1 percent). The national hunger rate was 8.9 percent in July 1998. From then on, hunger was on the SWS quarterly agenda.

Like Self-Rated Poverty, the survey question is addressed to the household head, representing the family; hence it indicates the family’s well-being rather than the respondent’s personal well-being. It asks whether the family has experienced hunger (nakaranas ng gutom) even once in the last three months, without having anything to eat (at wala kayong makain). The proviso makes clear that the hunger is not voluntary, as done for religious reasons in Lent and Ramadan, or due to deliberate dieting. The survey question has been carefully maintained, since the SWS surveys are meant for time-series analysis.

If hunger was experienced, a follow-up asks if it was only once, a few times, often, or always. The first two answers are considered moderate hunger, and the next two are considered severe hunger. Every new SWS hunger report has the full quarterly data since 1998, nationally and by area, broken down into moderate and severe, with percentages up to the first decimal point (here I will henceforth round them off to the nearest percentage point).

Throughout 2008-14, average hunger was 18+ percent. It was a Hump in Hunger: a crisis period in suffering, which officialdom did not experience and on which it did not collect statistics. In 2015, the hunger average was below 15, started falling, and reached 9 in 2019, a single digit again for the first time since 2003.

Then in 2020 the pandemic struck. With the people’s livelihoods hampered by draconian government restrictions, the hunger rate hit a catastrophic 31 percent of families by September 2020. Its average was 21 for 2020—16 moderate and a new record 5 severe (1 million families)—and is 13 for three quarters of 2021 so far.

The latest hunger percentage of September 2021 is highest in NCR (14), and lowest in Visayas (6). Several times in the past, NCR has had the worst hunger; hence the survey checks into home-produced food from time to time,

Hunger and poverty are related, but not in fixed proportions. Hunger is a specific deprivation that is experienced by both the poor and the non-poor (a category that includes the borderline poor), but to different extents.

The straightforward way to learn such facts is to do regular social surveys that measure poverty and hunger at the same time.