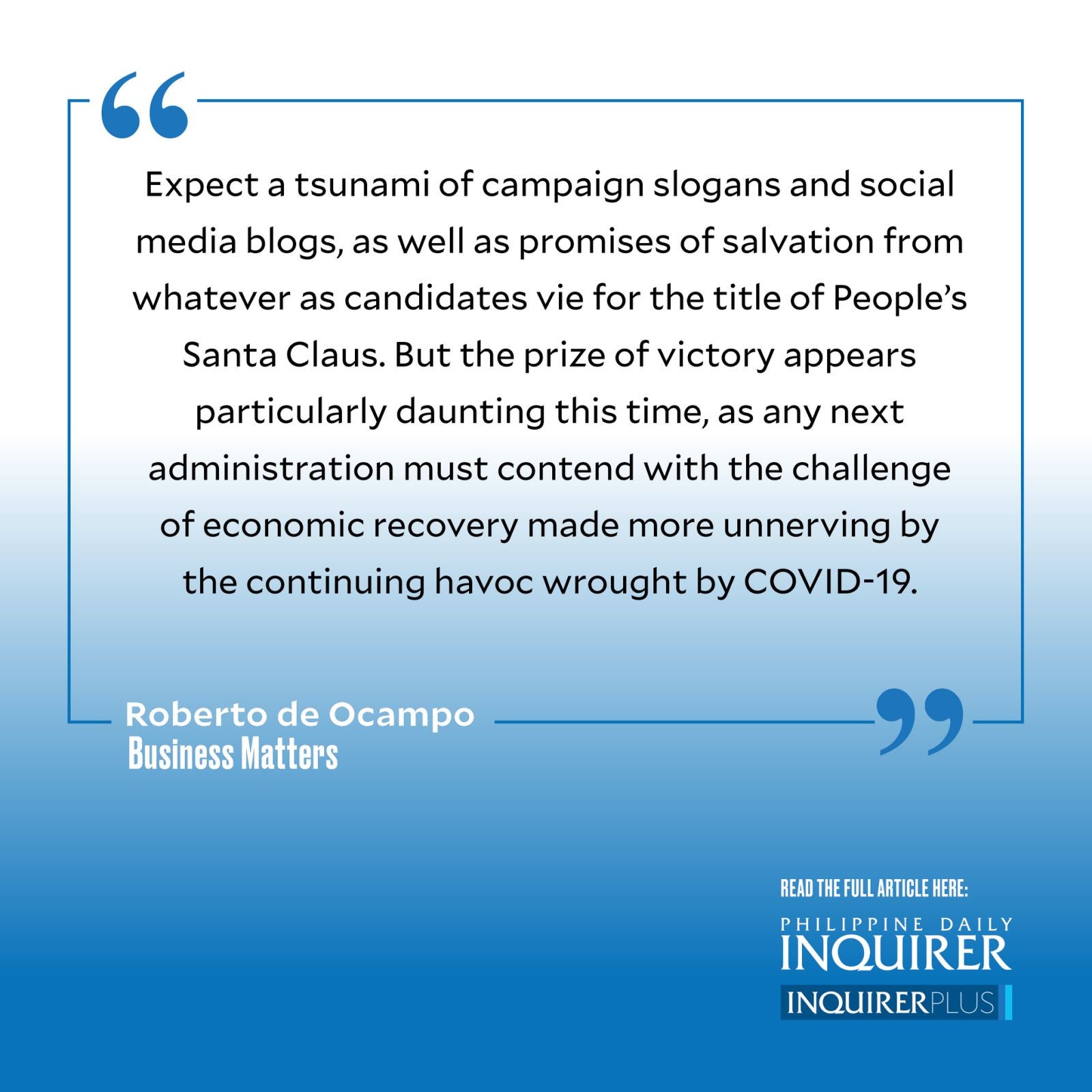 There are only a little over 12 days of countdown to Christmas Day when one would hope to receive from one’s true love(s) more than a partridge in a pear tree. This prelude to the presidential election year, however, brings another anxious countdown toward the official start of the campaign season, which would be Feb. 8 for candidates for president, vice president, senator, and party list groups; and March 25 for congressmen and regional, provincial, city, and municipal posts. After months of speculation and political maneuvering, including the President’s bizarre thrashing about, it would seem that the presidential tandems are more or less firmed up and the political battle lines drawn.

Expect a tsunami of campaign slogans and social media blogs, as well as promises of salvation from whatever as candidates vie for the title of People’s Santa Claus. But the prize of victory appears particularly daunting this time, as any next administration must contend with the challenge of economic recovery made more unnerving by the continuing havoc wrought by COVID-19.

Already, Finance Secretary Carlos Dominguez III has warned that any next administration will have to address the problems of looming massive debt and the specter of high inflation. The accumulation of debt has been the result of a seemingly no-choice option of providing hefty fiscal resources to prop up a pandemic-struck economy rendered moribund by mandated inactivity resulting in low income, high unemployment, and a shrunken tax base. This increase in borrowings has brought the Philippines’ debt to GDP ratio (our economy’s ability to pay its obligations) from a record low 40 percent in 2019 to a 16-year high of 63 percent this year, thus somewhat above the 60 percent threshold beyond which the debt service capacity of the Philippines becomes increasingly iffy.

Assuming reliance on sweeping lockdowns and severe economic restrictions as the default response to COVID-19 and its variants and assuming attempts to assuage that to be via further huge fiscal prop-up measures, the debt could balloon to worrisome levels as additional fiscal resources can only be squeezed from a combination of more borrowings, printing of currency, and higher taxes from an already severely strained tax base. This is a recipe for bringing the economy to an abyss of stagflation (stagnation plus inflation) and the population to deeper levels of poverty—a picture definitely not prettier than the pandemic itself.

To avert such a crisis, Socioeconomic Planning Secretary Karl Chua recently unveiled a 10-point policy agenda based on the realities that while COVID-19, like flu, is here to stay, a combination of an accelerated vaccination program and continued strengthening of our health care infrastructure, among others, should provide the necessary space for a wider and more rapid resurgence of economic activity. As of today, 80 million doses of vaccines have been administered and nearly 50 percent of the population have received the full dose. This has allowed for the easing of restrictions, resulting in a robust GDP growth of 7.1 percent last quarter, an increase in mall capacity to 63 percent, fast food capacity to 78 percent, and public transport capacity to 85 percent, among others. One is almost tempted to greet the revival of Edsa traffic gridlock with ironic jubilation!

A key component of Chua’s proposal is a change of the metrics used to track COVID-19 from the current system of tracking total cases to total severe/critical cases, from just total fatalities to severe cases to fatality ratio, and total vaccinated. This would allow for a clearer ongoing situationer upon which a more focused and targeted decision-making process can proceed, and minimize the possibility of unwittingly cultivating a “living in fear” mindset among the general public. Chua’s 10-point agenda is too extensive to completely print here but is readily accessible. It is thorough and well thought out, and would avoid the dreadful combination of runaway borrowings and anemic GDP. One would hope that it is adopted in toto by the IATF if even just to conclude its spotty pandemic management on a positive note. Competing presidential tandems would be well advised to embrace this nonpartisan paper across party lines, lest winners find themselves with a pyrrhic victory.

Business Matters is a project of the Makati Business Club.