Duterte and the US ‘Summit for Democracy’ 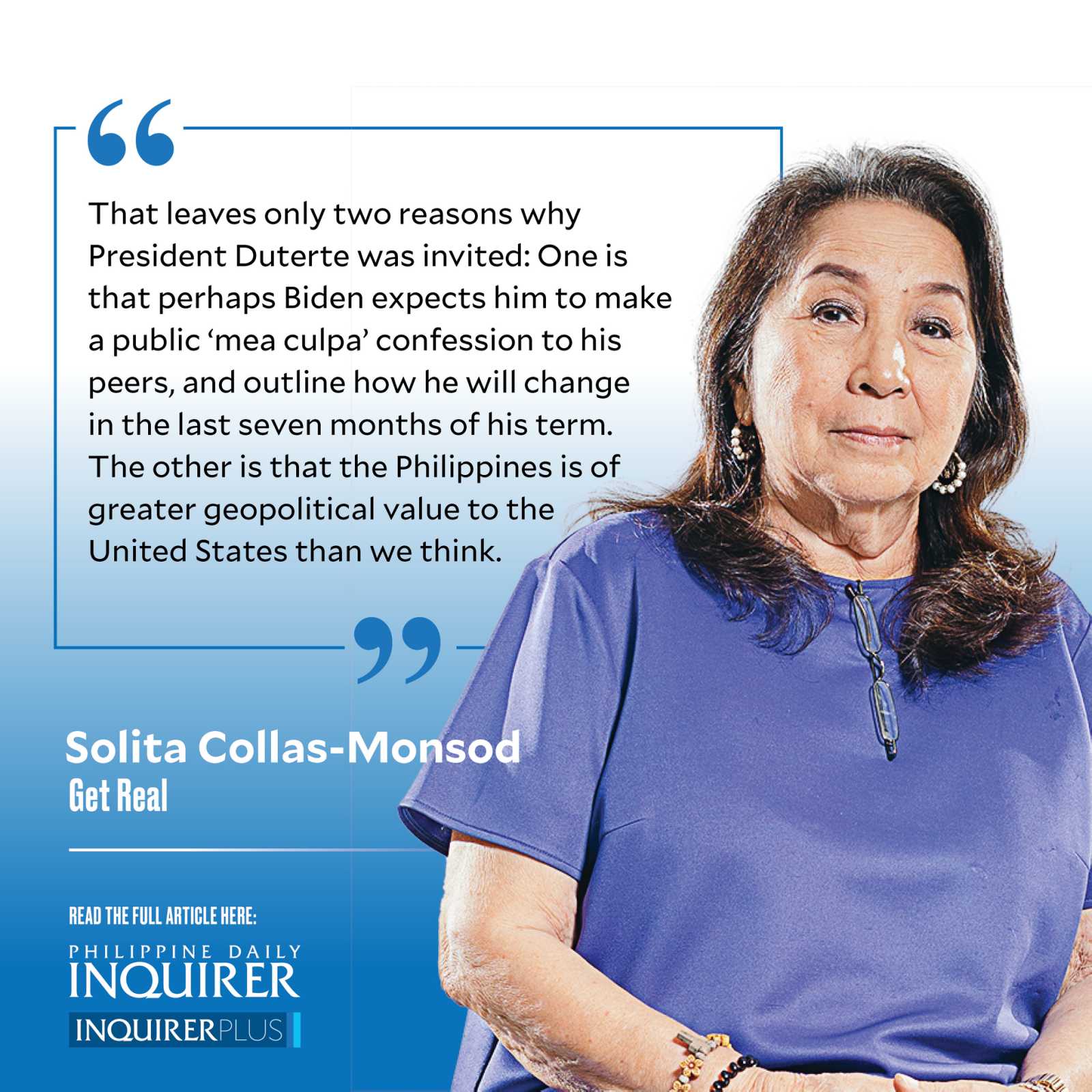 US President Joe Biden’s invitation to President Duterte to attend his two-day “Summit for Democracy” (Mr. Duterte has accepted) left a bad taste in the mouth for some human rights groups (see yesterday’s PDI) in the Philippines, as well as some Fil-Am groups in the US. The latter are scheduled to hold a protest rally and a press conference in front of the White House fence on Friday (their time) noon, under the leadership of Loida Nicolas Lewis of the US Filipinos for Good Governance, to express their outrage.

I admit that when I first read about it, I had strong feelings of déjà vu, and a mental picture of then Vice President George Bush Sr. of the United States giving a toast to Ferdinand Marcos, who had just been “elected” president of the Philippines in 1981 after “lifting” martial law. Bush congratulated Marcos on his election with these words: “We love your adherence to democratic principles and to the democratic processes.”

They both knew that when Marcos had “lifted” martial law and called for “elections,” the dictator kept in force all the decrees that he had promulgated and that were assembled in the National Security Code, including provisions such as six months’ imprisonment for “rumor-mongering,” summary dismissal of judges, and immunity for all public officers, civil and military, in carrying out the code. The code also outlined a national-security network capable of reaching down to household and classroom. So much for democracy and democratic processes.

Anyway, the Summit for Democracy is supposed to have three main themes: defending against authoritarianism, fighting corruption, and promoting respect for human rights. But those are not exactly Mr. Duterte’s strong suits. So that leaves only two reasons why he was invited:

One is that perhaps Biden expects him to make a public “mea culpa” confession to his peers, and outline how he will change in the last seven months of his term (after all, he aimed to solve the drug problem and corruption in six months—who knows?). We know Biden is an optimist, but even this is too much.

The other is that the Philippines is of greater geopolitical value to the United States than we think. That’s probably it. We should keep that in mind for the future, and not always feel that we are unworthy.

But let us look at the larger picture. The summit is the first of its kind. And, actually, given the backsliding of democratic governance all over the world (yes, the Philippines is just one of the more egregious examples), it is about time that some collective action be taken by those who sincerely believe in accountability and the rule of law, rather than the rule by one. Or we will be faced with more and more autocracies/dictatorships, exemplified by China and Russia. So holding a summit is a good thing.

The elephant in the room is that the host of the summit, the US, doesn’t have much moral ground to stand on. In the World Justice Report’s Rule of Law Index, the US performance deteriorated by 2.9 percent, worse than any of its developed country peers, and the same as the Philippines’ deterioration. Maybe it will be Biden who will publicly admit the US’ democratic shortcomings, although the fault is not really his, but his predecessor’s. But that public admission, and the vow to do better, will probably ensure the success of the summit.

There are 112 countries, including the US, which will be participating in the Zoom event. What they will say about their experiences with democracy, bad and good, may be the first step in building back better our democratic space. I cannot wait to hear what President Duterte will say. And President Bolsonaro of Brazil (he was invited, too). On the other hand, Turkey was not invited—so it is not all bad.

The other good news is that the two-day summit was preceded by a meeting of young leaders all over the world presided over by the US secretary of state. One of the first four panelists was a Filipino woman, a young faculty member of Mindanao State University. I did not catch her name, but she comported herself very well. So it seems that President Biden is not only depending on his current peers to make sure that democracy remains healthy and alive, but he has plan B: the young. That is reassuring.

In the meantime, we’ve got to make sure that our next president doesn’t have an autocratic, authoritarian bone in her body.