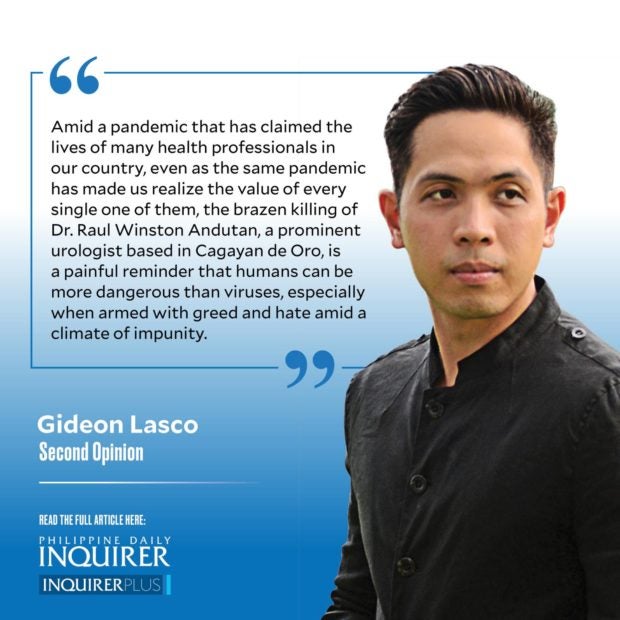 Amid a pandemic that has claimed the lives of many health professionals in our country, even as the same pandemic has made us realize the value of every single one of them, the brazen killing of Dr. Raul Winston Andutan, a prominent urologist based in Cagayan de Oro, is a painful reminder that humans can be more dangerous than viruses, especially when armed with greed and hate amid a climate of impunity.

As the Inquirer’s Jigger Jerusalem reported, Dr. Andutan “was alone in his SUV when he was shot dead in Barangay Nazareth past 10 a.m. on Thursday (Dec. 2). Although wounded, he was still able to drive away from the attackers but eventually rammed his vehicle in front of a laundry shop, injuring a bystander.” The good doctor was rushed to Maria Reyna-Xavier University Hospital—where he was medical director—but succumbed to “three gunshot wounds.”

Who killed Dr. Andutan? Proximally speaking, two of three arrested suspects have confessed, claiming that they were promised a P150,000 bounty to be shared by four people.

However, regardless of the motive and the identity of the mastermind—and even as some might point to this atrocity as another “isolated incident”—we cannot dissociate it from the climate of impunity that has enabled the killings of so many people in our country, many of whom were murdered in similar circumstances as Dr. Andutan: from gunmen riding-in-tandem to the brazenness of perpetuating murder in broad daylight or in public spaces.

In my own hometown of Los Baños, Laguna, it has been a year since our mayor, Caesar Perez, was shot dead in our very town hall, and today, justice has been elusive for him—notwithstanding the arrest of a suspect, a former town councilor, last month. It must be noted that Perez figured in one of President Duterte’s “drug watchlists” in the past, despite the lack of evidence to substantiate such lists.

Health professionals have not been spared from this nationwide violence. In December 2020, Dr. Mary Rose Sancelan, health officer of Guihulngan City in Negros Oriental who had been Red-tagged by a vigilante group, was gunned down as she and her husband were heading home. A few months earlier, it was National Center for Mental Health director Dr. Roland Cortez and his driver who suffered the same fate.

In July this year, Dr. Robert Cadulong, a retired government physician, was jogging in the poblacion of Pikit, North Cotabato, when he was shot “at close range by one of two persons on a motorbike,” according to a news report. And in September, Dr. Amor Trina Dait, who worked as a resident doctor in Abra and ran for mayor of the town of Pilar in 2019, was shot in her residence.

If we include the past several years, the list is even longer, and would include the killings of Dr. Shahid “Jaja” Sinolinding and Dr. Dreyfuss Perlas. There may be various reasons behind their deaths, but we cannot avoid confronting the underlying environment that enables such killings. If, as in the case of Dr. Andutan, P150,000 was all it took to kill a Filipino physician, what does it say of the price of human life in our country?

These incidents will further demoralize an already demoralized profession that that has been failed by this administration in providing even the most basic needs like long-promised hazard pay and benefits, in guaranteeing security, and in giving a sense of leadership amid the worst health crisis in over a century. And at a time when much is at stake for health care professions, the fact that Nurses United, a party list of health care workers, would be denied a chance to run in the coming elections speaks of a disregard for people who have sacrificed so much for our country.

All of the above will hasten a diaspora of health professionals to places where they feel that their lives and livelihoods are actually valued. Only by pursuing swift justice for victims of these senseless killings, taking urgent steps to prevent these from happening again, guaranteeing health care workers’ political rights, and acting on their everyday concerns can we convince more of them to stay.

In the meantime, as many of our colleagues have testified, Dr. Raul Andutan, a graduate of the UP College of Medicine, stands as an exemplar of a Filipino physician who was faithful to his calling to his very last day, his legacy undiminished by the manner of his passing. May his life inspire us to continue our work, even as his death should inspire us to demand justice with unwavering resolve.