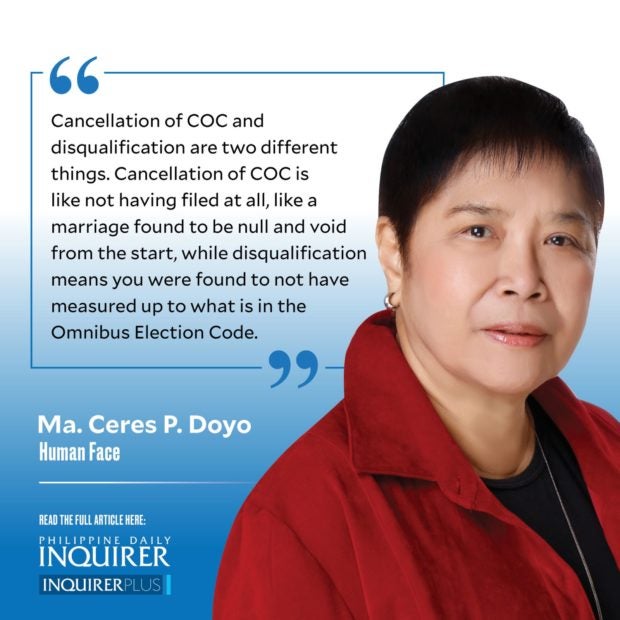 First, let me say that like the rare alignment of planets, I have two different “Human Face” columns in this paper today —  this one in the Opinion page and the other in the Inquirer’s 36th Anniversary Supplement. The title of the other one is “Pope to journos: ‘Listen, deepen, tell.’”

I have been writing for this paper for 36 years as a magazine feature writer, special reports (investigative) writer, and columnist.

I ended the other column with: “It has been a colorful 36-year journey after that dark era. Five presidents had come and gone and the sixth is now in the twilight of his brand of tyrannical rule. Six presidents with varying values, visions, and viciousness, leaders who led this country through historic climes and inglorious crimes that cried to the heavens for retribution. This woebegone republic is now in the cusp of a new era, in the throes of rebirth.

“On a personal note, as I myself have gushed with awe, gratitude, and sometimes with mock exasperation during the critical junctures in this continuing ride of truth seeking and truth telling: ‘Nobody told me it would be like this.’ But we are still here.”

With petitions filed by one group with the Commission on Elections (Comelec) to cancel the certificate of candidacy (COC) of no less than a presidential candidate, and by six other sets of petitioners/intervenors to disqualify him based on alleged falsehoods in his COC, one can’t help presuming. Presuming what? That there are candidates also walking around out there whose answers to questions in their COCs are crying out to be scrutinized, whose COCs contain falsehoods despite their having sworn to have stated the truth.

It is also troubling because if not for the seven landmark petitions filed against this one presidential candidate, no one, not even the Comelec perhaps, would have looked into the veracity of his answers in his COC, and of the many candidates’ answers as well. Does the Comelec really have the time and personnel to scrutinize each and every COC? Or does it just wait for petitioners who seek the cancellation of a particular candidate’s COC and/or disqualification to come up with arguments and proofs?

Cancellation of COC and disqualification are two different things. Cancellation of COC is like not having filed at all, like a marriage found to be null and void from the start, while disqualification means you were found to not have measured up to what is in the Omnibus Election Code. In simple language, something about what you had done/committed or had not done but should’ve, like paying taxes, filing income tax returns, paying fines, or serving sentence. Reminds me of the movie title “I saw what you did and I know who you are.”

How many can say that of someone’s COC if no one looked? I did learn that the first set of petitioners (seeking the cancellation of the COC of the presidential aspirant, not his disqualification) got a copy of the presidential candidate’s COC from a source (“Medyo faded pa nga”) but later acquired a Comelec certified true copy.

And so the ball started rolling because the petitioners were hell-bent on getting this candidate out of the way. The motive can be gleaned from the Statement of Facts that reads like martial law history and precedes the Arguments. But what gives it away is “the cry of a Martial Law victim after learning” of the candidacy, the kicker before Nature of the Petition that begins on Page 1. What an explosive summation as first salvo. The rest is legalese.

But how many people who know of a candidate’s past (i.e. conviction, fines, penalties) can say “I know what you did and I know who you are” and bravely go to the Comelec?

Comelec spokesperson James Jimenez has cautioned parties in the petitions to refrain from speaking publicly about the merits of the case. The Comelec is not a court of law, but Theodore Te, lawyer in the first petition, said it is quasi-judicial body. Therefore I must heed.