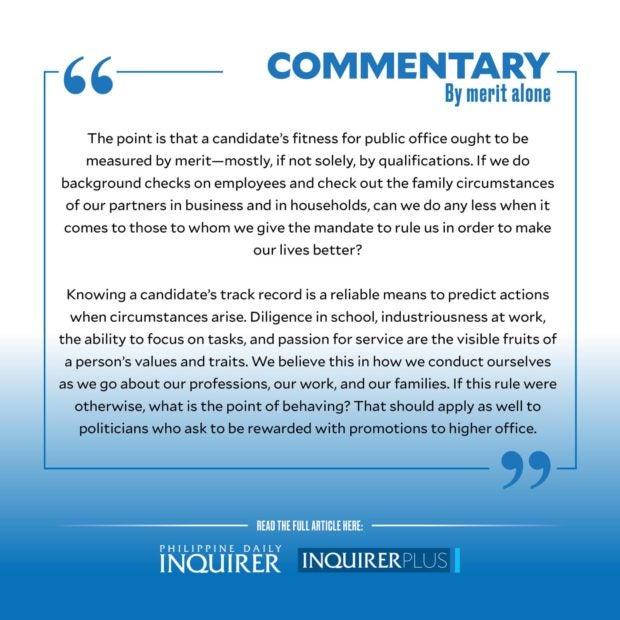 No matter how we started at birth, it is the daily learnings, constant struggles, and key decisions we make in life that determine our destiny. True, some people have it better — silver spoon, good genes, loving environment — but that is only a part of how we turn up. We are, in essence, the captains of our ship and of our soul.

Democracy Philippine-style is laden with problems and challenges too many to list down. There is, however, one shining value that redeems it. Any person who wants to be the president and leader of our country can do so and run for public office.

Consider the current crop of presidential aspirants, who all took very different paths to get to where they are.

Sen. Manny Pacquiao is recognized as one of the world’s best boxers in the history of the sport. He carved his name through talent backed up by extraordinary hard work. When he decided to enter politics, he could have deployed the same discipline to his new craft of legislation to help solve the country’s ills, instead of continuing to sway and dance in the ring. However, his performance as a legislator has been dismal, and doling out money during public appearances is not governance by any measure.

The story of Mayor Isko Moreno is compelling. His family background, his upbringing, his childhood poverty, his break as an actor, and his eventual transition into a local city official — they make for a moving and inspiring narrative. In his over two decades in politics, he completed his studies and paid his dues to learn the ropes of City Hall. As a first-term chief executive of Manila, he was able to translate his ideas and alliances into programs and actions meant to serve his constituents. This is now his proof of concept and the basis for his presidential application.

Sen. Ping Lacson was acclaimed for his stint as head of the Philippine National Police. His commonsensical managerial approach to trim police waistlines still resonates among today’s uniforms in blue. His time as a legislator has been marked by his consistent stand to reject any form of pork barrel. This difficult, principled stand counts as much as passing any major law.

Vice President Leni Robredo comes from the middle class—a working mom who served civil society organizations before she became second in command. In the ordinary course of state affairs, the VP position is the ideal training ground for the presidency based on perspective and experience, competency, and integrity. And in this regard, her performance as VP has been well-documented and acknowledged by many even without the President’s support.

Former senator Bongbong Marcos’ stint in the Senate was unremarkable. His executive experience may be better. What stands out is that he is the son of his father Ferdinand Marcos Sr., whose tenure has been both praised and condemned. The sins of the father may not be of the son, for there is no guilt by blood. Responsibility is always personal. However, there must be an honest assessment of rights and wrongs and a reasonable expectation of what’s next.

The point is that a candidate’s fitness for public office ought to be measured by merit — mostly, if not solely, by qualifications. If we do background checks on employees and check out the family circumstances of our partners in business and in households, can we do any less when it comes to those to whom we give the mandate to rule us in order to make our lives better?

Knowing a candidate’s track record is a reliable means to predict actions when circumstances arise. Diligence in school, industriousness at work, the ability to focus on tasks, and passion for service are the visible fruits of a person’s values and traits. We believe this in how we conduct ourselves as we go about our professions, our work, and our families. If this rule were otherwise, what is the point of behaving? That should apply as well to politicians who ask to be rewarded with promotions to higher office.

Unfortunately, elections Philippine-style admit of no such clear thinking and calm reflections. Mostly, misinformation, bias, and blind attachments determine one’s voting preference these days. Filipino voters are said to be emotional; they will go for whoever they feel are able to establish a connection with them, or are able to capture in a slogan their deepest desires and fears. Surveys that convey winnability and the penchant by many to hop aboard the bandwagon of popularity are other factors that muddle up the picture of who best should lead us.

Leaders with feet of clay are all around us. Merit alone should be the ideal standard for choosing among them. As citizens who care for this republic of ours, we can do nothing less.

Geronimo L. Sy is a former assistant secretary of the Department of Justice.

Read Next
Isko Moreno: The ‘Macron of Asia’?
EDITORS' PICK
Gov’t eyeing COVID-19 tests in pharmacies
Municipal court in Pangasinan sets arraignment for ‘Lolo Narding’
Mobile COVID-19 vaccination for commuters, transport workers set at PITX
31,173 new COVID-19 cases push PH’s active tally to 275,364
Gear up and get ready to play with Yamaha Mio Gear
Acer starts the year off strong with the Aspire Vero National Geographic Edition
MOST READ
Imelda Marcos trends on Twitter after octogenarian jailed for allegedly stealing mangoes
SSS: Members on home quarantine due to COVID-19 can apply for sickness benefit
Municipal court in Pangasinan sets arraignment for ‘Lolo Narding’
Help pours in for octogenarian jailed for ‘stealing’ mangoes in Pangasinan
Don't miss out on the latest news and information.