While the government ramped up COVID-19 vaccinations with a three-day national inoculation event last week and opened booster shots for fully-vaccinated adults on Dec. 3, the “last-mile” part of the process —  issuing digital vaccine certificates to vaccinated citizens — seems to have been given little attention.

Attesting to this neglect are the complaints about undue delays and erroneous entries in the VaxCertPH document that have been aired in the past weeks, mostly by Filipinos who need the official document as a prerequisite for their travel abroad.

VaxCertPH, accessible through https://vaxcert.doh.gov.ph, is the self-service portal where those who have been fully vaccinated in the Philippines can acquire a digital copy of proof of their vaccination status. The certificates can be used for international travel since these comply with the guidelines of the World Health Organization.

The need for a standard vaccine certificate became apparent after Hong Kong, in October, refused to honor the physical vaccine certificates issued by the various local government units (LGUs), affecting some 3,000 overseas Filipino workers who were due to return to their jobs in the territory.

The physical vaccination cards, which varied in look depending on the issuing LGU, were not centralized in an official database and were prone to being faked. 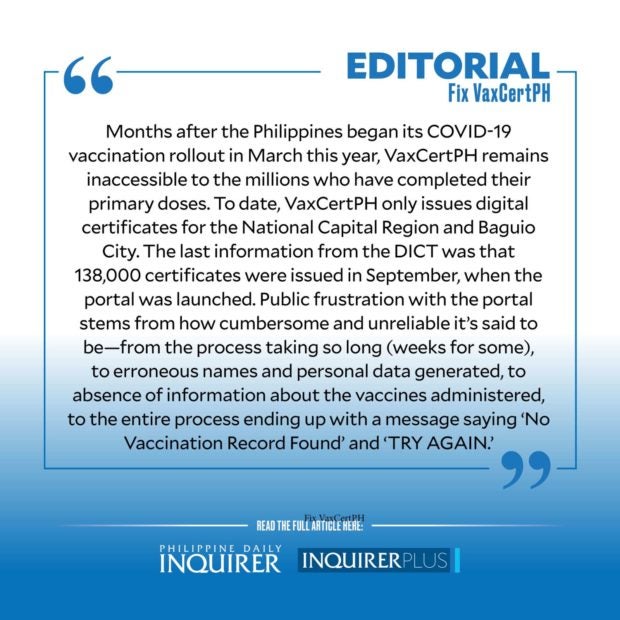 Under the COVID-19 Vaccination Program Act of 2021, the Department of Health (DOH) and the Department of Information and Communication Technology (DICT) were mandated to come up with a centralized database of vaccinations and a uniform format for the vaccine cards that will “conform with globally accepted standards.’’

Yet months after the Philippines began its COVID-19 vaccination rollout in March this year, VaxCertPH remains inaccessible to the millions who have completed their primary doses. To date, VaxCertPH only issues digital certificates for the National Capital Region and Baguio City. The last information from the DICT was that 138,000 certificates were issued in September, when the portal was launched.

Public frustration with the portal stems from how cumbersome and unreliable it’s said to be — from the process taking so long (weeks for some), to erroneous names and personal data generated, to absence of information about the vaccines administered, to the entire process ending up with a message saying “No Vaccination Record Found’’ and “TRY AGAIN.’’

The certificates are supposed to be available 48 hours after a person got his/her second dose of a two-dose vaccine or a single-dose jab, but a doctor’s experience proved otherwise: “After weeks of applying/reapplying and consistent emails and follow-ups, I finally secured my Vaccination Certificate from VaxCert PH,” he said in a Twitter post on Nov. 24.

Others have been dismayed at finding incorrect entries in their cards and having to spend more time correcting them. To correct these errors, an individual must update the record and upload a photo of his/her physical vaccination card; the corrections will then be sent back to the LGU, to “validate and rectify’’ the record. The process essentially passes the LGU’s job back to the citizens. One netizen reported that a colleague of hers tried to correct his record through a VaxCertPH booth in a mall; that friend’s experience had her exclaiming on Twitter, ”It’s useless! A spot in the mall at that! OMFG! What a waste of taxpayers’ money!”

The main culprit for the problems bugging VaxCertPh, according to DICT Undersecretary Manny Caintic, is the backlog of LGUs in uploading their constituents’ vaccination data to the portal.

“I call on the LGUs. The reason why there are problems in getting VaxCert is because of the unorganized and incomplete uploading of records of the people they vaccinated in their jurisdictions,” Caintic said in a Palace briefing on Nov. 15. “The huge cause is on the data encoding. [The LGUs] already have the data but it is not yet submitted to the system to be uploaded. Our LGUs have at least 30 percent backlogs.”

Caintic also called for 50,000 volunteer data encoders, noting their difficulty in finding volunteers because “first of all, we need to feed them and give them incentives.’’

As of Dec. 5, more than 38.2 million individuals have been vaccinated, accounting for 34.7 percent of the population, and with some 510,000 boosters already administered. During the three-day national vaccination drive last Nov. 29-Dec. 1, some 9.9 million were vaccinated. One day of delay in fixing the VaxCertPH problem results in mounting records to be encoded, checked, and issued.

Unless the DOH, the DICT, and the LGUs get their act together to fix the VaxCertPH process fast, a netizen’s complaint will soon be the outcry of millions more: “Feed your encoders. Please improve the encoding. It can’t always be like this. We have to do better. We’re also tired.’’