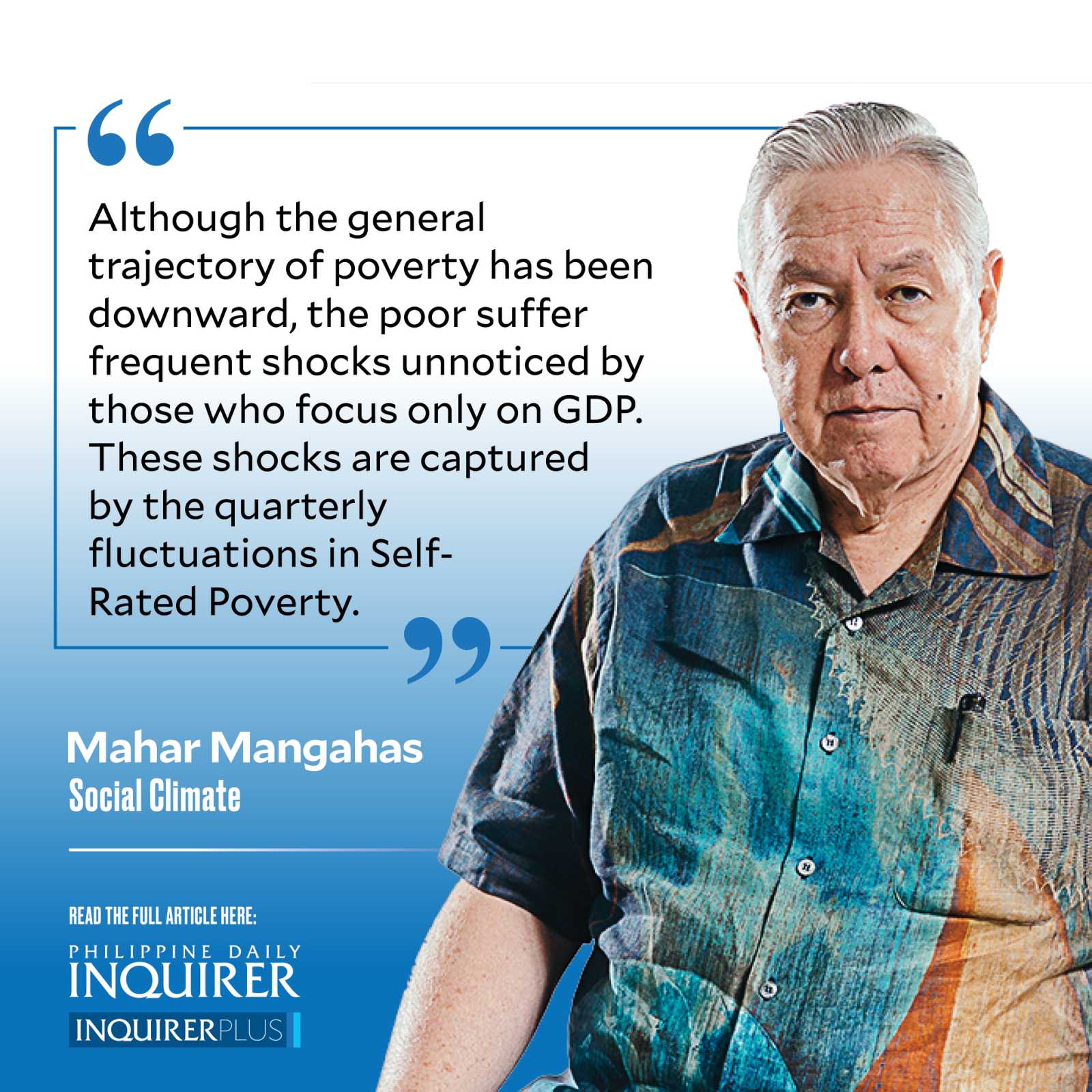 The SRP methodology has been unchanged for 38 years, from when first used in an April 1983 national survey by the Development Academy of the Philippines, where I was vice president for research. In that relatively large survey (3,000 households), Self-Rated Poverty was 55 percent. It was still a calm time, four months before Ninoy Aquino returned and was martyred.

SRP’s second national trial was two years later, in the July 1985 sociopolitical survey (2,000 households) of the Bishops-Businessmen’s Conference for Human Development. It found Self-Rated Poverty at 74 percent, the all-time high to this day. The drastic pauperization of the Filipino people was obviously due to the hyperinflation in 1984-85.

Since 1986, SRP has been in the regular agenda of the non-commissioned Social Weather Surveys: 13 times in Cory Aquino’s time, 25 times in Ramos’ time (when quarterly monitoring started), 12 times under Estrada, 39 times under Arroyo, 24 times under Noynoy Aquino, and 18 times under President Duterte to date.

The national sample size was 2,000 in 1986-87, and has been 1,200+ since 1988—a big cost-reduction, for a small sacrifice in statistical accuracy. For three decades now, the SWS quarterly poverty reports have been as timely as the quarterly gross domestic product (GDP).

The official poverty figures, on the other hand, have only 12 data points in 1985-2018, being dependent on the Family Income and Expenditures Survey, which is so expensive that it can be done only once every three years. The Philippine Statistics Authority has no poverty numbers for 2019 and 2020. The sluggishness of the official system of monitoring poverty makes it inherently incapable of depicting the dynamics of poverty from year to year, much less from quarter to quarter.

In 2020, the lockdown on public transportation prevented SWS from fielding face-to-face interviewers for its SRP items in the first three quarters. The national SRP percentages resumed at 48 in November 2020, 49 in May 2021, 48 in June 2021, and 45 in September 2021.

Although the general trajectory of poverty has been downward, the poor suffer frequent shocks unnoticed by those who focus only on GDP. These shocks are captured by the quarterly fluctuations in Self-Rated Poverty.

The SRP time series is an adequate base for building econometric models for forecasting quarterly poverty. All economic factors, including GDP, are candidate variables for such models. From my past research, I expect consumer price inflation and joblessness to be much more potent determinants of poverty than GDP—which is a roundabout way of saying that I don’t put much faith in trickle-down economics.