Did Marcos Jr. serve his sentence? 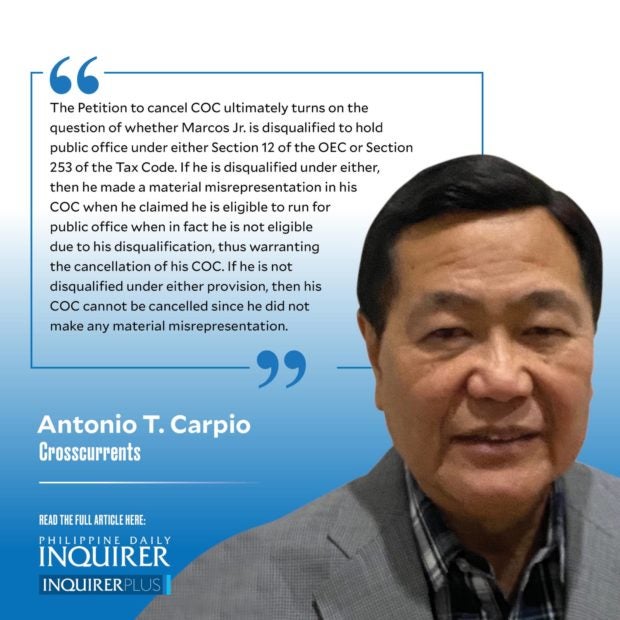 Section 12 of the Omnibus Election Code (OEC) provides that any person convicted of a “crime involving moral turpitude shall be disqualified to be a candidate and to hold any public office.” Such disqualification is “removed xxx after the expiration of a period of five years from his service of sentence.” If the penalty is only payment of reparation and fine, the convict is deemed to have served his sentence upon payment of the reparation and fine. Since the CA decision ordered Marcos Jr. to pay reparation, which is the deficiency income tax, plus fine, the question arises if Marcos Jr. had paid the deficiency income tax and fine, and when.

The Answer of Marcos Jr., however, raises the defense that the crime for which he was convicted does not involve moral turpitude because he was only fined for non-filing of income tax returns, which he asserts does not involve moral turpitude. Thus, Marcos Jr. claims he cannot be disqualified under Section 12 of the OEC which requires a crime involving moral turpitude. There are many reasons why the non-filing of income tax returns, particularly if done repeatedly over several years as in the case of Marcos Jr., constitutes moral turpitude. Moreover, the Petition to cancel Marcos Jr.’s COC also advances another separate and independent ground—that Marcos Jr. is “perpetually disqualified” to hold public office for conviction of “any crime” under the Tax Code.

Section 253 of the Tax Code mandates that a public officer shall be “perpetually disqualified from holding public office” if he is “convicted of any crime penalized by this Code.” It is immaterial whether or not the crime involves moral turpitude. It is also immaterial if the sentence has been served as the disqualification is perpetual. The Answer of Marcos Jr. is completely silent on this second separate and independent ground for his disqualification. Thus, the material averments in the Petition relating to this second ground, not having been specifically denied by Marcos Jr., are deemed admitted.

Read Next
Filipino voters presented with a ‘COG’
EDITORS' PICK
Gov’t eyeing COVID-19 tests in pharmacies
Municipal court in Pangasinan sets arraignment for ‘Lolo Narding’
Mobile COVID-19 vaccination for commuters, transport workers set at PITX
31,173 new COVID-19 cases push PH’s active tally to 275,364
Gear up and get ready to play with Yamaha Mio Gear
Acer starts the year off strong with the Aspire Vero National Geographic Edition
MOST READ
Imelda Marcos trends on Twitter after octogenarian jailed for allegedly stealing mangoes
Octogenarian jailed for ‘stealing mangoes’ freed after people chip in for bail
If elected VP, Sara Duterte will push for mandatory military service for all Filipinos
Help pours in for octogenarian jailed for ‘stealing’ mangoes in Pangasinan
Don't miss out on the latest news and information.