Can they be trusted? | Inquirer Opinion
Close
menu
search

Can they be trusted? 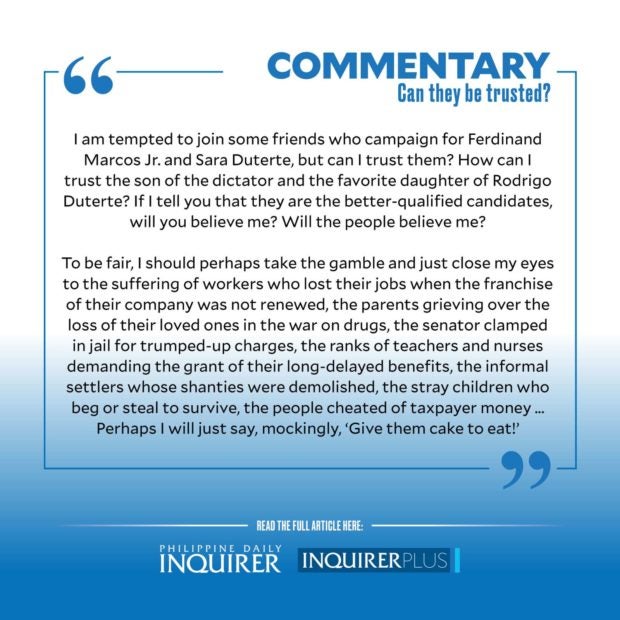 I am tempted to join some friends who campaign for Ferdinand Marcos Jr. and Sara Duterte, but can I trust them? How can I trust the son of the dictator and the favorite daughter of Rodrigo Duterte? If I tell you that they are the better-qualified candidates, will you believe me? Will the people believe me?

To be fair, I should perhaps take the gamble and just close my eyes to the suffering of workers who lost their jobs when the franchise of their company was not renewed, the parents grieving over the loss of their loved ones in the war on drugs, the senator clamped in jail over trumped-up charges, the ranks of teachers and health care workers demanding the grant of their long-delayed benefits, the informal settlers whose shanties were demolished, the stray children who beg or steal to survive, the people cheated of taxpayer money … Perhaps I will just say, mockingly, “Give them cake to eat!”

Seriously, how can I really trust that, if elected, Marcos Jr. and Sara Duterte, and their party candidates, will not take advantage of their positions to enrich themselves and those close to them? How can I bring myself to believe that Marcos Jr. and Sara Duterte are not really ambitious, not obsessed with wealth, power, and the vindication and/or protection of their family name?

FEATURED STORIES
OPINION
Marcos Sr. on Marcos Jr.
OPINION
What can we expect
OPINION
The rise of the Dutertegarchs

liabilities, and net worth of the president and other top officials? What about the Pharmally scandal? The West Philippine Sea? Etc.

Can I trust that, if elected, Marcos Jr. will not use his power to grant pardon to Imelda R. Marcos, his beloved mother, who has been convicted for unexplained wealth? Will Marcos Jr. not weaponize the law to persecute his critics and perceived enemies of his government?

In announcing his candidacy, Marcos Jr. declared with a straight face that we should “leave the past and move on.” His rhetoric merely reveals his intention to follow in the footsteps of his dictator father. Surely, if elected, Marcos Jr. will direct all his energy toward his grand vision of restoring the Philippines’ so-called “golden age.” Oh no, not again!

I shudder as I recall that in 1968, then President Ferdinand Marcos declared in his State of the Nation Address before the old Congress that “the country is sitting on top of a social volcano that will erupt with or without communist prodding.” Before we knew it, he had imposed martial law in 1972 and rounded up all his political enemies, and tortured to death scores of young activists.

“Those who do not remember the past are condemned to repeat it,” warned George Santayana.

It is a sad thing that well-entrenched politicians in the country who belong to the powerful political dynasties continue to dominate the political scene, like Marcos Jr. and Sara Duterte, and their party candidates. All I hear is that the candidates will fight against corruption, defend our territory, protect the fishermen, create jobs, stop impunity, eradicate poverty, and bring the country to a bright future. But the harsh reality is that the sufferings of the countless victims of injustice in the country have only grown sharper across the years. The oppressed are left alone, helpless. They cannot do anything but grit their teeth, clench their fists, and cry to high heaven for vengeance. They seek justice, not mercy. They have long been waiting for deliverance; six more years of the cruel system and the same faces and old rotten politics only extend the simmering disillusionment.

Mariano F. Carpio is a retired teacher of the University of Santo Tomas.