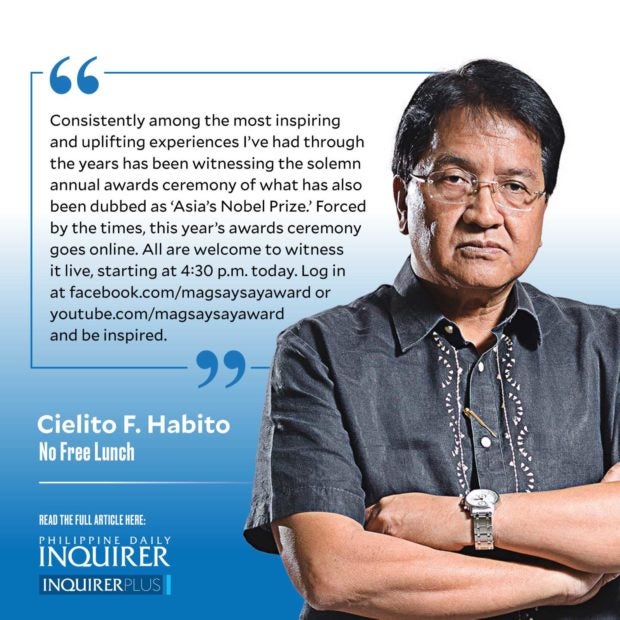 “I believe that the President should set the example of a big heart, an honest mind, sound instincts, the virtue of healthy impatience and an abiding love for the common man.” These words from the man countless Filipinos believe to have been our country’s greatest President are immortalized on a marble wall at the Ramon Magsaysay Center along Roxas Boulevard in Manila. Perhaps the best-known line in President Magsaysay’s Credo inscribed therein is his declaration: “He who has less in life should have more in law.”

He also proclaimed: “I believe that a high and unwavering sense of morality should pervade all spheres of governmental activity … that the pulse of government should be strong and steady, and the men (and women) at the helm imbued with missionary zeal. I believe in the inviolability of human rights … (and) that there is neither need nor reason to compromise the dignity of man.”

Apt words for the times from the man after whom is named Asia’s most prestigious prize, bestowed on those who manifest a rare quality that the Ramon Magsaysay Award Foundation (RMAF) seeks in its laureates, summed up in the phrase “greatness of spirit.” Fellow Inquirer columnist and RMAF co-trustee Professor Randy David best described it in an article three years ago: “‘Greatness of spirit’ signifies a passionate commitment to a chosen purpose that, invariably, serves the common good. Single-minded and unwavering, this commitment is typically accompanied by a clear-minded comprehension of what needs to be done, and why the right time to do it is now. The individuals who are in its grip manifest an uncommon willfulness in the face of adversity — which is why they are often thought of as human beings out of season—ahead of their time, out of place in the modern world, or plainly mad.”

“Mad” may indeed be how others would be tempted to describe this year’s five awardees, four individuals, and one organization. The Filipino awardee, Roberto “Ka Dodoy” Ballon Jr., a fisherman from Barangay Concepcion, Kabasalan, Zamboanga Sibugay, organized his fellow fishers 35 years ago to conserve their fishing grounds, and started planting mangroves long before its importance became more widely understood. “Pinagtatawanan kami ng ibang tao noon kasi sira daw ang ulo namin at nagtatanim ng bakawan, eh marami pa naman daw natitira.” (People laughed at us then and called us crazy because the mangroves were still dense at that time.) Dr. Muhammad Amjad Saqib left a secure position of responsibility in the Pakistan civil service decades ago to devote himself to full-time work assisting his poor countrymen get access to credit. He not only sustained his organization’s creative model of interest-free Islamic microfinance, but made it flourish and expand to serve other needs of their poor stakeholders, including health, education, and even clothing.

Steven Muncy has dedicated his life to helping refugees from Vietnam, Cambodia, Myanmar, and the Philippines, ever since he volunteered to work in 1980 as a young teacher at the Bataan Refugee Processing Center.

A colleague noted how “despite Steve’s own limitations—foreign, white, tall, hard to hide—he continues to go to the field and to the camps,” exposing himself to potential risk from lawless elements. Dr. Firdausi Qadri has shunned a wealth of high-paying international opportunities, opting to devote her career to vaccine research on various common infectious diseases especially afflicting children in her native Bangladesh. And WatchDoc, an Indonesian audiovisual production house founded in 2011 by journalists Dandhy Laksono and Andhy Kurniawan, has made it its mission to produce documentary films on the non-lucrative themes of social justice and human rights, to a very large following.

Consistently among the most inspiring and uplifting experiences I’ve had through the years has been witnessing the solemn annual awards ceremony of what has also been dubbed as “Asia’s Nobel Prize.” Forced by the times, this year’s awards ceremony goes online. All are welcome to witness it live, starting at 4:30 p.m. today. Log in at facebook.com/magsaysayaward or youtube.com/magsaysayaward and be inspired.