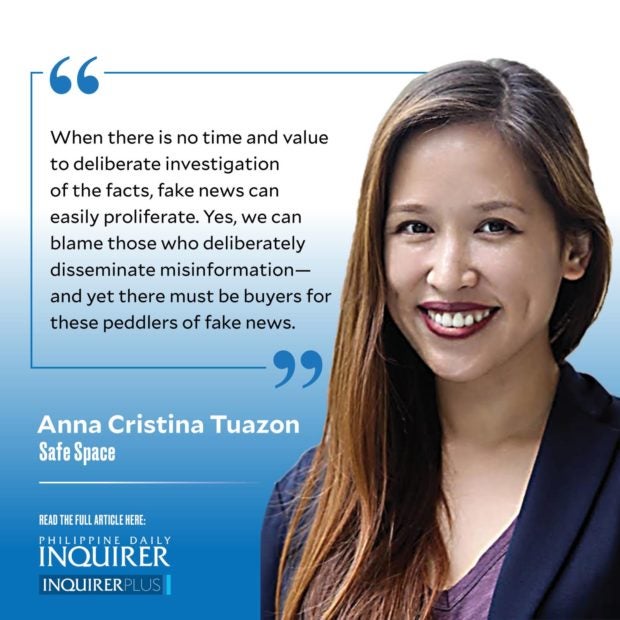 (TL;DR: Truth is found in long-form, not in soundbites.)

The acronym above stands for “too long; didn’t read,” which signifies that the article or post is overly long and not worth reading in its entirety. It is accompanied by a short summary, usually witty or sarcastic in form. This is how we take in information now: it must be immediately accessible and must not require too much attention or thinking. A complicated phenomenon? It doesn’t matter; simplify it. A tricky situation? Skip the context; just tell us who to cancel. It therefore should be no surprise to us that what is considered truth or facts nowadays are those that know how to play the game. Make it short, make it snappy, make an art card, make it viral.

When there is no time and value to deliberate investigation of the facts, fake news can easily proliferate. Yes, we can blame those who deliberately disseminate misinformation — and yet there must be buyers for these peddlers of fake news. In a study “The Link Between Fake News Susceptibility and Political Polarization of the Youth in the Philippines” by Boses, Opinyon, Siyasat, at Siyensya para sa Pilipino (BOSES Pilipinas), a research initiative established by the Ateneo School of Government, they found that college students seem to have great difficulty in perceiving fake news from real news. They also saw that those who rely on Facebook for information tend to be more susceptible to fake news. What grabbed the headlines (or had more virality) was that supporters of President Duterte also seem to be more susceptible to fake news as compared to supporters of Vice President Leni Roberto.

I typically take such results with a critical grain of salt, as we tend to focus on their generalized (and more sensational!) conclusions rather than recognize the limits of their methodology and proceed cautiously. I took the group’s quiz to experience the measure myself and am a bit ashamed to say I didn’t get a perfect score (mostly because I couldn’t believe that certain quotes were really uttered by public officials). I can see the limitations of their methodology: since it focused on quotes from public officials, it requires either prior knowledge of the event that produced the quote or a deep knowledge of the official’s character to determine if this was something they would say. But how about situations where all you saw was a quote card without context and you weren’t too familiar with the person? How can you tell then if it’s fake or not?

The study assumes that fakes news can be identified in seconds simply by looking at a quote. In reality, identifying fake news is something that requires deliberate thought and research. More importantly, it takes time and effort. It requires looking at multiple sources of information. We need to carefully observe the logical flow to determine if fallacies are taking place. We have to check our personal biases and see if it is affecting how we view the credibility of the speaker or source. Are we thinking it’s true simply because we agree with what it says? Are we likely to assume it’s fake news because the information is coming from the other side of the political spectrum? (“Of course you’d say that, you’re for the other side!”) Are we basing our sense of truth based on what our own family believes? (“But my dad says it’s true!”) Or, perhaps, are our emotions overly influencing how we see the facts? (“I feel it’s true.”)

In a world where information is both over-regulated (the political pressures and threats faced by accredited media organizations) and under-regulated (the free-for-all that is social media and vlogs), it has become increasingly more difficult to determine the truth. Credibility is on its way to extinction simply because we have unmoored it from truth and facts. We no longer see scholars, scientists, and experts as credible sources because they sometimes tell us truths we don’t want to hear. Admittedly, many such “experts” have sold out on truth in favor of political currency or clout, further eradicating credibility for the rest of us. When experts have failed us, we turn instead to those who can validate us. What people consider credible now are those who can tell them what they want to hear: that their thoughts and feelings make sense. That they’re right to support who they support. That they’re right to get mad. That they’re right and everyone else is wrong. We no longer see the world as it is; we just see mirrors and mistake it for truth.