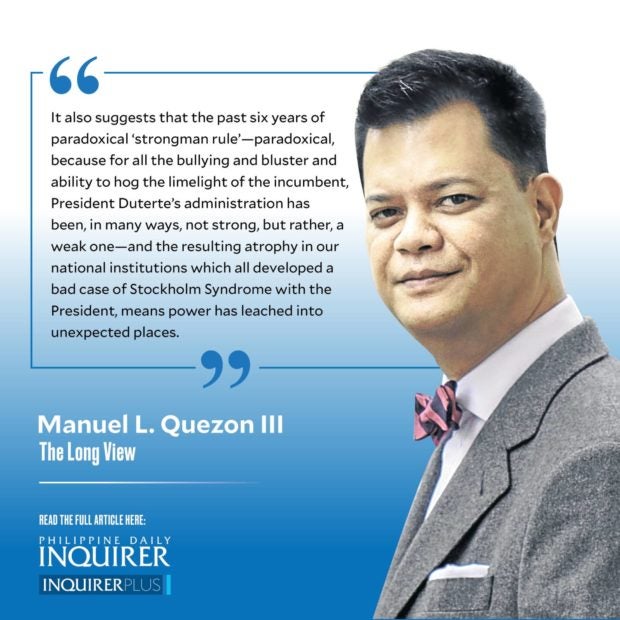 Back in October, there was talk in diplomatic circles that provincial politicos have been consolidating among themselves and nominating one representative to deal with whoever becomes president as a single bloc, to have the most leverage for political survival. Because of the Supreme Court’s historic Mandanas Ruling in 2018, the internal revenue allotments of local governments are scheduled to increase by 55 percent. The present administration got the ball rolling on “devolution transition plans” which all sounds nice, but there are concerns over what the national government will choose to declare as devolved, as well as whether local governments are able, and not just willing, to absorb additional funds. What diplomats were talking about suggests a pragmatic recognition by local governments that they have to present a united front to the next administration.

It also suggests that the past six years of paradoxical “strongman rule” — paradoxical, because for all the bullying and bluster and ability to hog the limelight of the incumbent, President Duterte’s administration has been, in many ways, not strong, but rather, a weak one — and the resulting atrophy in our national institutions which all developed a bad case of Stockholm Syndrome with the President, means power has leached into unexpected places.

These places range from the police, who exercised more local power than at any time since martial law, to local political parties responding to the almost-permanent state of disruption in what passes for the ruling coalition (exceeded only by the starvation in resources being experienced by the opposition). This meant that over the past six years, two of the last old-style national parties, the Liberals and both wings of the PDP-Laban (Lakas-CMD, like Voldemort, was withered for a time but has regained some of its former plumpness), have withered away, while the national parties that exist as corporate subsidiaries, the Nacionalistas, National Unity, and Nationalist People’s Coalition, are no longer perceived to be mounting truly national, resource-rich, operations on the scale and scope of the past.

Five days ago, Hugpong ng Pagbabago, the regional party, announced that Davao City Mayor Sara Duterte was once again its chair after having resigned to join Lakas-CMD, which made her its chair. Having become that party’s official candidate, and officer, she apparently could resume membership in her regional party. Yesterday, local political party Bando Osmeña-Pundok Kauswagan or BOPK announced that it was endorsing Leni Robredo. The party’s mayoral bet, Margot Osmeña, cited as one reason Robredo agreeing to petition the Comelec to create special precincts for over a hundred thousand call center agents “who work in one area in Cebu City.”

If October to November was a shell game involving substitutions for final candidates, then it can be said that the real action is taking place in the regional and local parties. Cebu alone has the following clan-centered local parties: the previously-mentioned Bando Osmeña-Pundok Kauswagan; 1-CEBU of Gwendolyn Garcia and Kugi Uswag Sugbo of Alvin Garcia; Barug Alang sa Kauswagan ug Demokrasya of the Duranos; Partido Barug of Michael Rama; and the recently-revived Partido Panaghiusa (originally formed in the anti-Marcos days, an era which saw the monolithic national Kilusang Bagong Lipunan gobble up the old NP and LP, with newer, more regional-centric parties taking up the resistance; PDP-Laban’s own origins date to this era, the time of Panaghiusa in Cebu and the Mindanao Alliance).

Of the presidential candidates, three have their local parties: Asenso Manileño of Isko Moreno; People’s Champ Movement of Manny Pacquiao; Hugpong sa Tawong Lungsod of the Dutertes, while Daughterte herself is the on-again, off-again, chair of Hugpong ng Pagbabago which is a notch above these others, because it is a regional “aggrupation,” as we vividly like to call such things (there is, literally, an Aggrupation of Parties for Prosperity in Zamboanga).

It’s interesting to note that as local and regional leaders have learned to game the party list system, the affiliation of some national candidates includes attracting party list bigwigs, such as Lito Atienza of Buhay being Pacquiao’s running mate.